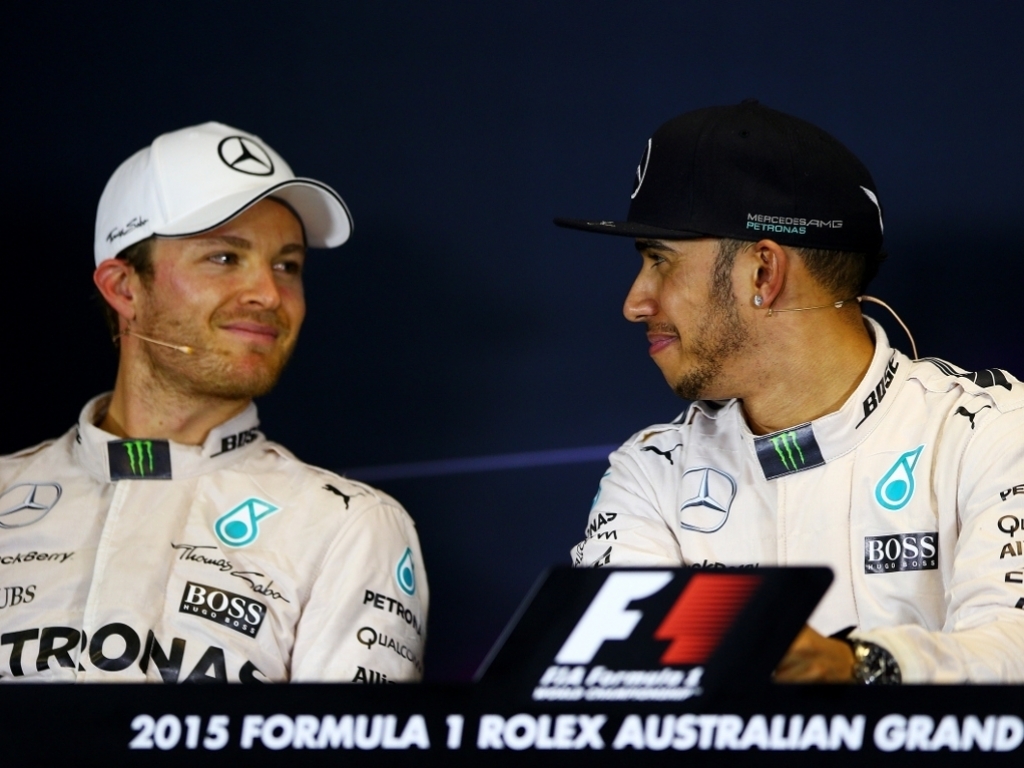 In F1, the first person you have to beat is your team-mate. Andrew Davies' Team-Mate Wars Returns for its 11th season.

Mercedes
Nico Rosberg 0 – Lewis Hamilton 1
Race: Hamilton
After the race Lewis was fulsome in his praise for the Mercedes engineers at the circuit and the technicians back at the factory who had found a whole different set-up solution from Friday to Saturday. Much of the time, drivers’  plaudits "I’d-like-to-thank…" sound routine or coached, but for once this sounded heartfelt. It was a set-up he used for supreme control.

Plus he got away with one of the most damning lines you could ever say to a Hollywood god; "Man, I thought you were taller" – to Arnie on the podium, in case you missed it. Let’s hope they don’t have Sylvester Stallone or Tom Cruise (in a reasonably priced F1 car) up there any time soon.

Until we get to see either of the Mercedes cars delayed we won’t get to see their true race pace with the engine at full chat and not in mild-self-preservation mode. The manner of their victory doesn’t bode well for the rest of the season, and the manner of Hamilton’s quantum leap from Friday to Saturday doesn’t bode well for the rest of Nico’s season.

Red Bull
Daniel Ricciardo 1 – Daniil Kvyat 0
Race: Ricciardo
Despite the much-reported "driveability" issues, Dan managed to put his car into Q3. Falling back from a Sauber in the race didn’t look particularly heroic, but knowing what he’s capable of, it was probably an Alonso-like performance to get that far up. Kvyat missed a whole chunk of track time thanks to his Renault engine, and when his gearbox failed on the way to the grid Red Bull were keen to suggest that it might have been an engine vibration that caused it.

Williams
Valtteri Bottas 0 – Felipe Massa 1
Race: Massa
The lap times in Q2 on Saturday gave us a small glimpse of what it might be like for the Ferrari vs Williams duel all this summer.

Ferrari
Sebastian Vettel  1 – Kimi Raikkonen 0
Race: Vettel
This race could have been so different if Raikkonen had been a bit more brutal into Turn 1. Kimi got the jump on Seb at the start but mindful of contact in the first corner he backed off to let Seb through and as a result got bumped and jostled by the pack and demoted to 8th. He recovered, only to have a left-rear wheel problem at the pit-stop which ultimately accounted for his race after the second pit-stop, when it wasn’t seated properly. However before that time he put in a string of fastest laps in his fight back up through the field that will have Kimi fans in full attendance for Malaysia. As with Williams, this battle looks like it will be joyously close all season. It could even turn into a Kubica vs Heidfeld ‘Boulder Brothers’ special.

McLaren
Jenson Button 1 – Kevin Magnussen 0
Race: Button
It must be a weird experience driving to a pace dictated by the temperature of your MGU-K unit, which is basically what Jenson had to do. Despite radioing in that the temperatures were up toward the end of the race (and has anybody noticed that there seems to be an extra lag between what’s happening on track and the radio message being broadcast, or is it just me? We got a message, something like "Box now! Box now!" and the car had already pitted) Jenson was still able to push and get PBs, including the very last lap. So not all bad news. It was probably a good job that Fernando Alonso didn’t travel all the way to Australia to complete a handful of laps and then trundle into retirement on the parade lap. That was best saved for Kevin.

Force India
Nico Hulkenberg 1 – Sergio Perez 0
Race: Hulkenberg
No longer penalised for being Hulk The Bulk, Nico should edge clear of Checo this year. In the race, Perez suffered from an inadvertent pass on Marcus Ericsson which made him drop places, and it was one of those afternoons that one small error can have compound effects.  Because then he was thrown back behind Button etc etc.

Toro Rosso
Dutch Puppy 0 – Spanish Puppy 1
Race: Carlos Sainz Jr.
Being shaded by your team-mate at a much-hyped debut will be no bad thing for Max Vertsappen. It will hopefully switch media attention away and let him get on with what he seems to have a god-given talent for. Neither looked like rookies and neither made rookie mistakes. Yes, Sainz jr. touched Raikkonen at Turn 1 but Kimi was braking more than he wanted, and that showed when he lost a bunch of places as a result.

Lotus
Pastor Maldonado 0 Romain Grosjean 1
Race: Grosjean
Grosjean takes it on qualifying performance in Q3. Whereas he was challenging the Toro Rosso and Red Bull, Maldonado was almost a second further back. In the race, neither completed the first lap, but as usual in TMW, if push comes to shove we’ll take a promising installation lap as a sign that one driver is better than another.

Sauber
Felipe Nasr 1 Marcus Ericsson 0
Race: Nasr
Felipe Nasr had a charmed opening lap, bouncing his tyres through a gap between Maldonado and Raikkonen as both closed on each other, leaving the Brazilian nowhere to go. He survived and then drove brilliantly under pressure to claim his first points. Autosport had a lot of fun with ‘Sauber Facts’ in their excellent coverage of Live testing from Barcelona, but here’s one I don’t think anybody’s nailed. Had Giedo van Der Garde started for Sauber instead of Ericsson – when was the last time that two Dutch drivers started an F1 race…?

Star of the race
Felipe Nasr 1

Arse of the Weekend
Christian Horner
For suggesting that we needed engine equalisation after the very first race, when:
a) Ferrari look to have done pretty well at improving theirs
b) It’s only the first race<
c)There is now a whole system in place that he fought for last season to equalise engines throughout the year. What’s going on, Christian? First suggesting a ban on wind tunnels, now engine equalisation, this is F1 socialism!

More Media watch
James Allen on Radio 5 Live was concerned about the wind in Melbourne: "Down there in the pitlane, trying to keep his hairpiece on, is Tom Clarkson…"
TMW says, if it can survive being thrown into a swimming pool by Norbert Vettel in Monaco and stay attached, then a little bit of Aussie wind won’t threaten the fixative.

James was also worried about a bird that seemed to be roosting very close to the racing line: "The unflappable bird is still down at Turn 3 as Felipe Massa flashes past in his Williams."

McNish-ion Impossible – The Collected Allan McNish
"They wanted to give their drivers some possibility early on in the season."
"It’s tricky, that corner, the wind is playing a factor."
"The temperature of the total tyre is a difficult thing."
"The cars are very complicated – from an elecs-tronics point of view."
"This is one of his expertise in his later years, keeping people behind him."
"And a nice round of applause as he climbs off the cockpit of his car."