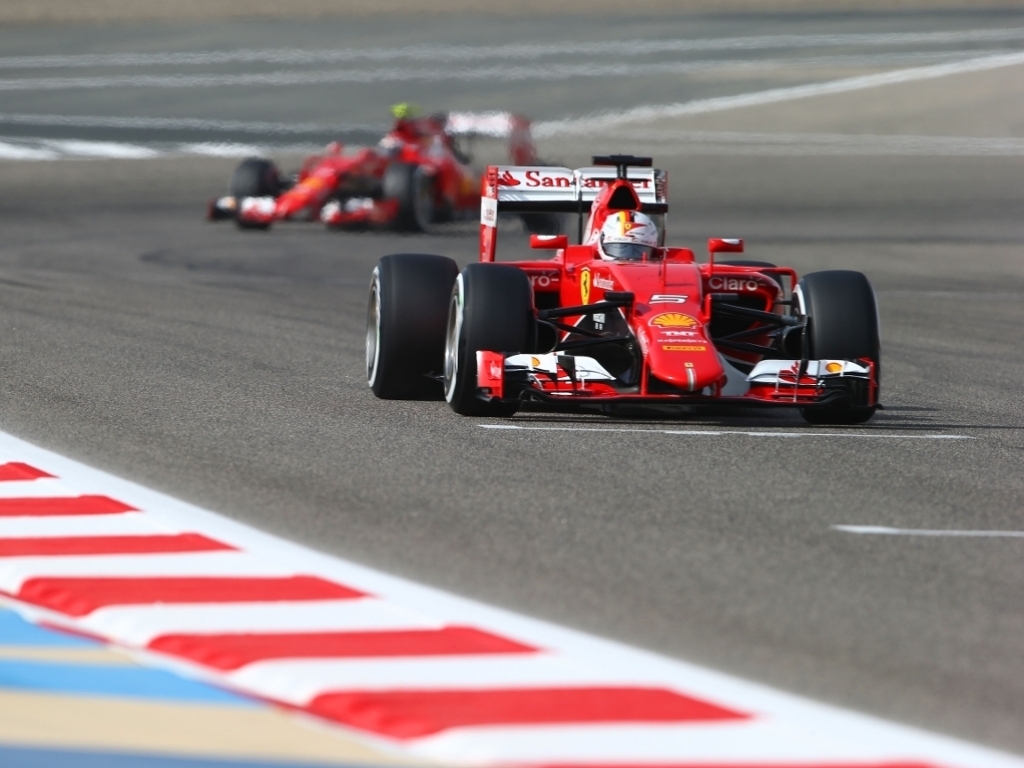 In F1, the first person you have to beat is your team-mate. Andrew Davies' Team-Mate Wars bows out for the final time.

Mercedes
Nico Rosberg 0 – Lewis Hamilton 4
Race: Hamilton
Not a particularly difficult call, this one, Hamilton was in control…
Smart observers will  recognise that this is the first sentence from TMW last race, and it may be a case of leaving it there all season. This was a grand prix in which Rosberg had to make an impact and a circuit where he had taken pole position before, so it shouldn’t have been beyond his skill set to dent Hamilton’s massive wave of confidence. If you can dent a wave, that is.
If it keeps going on like this Mercedes are going to have to start deliberately putting Lewis onto the wrong tyre in pit-stops, just to stretch him a little bit.

Red Bull
Daniel Ricciardo 3 – Daniil Kvyat 1
Race: Ricciardo
A combination of Kvyat’s failing Renault engine and some ill-judged kerbs kept Daniil in Q1 for the first time in his career. Thus Ricciardo was able to emphasise the gap between them when he put in a familiar brilliant qualifying to take P7 on the grid. And this time he didn’t stuff up the start. Kvyat’s coming under criticism after just four races  which is plain crazy, given what he displayed last season and given the depth of problems with the engine.

In the BBC trailer before the race, they showed a clip from the Year 2146, of a father and son in traditional Arabic dress riding across the desert  on camels and standing on top of where the Sakhir circuit once  stood – now buried in sand. The father told the son of the legendary duel in the desert between Hamilton, No.44 and Rosberg No.6, and then proceeded to dig out two wing end-plates, a No.44 and a No.6. It was total rubbish – he wouldn’t have been digging out £8 000 of F1 memorabilia…no…he would have been digging up angrily discarded Renault engines…

Williams
Valtteri Bottas 2 – Felipe Massa 2
Race: Bottas
Bottas had already outqualified Massa when the Brazilian discovered a glitch that sent him to the back of the field. However Bottas’s assured defence of P4 from a run-out-of-ideas Sebastian Vettel was one of the drives of the season.

Ferrari
Sebastian Vettel  3 – Kimi Raikkonen 1
Race: Raikkonen
At last! Kimi finally got to do what he’s been threatening to do ever since he got his hands on an SF-15T, race like the Kimi of old and not worry about his turn-in. What’s more, with Seb’s ability to qualify in front of his team-mate, we should watch out for some Ferrari on Ferrari action soon. Which will be fascinating, because when he was at Red Bull, Seb was like the favoured son. This time round the mantra is certainly more ‘the team comes first’ and so how Vettel behaves in that situation will be fascinating to watch.

McLaren
Jenson Button 1 – Fernando Alonso 2
Race: Void
Another grisly stat to add to the cache of horrors that McLaren are collecting this season. For a driver who didn’t crash his car in any of the sessions, and whose car could exit thepitlane, 17 laps (or thereabouts) must be one of the lowest totals of laps ever amassed for a driver over a GP weekend. Jenson’s failure to get out in Qualifying or the race makes it no-contest.

Force India
Nico Hulkenberg 1 – Sergio Perez 3
Race: Perez
Sergio has gone well here before, and so it proved once more.

Toro Rosso
Max Verstappen 3 – Carlos Sainz 1
Race: Verstappen
Sakhir has never been a happy hunting ground for Toro Rosso and so it proved, though more from a sheer ‘this ****ing thing doesn’t work properly’ than a ‘we can’t find the right set-up’ angle. I’ve been taken to task for suggesting that they are using a Renault Scenic or Renault Twingo engine. Mr. G. Richardson from Long Ditton has pointed out it’s actually a Velsatis (they had to do something with all those old units).

Lotus
Pastor Maldonado 1 Romain Grosjean 3
Race: Grosjean
He doesn’t disappoint, does he, while Romain was quietly getting on with amassing the Lotus haul of points, Pastor was trying to put his car into the highlight tapes. However, when he was hit by Verstappen early on, it was four races out of four where someone had hit him. Surely there’s a career waiting for him in car insurance fraud. Maybe the experienced crew at Enstone are considering brake lights for him.

Sauber
Felipe Nasr 4 Marcus Ericsson 0
Race: Nasr
Despite the score, there’s actually not much in it between the two Sauber drivers. Felipe Nasr had a brilliant race in a year where rookies don’t look like rookies.

Arse of the Weekend
Ron Dennis/Eric Boullier
The buck has to stop with the boss and the litany of small problems that afflicted Jenson Button’s car made it look like McLaren were a FF1600 debutant team attending their first circuit race, not one of the mightiest teams in the history of the sport. The question is… will Bernie withhold money from the team as he threatened to do with Manor in Australia…?

Anyone say – “It is, what it is”? Fernando Alonso (although actually he said, “It is, where it is”)

More Media Watch
Suzi  Perry to Eddie Jordan “You were just touched on the front there.” (then had to stifle giggles)
Eddie Jordan talking about Nico Rosberg’s race prospects: “We’ve seen him bottle out of situations where he could have gone 50/50.”
Suzi Perry: “Let’s bring in our three-times Le Mans winner Allan McNish – he likes to be called something else doesn’t he – he likes to be called ‘The Love Lord’” cut to Allan McNish wishing that his iPad would beam him up, Scotty.

Again, it’s a big ”Adios!” from Team-Mate Wars (and very gratifying to see that Autosport are using the term now) as we head off to OffonF1.com for the next race. Goodnight, and thank you for your company. Especially Mr. G. Richardson of Long Ditton.)