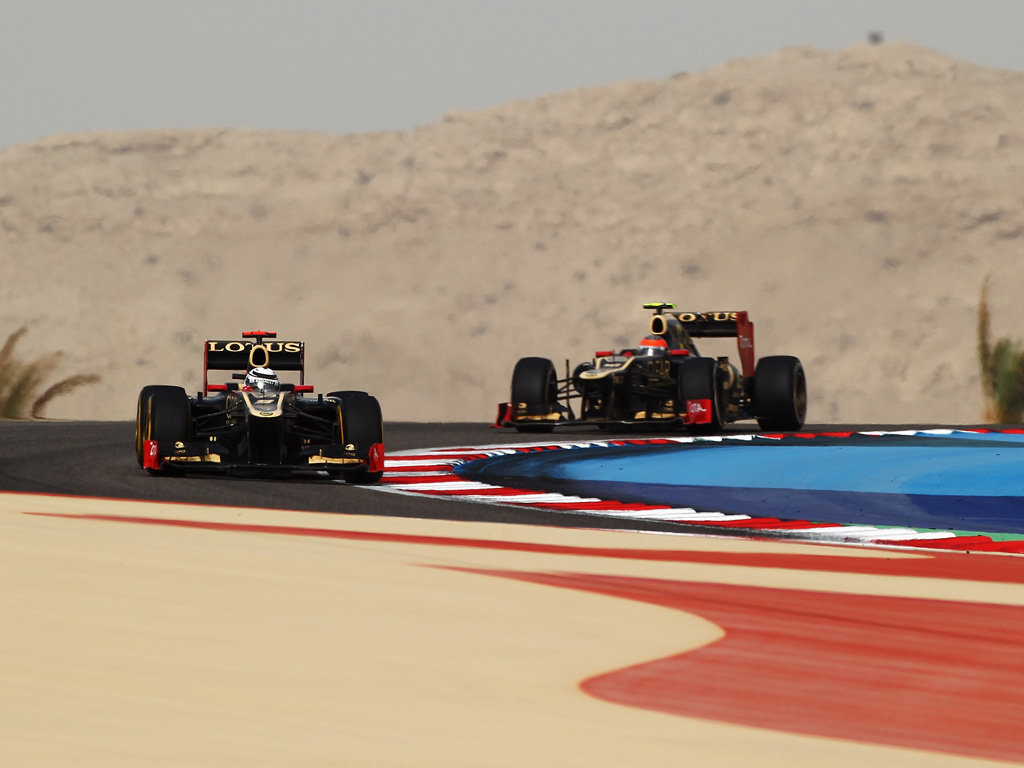 Paul and Fernando continue to dominate their team-mates, but Seb is showing some ominous form and the stewards may be changing tyres soon…

Red Bull Racing
Race: Vettel
Season: Sebastian Vettel 2 – Mark Webber 2
The 2011 Vettel was back – no longer fretting about the exhausts or tyre temperature, just driving the cahunas off the car. It’s wrong that we (talking about the PF1 office now, not you, gentle unprejudiced reader) should dislike the fact that he’s so damned good, but displays of virtuosity in F1 aren’t like violin solos where you can appreciate every thrilling nuance, they’re just a bit dull. Come to think of it, we’re not that big into violin solos. For the first time this season Mark Webber was thrown back into the orchestra to play a distant supporting role – almost Massa-esque.

McLaren
Race: Hamilton
Season: Jenson Button 2 – Lewis Hamilton 2
From a driving point of view, they did as well as they could. From a team point of view it was verging on the Mercedes-in-Malaysia. Although Jenson raced in front of Lewis for most of the grand prix until his retirement he only got there because the left-rear tyre guy held onto Lewis’s nuts for way too long. They should maybe put Nicole on his left rear tyre gun, that would put an end to that.
Actually, come to think of it, just imagine how long it would take the race stewards to change a left rear tyre. Car comes in. Up on jacks. Right and left front tyre off and on. Set! Right rear tyre off and on. Set! Left rear tyre…? “Stewards, what the f*** are you doing?” “Well, that’s correct we do have a left rear tyre situation which we’re going to investigate shortly. Let’s have a good long look at it first, though. Maybe we should view it from a few more angles and see if it actually NEEDS changing. And before we do anything we have to type up on screen that we’re going to change the tyre and Didier is only a two-fingered typist. Somebody wake him up and turn the computer on. We’ll be back with you as soon as we can. Look, actually, do you mind if we change if after the race…”

Mercedes
Race: Rosberg
Season: Michael Schumacher 2 – Nico Rosberg 2
Having watched Michael’s RFA/DRS all the way round his qualifying lap it must have failed at the very, very last moment. You still have to think that Merc weren’t expecting Heikki Kovalainen to go one second faster than Petrov in the closing stages and put Michael out. The mechanics were surely repairing it ready for Q2 not to get him out again in Q3. Even Vitaly Petrov was surprised at the gap pulled on him by the little hobbit.
As for the race, Nico Rosberg took up the mantle of The Schum, a bit like the young warrior in battle who picks up the sword of the fallen veteran and brandishing it shouts: “they shall not pass”. A bit of the old Gandalf/Schumacher mentality. He was very fortunate to keep his result but a great result it was for Mercedes showing that they can keep their tyres in both hot and cold conditions.

Ferrari
Race: Alonso
Season: Fernando Alonso 4 – Felipe Massa 0
Felipe will take great heart that he was not so far away from Fernando at this race. What’s more he got a blinding start. Leaving the line with Felipe’s onboard camera was an absolute joy – almost like starting with a bunch of GP2 cars. In the race he caught up with his ‘old illustrious’ but whether he could have passed him or not is another matter. Fernando had an odd race. When Kamui Kobyashi disappeared down the pitlane it was almost like he had a tow rope attached to Fernando’s car. As Jenson Button said (about Lewis) in Canada last year: “What IS he doing?”
He had every right to be aggrieved and react as strongly as he did to the move put on him by Nico Rosberg. The stewards (eventually) decided that what he did to Fernando was tough but fair. It’s hard to work out how that sits with regulation 10.4 (see Winners + Losers) but expect Olympic-Opening-Ceremony- size fireworks if El Nano does that to someone else and gets penalised.

Lotus
Race: Raikkonen
Season: Kimi Raikkonen 3 – Romain Grosjean 1
Kimi was back to his brilliant best in Bahrain. Sebastian acknowledged after the race that he maybe wasn’t going to put a good result in too much jeopardy by trying every known defence – “Usually you know he doesn’t mess around” said the current World Champ smiling. Romain Grosjean, considering he got away with a large amount of wheel bashing in Shanghai showed a positive aggressive approach in dealing with Mark Webber and Lewis Hamilton. Eric Boullier has certainly found his Kubica replacement in Kimi.

Force India
Race: DiResta
Season: Paul DiResta 4 – Nico Hulkenberg 0
It wasn’t spectacular – as Sauber has long proved by eeking out points from less tyre stops than the front-runners – but that could well have been Paul Di Resta’s best ever F1 race. Nico Hulkenberg was further back than usual both in qualifying and a race in which he had more tyres to play with.

Williams
Race: Senna
Season: Maldonado 1 – Senna 3
Pastor Maldonado is proving to be the go-to man for onboard action in races. In Bahrain he was again spectacular and even retired spectacularly and you can’t ask much more than that. With the flyaways finished till Canada the Williams factory at Grove can at last breathe that much easier knowing that spare parts are closer at hand. Neither car looked as competitive as they had done in the cooler races, but Monaco will be here soon and who wouldn’t want to be onboard with Pastor for that.

Torro Rosso
Race: Vergne
Season: Daniel Ricciardo 1 – Jean-Eric Vergne 3
Daniel Ricciardo showed how easy it is to go from good news to bad news in less than a lap. Getting tagged by the little hobbit Heikki Kovalainen didn’t help, but he should have been miles away from the scene at the time. Considering Jean-Eric had the same machinery and qualified in P19 (13 places below Daniel) to finish in front of the Aussie says less about his ability than Ricciardo’s catastrophe. Though Jean-Eric could point to the fact that Michael also qualified 13 places behind his team-mate.

Caterham
Race: Kovalainen
Season: Vitaly Petrov 3 – Heikki Kovalainen 1
Kovalainen put in a truly wonderful qualifying lap. To be one second ahead of your team-mate is a hell of an achievement even if Vitaly does take the more pragmatic approach of saving tyres for the race. Starting where he did put him alongside Daniel Ricciardo and an ambitious overtaking move round the outside of the Aussie at Turn 10 (where everyone runs wide) didn’t look like coming off, and didn’t. The shredded tyre put him a long way behind but by Lap 47