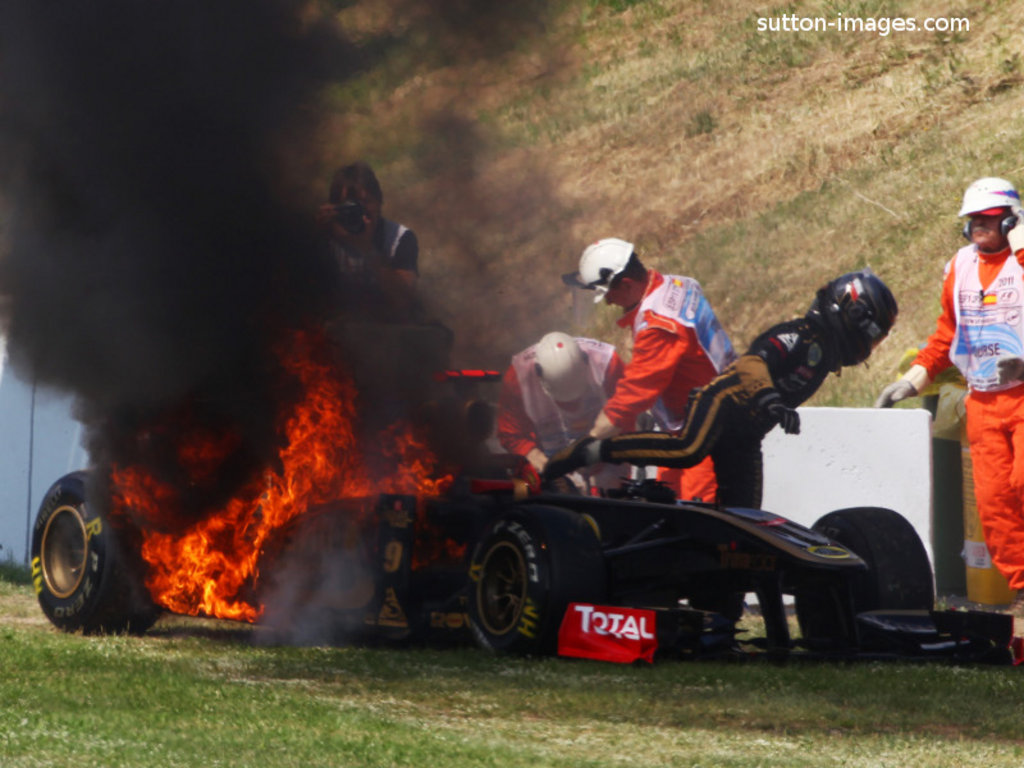 Schumi got a point back but he’s still waiting for Big Joy. Nick’s not a whoppa, but getting flame-grilled didn’t ruin his weekend…

Red Bull
Season: Webber 1 Vettel 4
Race: Vettel
This was supposed to be the fightback race, and if there is one pole that’s normally guaranteed to give you a great result other than Monaco and Hungary, it’s Barcelona… Mark’s got one race left to start turning round his season.

McLaren
Season: Hamilton 4 Button 1
Race: Hamilton
Both Button and Hamilton should have done a lot better off the line. Lewis was actually quite lucky to hang onto fourth place at the first corner. Had he got in front of Seb instead then he could have won the race. Button’s third place must have been a relief after the dodgy start he had. Looks like someone in McLaren got their clutch calculations wrong in Barcelona. (Though clearly not the same bloke in charge of strategy.)

Ferrari
Season: Alonso 3 Massa 2
Race: Alonso
Fernando had the start of the year and perhaps one of the most crowd-pleasing starts of all time. He toughed it out with Webbo superbly before going backwards very quickly. Massa never seemed to recover from the moment he got out on the track in Q1 and had to use a set of soft tyres.

Mercedes
Season: Schumacher 2 Rosberg 3
Race: Schumacher
Gloomy Schumi wasn’t happy with the handling of his car and its clear from Norbert Haug’s comments that he thinks the Mercedes car should be doing a lot better. Michael hung onto the TMW points by dint of Rosberg’s failed rear wing activation and no radio for Nico meant he was left alone to go ‘eeny, meeny, miny moe’ with his steering wheel buttons for a whole race. It would have been interesting to see a bit more of his pitboard.

Renault
Season: Heidfeld 3 Petrov 2
Race: Heidfeld
Heidfeld’s on the move now and even a flame-grilled chassis wasn’t going to stop him carving through the field. It’ll be interesting when he qualifies as high as Petrov.

Williams
Season: Barrichello 4 Maldonado 1
Race: Maldonado
Pastor faded and Rubens never really got going. At least Sam Michael can take some small comfort that he’s not the only technical director being wrung out to dry because of his team’s lack of performance. With Aldo Costa moving on at Ferrari after five races, F1 is beginning to look like the Premiership. How long before someone says “it’s a results based business”.

Force-India
Season: Sutil 1 Di Resta 4
Race: Di Resta
Di Resta’s strategy didn’t work out for him after he got up as high as fifth during some phases of the race. He outqualified Sutil again as well and is proving to be an immense rookie. To do what he’s done after racing in DTM for so long is staggering. Almost Clark-esque.

Sauber
Season: Perez 2 Kobayashi 3
Race: Perez
Both Sauber drivers have no fear – which is probably why they pick up the most first lap problems. Perez was back on form after a period notching up experience on that old learning curve, while KK had another of his banzai charges.

Lotus
Season: Trulli 1 Kovalainen 4
Race: Trulli
Jarno got the better of Heikki for once. And he needed to.

Boring versus Exciting GPs
Boring 1 Exciting 4
It’s official. F1 can be interesting anywhere with the new 2011 rules, even when the FIA get the DRS zone wrong. It almost makes us curious as to what those slippery varmints, the Pirellis, would do on that sandy Sakhir circuit.

Eddie Jordan Man of Wisdom or Complete Arse?
Man of Wisdom 3 Complete Arse 1
EJ knows there’s something not right with that Peter Schmeichel Schumacher, the Danish goalkeeper driver hybrid. When Eddie predicts something, it’s always a good move to go to the betting shop and put money on the opposite happening. Unless it’s anything to do with the initials SV.