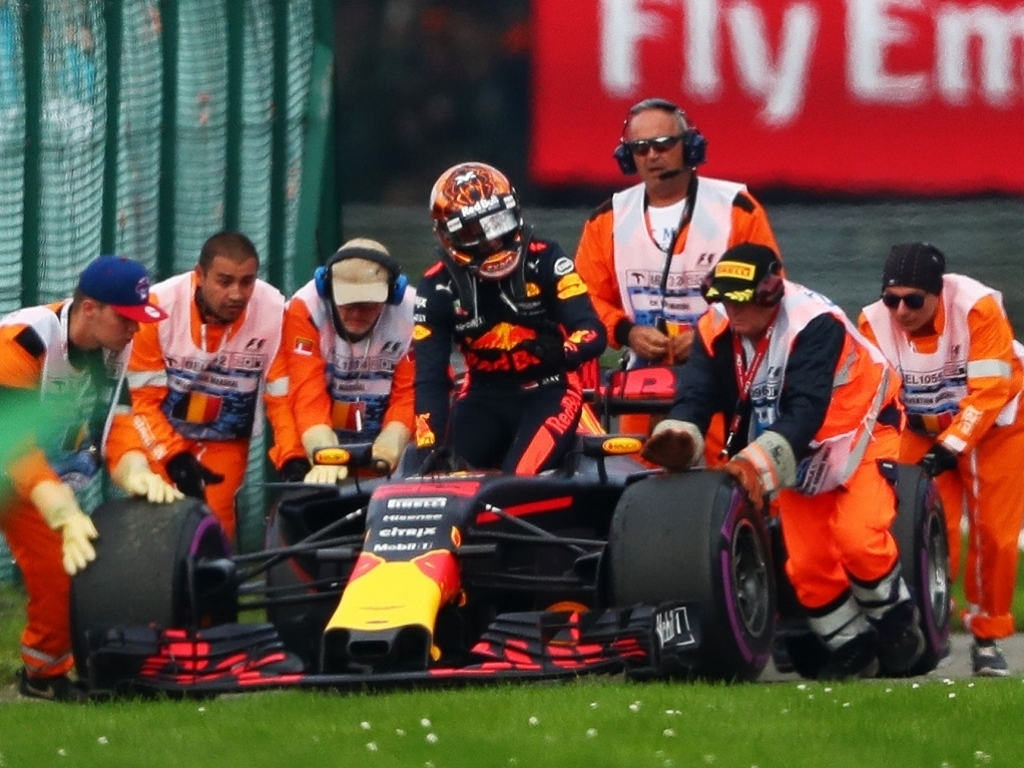 Max Verstappen may have only seen seven complete laps of the Belgian GP but there is some consolation as he still scored Red Bull’s team-mate war point.

Mercedes
Hamilton 9 – Bottas 3
Race: Hamilton
One of Lewis Hamilton’s best race weekends, the clear advantage that Mercedes was supposed to have didn’t show up, yet still Lewis contrived a win. The ‘Hamilton factor’ was amply demonstrated by Valtteri Bottas’s failure to put himself ahead of both Ferraris in qualifying and challenge Vettel in the race.

It’s clear now that Mercedes have got to play team orders even if it means Bottas taking a hit on his results. If the last two GPs had been run in reverse order and we had Spa before Budapest, there’s no way that Mercedes would have let Lewis give the Hungarian GP podium back to his team-mate. The Finn is edging back towards No.2 status.

Ferrari
Vettel 7 – Raikkonen 5
Race: Raikkonen
Ferrari is a bit like the (British) National Health Service right now. NHS hospitals suffer from old people who they can’t send home, or ‘bed blockers’ as they’re known, and Ferrari have a couple of old gits who won’t give up their seats. With the knowledge that the Scuderia have re-signed Vettel and Raikkonen for 2018, the young hopefuls on the Ferrari driver programme have been blocked yet again.

But the evidence from Spa was that the old gits are doing just fine. Raikkonen for once admitted that his car was feeling “nice”, although that was before he got the penalty for ignoring yellow flags. We then got a classic: “what do you mean – he was on the side of the road!” which is generally where cars end up if there’s some kind of a problem. He and Seb had traded fastest times in practice and qualifying, so he’s still got the ability

Vettel was oh-so close to pulling off a drafting move on Hamilton on the re-start, but got too close through Eau Rouge and had to lift slightly. That was all the Mercedes needed to keep ahead and there it was, the moment gone.

But Monza will be another battle.

Red Bull
Max Verstappen 9 – Daniel Ricciardo 3
Race: Verstappen
Even though Max’s race ended in a judder on the run up to Les Coombes he’d already outqualified his team-mate and was ready to put pressure on Raikkonen. The podium that his team-mate eventually claimed would have been his if it had been Ricciardo who had parked at the side of the Kemmel Straight.

From a team point-of-view he helped score them a podium. If he hadn’t had a DNF there, then Raikkonen would never have collected a penalty that put the Finn behind his team-mate.

Force India
Sergio Perez 7 – Esteban Ocon 5
Race: Ocon
Sergio Perez treated us to one of the finest brains-up-yer-arse moments of his GP career. Ocon may have collided with him on the opening lap, but that was in the midst of a midfield melee as two sets of cars aimed for the apex on the run down to Eau Rouge three abreast. Again the Force India showed that in build terms it is the Challenger tank of F1 machinery.

But the second incident on Lap 29 was disgraceful. It showed that Checo (or should we call him Beppo or Chico) would sooner have an accident than let his team-mate get past him. And obviously the descent to Eau Rouge is not going to be anybody’s preferred spot to barrel role an F1 car, even it is the sturdiest on the grid.

Williams
Felipe Massa/Di Resta 11 – Lance Stroll 1
Race: Massa
Williams were disappointing in qualifying at a track where the Mercedes grunt should have made them vying with Force India for best of the rest. Thanks to the internecine warfare at Force India and problems for others, Massa was able to muscle his way into the points; Stroll almost.

McLaren
Fernando Alonso 10 – Stoffel Vandoorne 1
Jenson Button 1- Stoffel Vandoorne 0
Race: Alonso
The wasted resource that is Fernando Alonso made a great start to the race, but he knew in his heart of hearts what was coming next. He made a valiant attempt to rescue P7 after Hulkenberg got past him, but it was only a matter of time till the DRS crucified the McLaren-Honda’s performance.

Vandoorne’s drives are getting better; though in Qualifying, having already received a 40-place grid deduction, he was only there as a towing device.

Toro Rosso
Carlos Sainz 9 – Daniil Kvyat 3
Race: Sainz
Sainz outqualifed Kvyat in what is becoming a super-concentrated midfield, however he dropped three places at the start forcing him to run longer on the Ultrasofts to make them back. But he made it work. Kvyat started his race somewhere near the Dutch border and as the press releases often say “enjoyed some good battles” which is code for, ‘didn’t get into the points’.

Haas
Romain Grosjean 6 – Kevin Magnussen 6
Race: Grosjean
Grosjean made the most of his Ferrari power, and helped deliver 7th place which exceeds their points total for 2016 already. Magnussen was passed by Grosjean on track and unlike the fractious Force India brothers, just let it happen. The Dane went straight on at the re-start, flat-spotted his tyres and had to come in again.

In the race Nico Hulkenberg got a much better start and Palmer slid back. Though the under-pressure Brit did give us a fine comedy moment. Having pushed Alonso wide and off-track at the exit of Les Combs, Alonso came round the outside and returned the favour, at which Jolyon exclaimed: “Oh come on! Alonso just took me right off the track!”

He should send his butler round to the McLaren motorhome to have a word.

Star of the Race: Lewis Hamilton
Overtaking Move of the Race:  Lap 2: Fernando Alonso on Nico Hulkenburg in a three-way tussle into Les Combs. Worth the price of admission in itself.
The Maldonado Award: Sergio Perez. It’s difficult to recall if Pastor did anything as dangerous as Perez’s squeeze of his team-mate against the barrier in his time in F1.
The Last Word: Fernando Alonso: “I really don’t care about the gaps – this is like a test.”