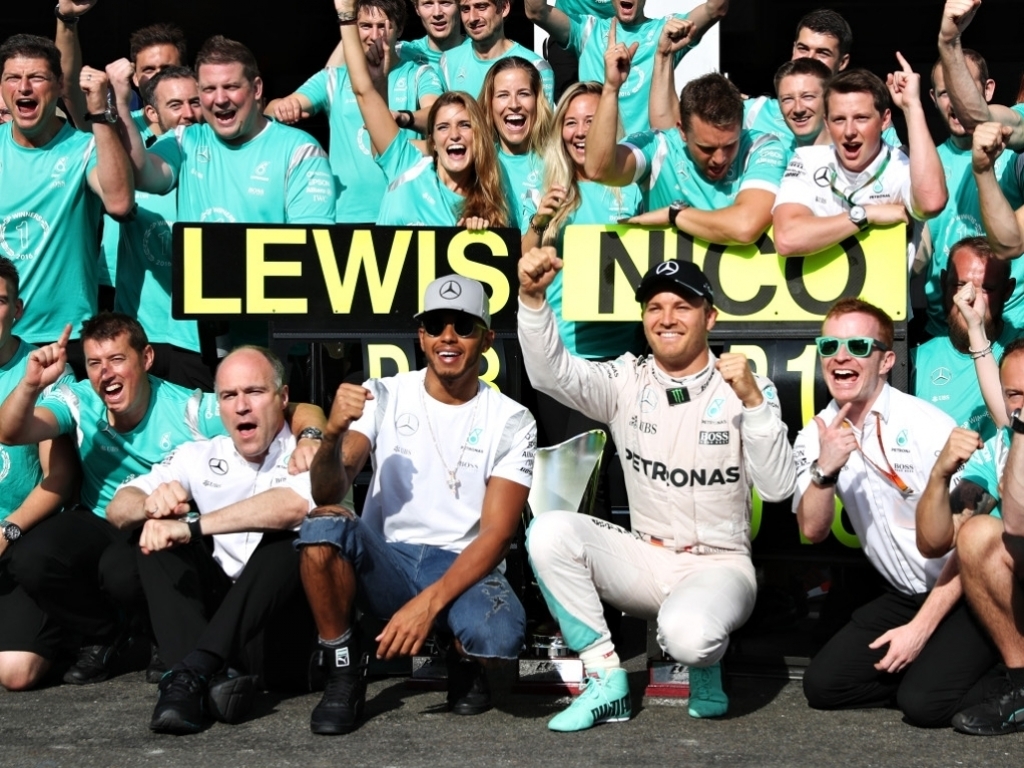 Nico Rosberg edges Lewis Hamilton in the Mercedes battle while it is now time Christian Horner had a serious chat with young Max.

Mercedes
Race: Rosberg
Season: Lewis Hamilton 8 – Nico Rosberg  5
One of those difficult weekends when it’s hard to separate the team-mates, most of all because they had different agendas. Rosberg to amass points, Hamilton to amass engines.

On the face of it, Spa, with the longest of high-powered laps, should have revealed the biggest time difference between  Mercedes and its pursuers. However things were a lot tighter at the front and a few have suggested that this is because Lewis Hamilton’s input to making the car the quickest it could be was missing.
All Lewis was interested in was race-pace and breaking a lot of W07s for spares and repair while Rosberg was left to lead the set-up work on a track that was voraciously consuming super-soft tyres.

Ferrari
Race: Raikkonen
Season: Vettel  8 – Raikkonen 5
Raikkonen  outqualified Vettel and would almost certainly have led him out of La Source if it hadn’t have been for the epic blundering of his team-mate.

For someone who likes serial moaning about other drivers, Vettel should have been hauled over the coals for his first corner move. In fact he was spectacularly fortunate not to get hit into the bargain.

Had that been Verstappen coming round the outside, or Werhlein, or Gutierrez, cutting the apex and effectively ending the chances of a podium for three drivers then there would have been a furore. Vettel is a four-time World Champion and he definitely knew better. Were there any  stewards actually watching that race?

Raikkonen recovered from a fiery plank (not every week you can say that) to get into the points, and despite one of the most dangerous mid-race moves from Verstappen you are likely to see, he kept his driving under control.

Red Bull
Race: Ricciardo
Season: Ricciardo 5 – Verstappen 4
Max may have outqualified Daniel, but they were on different tyre strategies, so it wasn’t a true match-up on the Saturday.

Daniel’s tyre management in the last stint was exceptional. It may not have made for good TV, but it dampened any thought that Lewis might have a late-race charge.

As for that incident on the Kemmel  Straight with Verstappen dodging onto Kimi’s line as soon as he saw he’d got close enough in the tow… Like Vettel’s first corner chop it beggared belief. What made it even more astonishing was that it was for something like 12th place, he wasn’t defending a win or a podium, and it was a multi-stop race, it wasn’t all-or-nothing Monza.

It’s one thing having a bit of a weave in the braking zone and annoying Kimi, but playing dodgems at 300 kph is even more frightening than being stuck in front of a Clare Balding box set without the ability o turn it off The Lavender Kill job.

There are many mysteries in gardening. Why do plants bolt? Why are some hydrangeas purple and blue? And why is the dog called ‘Nigel’ and the TV presenter called ‘Monty’ when really it should be the other way round.

Added to that, we can firmly add, why does my wife kill so many lavender plants? Those of you who have had the rib-dislocating pleasure of reading the Grumpy Gardener’s Handbook will know her as ‘Leaf Lady’ someone with an OCD compulsion to track down the owners of leaves who stray into our garden.

But that book  was written  when we lived next to Mrs MacDonald (aye laddy)  in Claygate and had a block paving frontage to maintain. Now we have a lawn and a gravel drive in front of the house she has realised  there are greater challenges.

It’s true, she still has it in for house plants. When unsuspecting house plants get taken back to our house th y don’t see the outline of a 1930s suburban house. They see the outline of the Bates Motel, accompanied by that screeching violin sound effect. She has a fearsome ability to bump them off that is second to none.

The reason for this is her bizarre watering regime. She employs what I like to call her ‘desert-mangrove technique’ for watering. When the exhausted plant finally withers and fails it’s put out on the back doorstep, a bit like in Game of Thrones when the Wildling babies are put out in the woods as offerings to the White Walkers.

She has always been a big fan of lavender –  all varieties – and loves to have them in the garden. The first years is not normally a problem, the plants bloom, are appreciated, and everything in the garden is…er…well, lavendery. It’s the tricky second year when problems arise. If she leaves them as they are, unpruned, they begin to look straggly and leggy the following year.

And so the following year she prunes them really hard. And then they die.

We buy some more. She splits her strategy and prunes some hard, some lightly, and gives some that old barber shop favourite, ‘the medium trim’. Both the lightly pruned and the heavily pruned lavenders die. The ‘medium trim’ escapes and is pictured above. Some of it has died, some if it has survived. It’s living, but it’s not really living.

This apparent lavender barbarism is not through lack of care either, she looks up ‘How to prune lavender’ videos on YouTube, takes advice from gardening friends, but all to no avail. We have never possessed a lavender more than three years.

I like to bolster her flagging morale by saying, “well, at least you’re not a 17th century perfumer, otherwise you’d be off to  the poor house, wouldn’t you.” It’s amazing how little things like that can help cheer up a gardening partner…

It’s time for Charlie Whiting to take Max aside and have some fatherly words. Christian Horner won’t do it because he hasn’t got the cahunas.

McLaren
Race: Button
Season: Button 5 – Alonso 7
It’s one of those weird ironies of TMW that even though Jenson didn’t get through Lap 1 he was still in front of Fernando Alonso when he got punted out of the race by Werhlein

Force India
Race: Hulkenberg
Season:  Perez 6 – Hulkenberg 7
Perez got a terrible start to compound the Hungarian GP’s terrible pit-stop. At the end of the season, the BBC used to give out a prize for the best start of the year (unofficially named the Felipe Massa Prize because he won it so much), but they should have one for the clunkers, too.

Toro Rosso
Race: Kvyat
Season: Sainz 7 – Kvyat 2
Sainz may have qualified in front of Kvyat but at least Daniil didn’t try to drive a car that had an exploded tyre and missing bodywork.

Haas
Race: Grosjean
Season: Gutierrez 4 – Grosjean 9
Grosjean benefitted from the fact that the stewards had yet to arrive back from some lavish hospitality when the race started and didn’t see him skip across the corner at Les Combes and makplaces. Ultimately he lost places thanks to the timing of the Red Flag so justice was ultimately done.

Renault
Race: Palmer
Season:  Palmer 5 – Magnussen 8
Kevin Magnussen looked to be trying just a little too hard to catch his team-mate in front of him as he bundled up the hill towards Radillon. The Dane rapidly turned his Renault R.S.16 into a collector’s item As Mark Webber so eloquently put it, “that’s not going to buff out.”

Manor
Race: Ocon
Season  Wehrlein 0 – Ocon 1
Wehrlein qualified well, whereas new boy Ocon was still finding his feet. And at 6’1” presumably Ocon was finding his feet were just a little bit cramped in the cockpit compared to 5’7” Rio Haryanto. However, unlike his team-mate he didn’t make a monumental mistake and run in the back of another car, then give the old ‘hand signals routine’ to make it look as though it wasn’t his own big fat fault.

Sauber
Race: Nasr
Season: Nasr 6 – Ericsson 6
It’s nice to return to write this column and my one regular correspondent, Mr. G. Richardson of Long Ditton, has written in to ask me why I never put very much about the Sauber team. Well, Mr. Richardson, there is some great onboard footage on the official F1.com site of Felipe Nasr’s start which shows his team-mate clearing a path for him, like a Tour de France sprint lead-out man, and Felipe jumps four cars.

Arse of the Race
Sebastian Vettel for the greediest of overtaking lines into La Source which compromised his, his team-mate’s and Max Verstappen’s races and robbed a lot of Dutch fans (especially young Dutch fans) the chance to see Max duke it out for a podium place.

Kimi’s Weekend of Speaking
Before the racing got under way at Spa there was a round of press conferences, something that you can

Allan McNish’s Adventures With Past Participles
Talking about Fernando locking up: “That wasn’t the first time he’s did it.”
Talking about Nico Rosberg’s attempts to run Max Verstappen off track: “It was similar to Austria in that he straighted him off.”

Jenny Gow: “That Renault engine, or that Tag-Heuer unit, as they were calling it before they had a modicum of success.”

Allan McNish: “Sergio Perez has got a very light foot.”

Jenny Gow reporting on Jenson Button’s Saturday trip to see the medics: “He was complaining of heat. I just hope Jenson doesn’t have chaffage in the posterior.”

David Coulthard (not) talking about mature singles: “My granny  was pretty racy I have to say.”

Allan McNish: “I was trying to do it with elephants, 1 elephant, 2 elephants, 3 elephants and I got to six elephants…” And you know what he was counting out there.