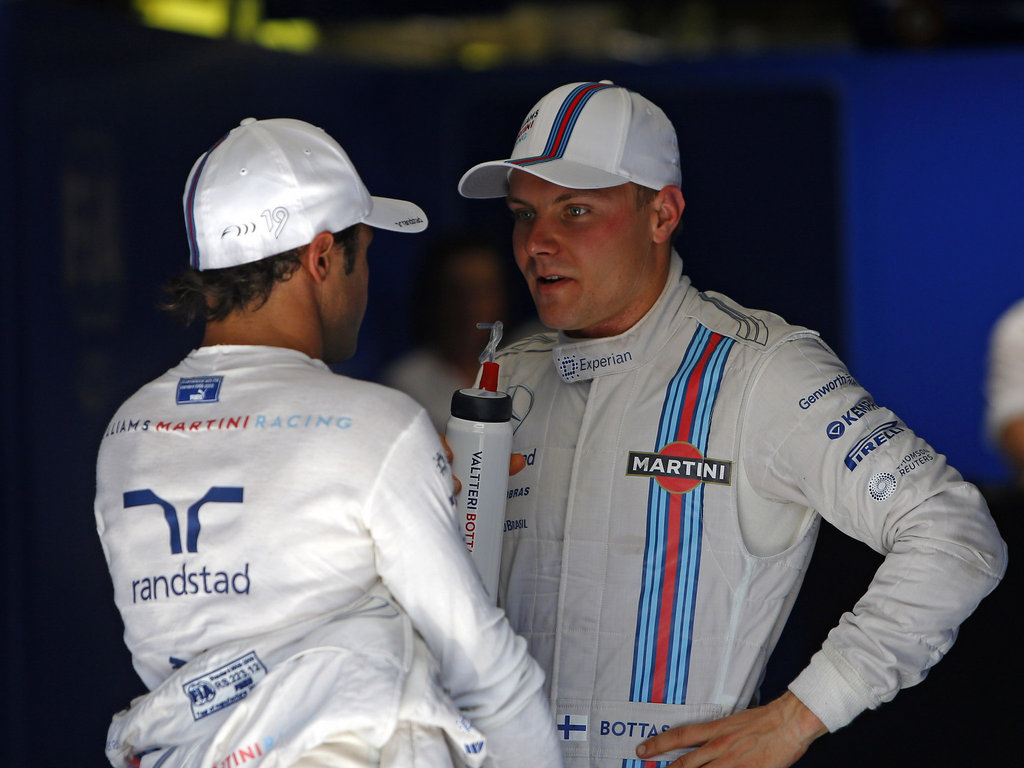 Mercedes
Nico Rosberg 4 – Lewis Hamilton 14
Race: Rosberg
Rosberg was a fraction up on Lewis Hamilton all the way through free practice but in Qualifying Lewis looked like he might just snatch something at the last second. In the end it was a front brake he snatched and the lock-up easily accounted for the less-than-a-tenth between the two of them on the grid. Rosberg’s get-away from the line was exemplary and though Hamilton kept closing him up in between stints, when it mattered most Lewis lost control into Turn 4 and he could never recover the ground. For 98% of GPs Lewis does have the edge. But it’s in that 2% window where errors occur that Nico might just edge the Championship.
We saw how careful Lewis can potentially be in Q2. He knew he had to set a time to get through to Q3, but he knew he’d be racing on those tyres, so he put in a 1:10.7 – on a new set – whereas Rosberg put in a 1:10.3. On his next new set Lewis put in a 1:10.2, showing just how ‘reserved’ he can be when he wants to be.
Red Bull
Daniel Ricciardo 13 – Sebastian Vettel 5
Race: Vettel
Daniel’s not a big fan of the Interlagos track, whereas Sebastian has won at the Brazilian track and of course had the miracle recovery in 2012. It showed both in Qualifying and the race with the increasingly-moany Seb grinding his way forward (after a first lap lapse) and Daniel’s suspension ultimately giving way under braking.
Ferrari
Fernando Alonso 15 – Kimi Raikkonen 3
Race: Raikkonen
Finally Kimi looked like he’d got the F14T where he wanted it. Which is in front of Fernando Alonso. Less of the understeer woes that have afflicted him for the majority of the last 17 races. The fact that he actually finished behind Fernando was not down to the Finn, but a mistake by the Ferrari jack man jumping a little too early. Given how long it took to overtake Kimi at the end of the race, Raikkonen would have lasted out.
McLaren
Jenson Button 14 – Kevin Magnussen 4
Race: Button
The difference between Jenson Button and Kevin Magnussen was more than the difference between Fernando Alonso and Kimi Raikkonen this weekend. Yet Ferrari can still afford to pay both. Rumour has it that when McLaren sign Alonso for 2015 they can’t afford to pay both Alonso and Button, so it will be Alonso and Magnussen next year. I wonder if Ron Dennis can think back to the time when Williams sacked Nigel Mansell. There was an exodus of British support for his team. Stand by…
Williams
Valtteri Bottas 9 – Felipe Massa 9
Race: Massa
Felipe Massa is visibly lifted by racing at home, and despite a comedy of minor errors still came home on the podium. In a weekend when one small person was doing his level best to **** up the sport we know and love, another was helping keep the faith with it.
Toro Rosso
Jean-Eric Vergne 9 – Daniil Kvyat 9
Race: Kvyat
Neither Toro Rosso looked as racy as they have done lately, but Kvyat was the racier of the two.
Force India
Nico Hulkenberg 11 – Sergio Perez 7
Race: Hulkenberg
It was going to be tough at Interlagos for Perez to beat Hulkenberg as this is a circuit where Nico has scored the most unlikeliest of pole positions, raced brilliantly in the past and, what’s more, Checo had a seven-place grid penalty to serve out. Hulkenberg delivered perfectly on the Force India two-stop strategy and even had some tyre-wear to go duking it out with Valtteri Bottas.
Lotus
Romain Grosjean 11 – Pastor Maldonado 7
Race: Grosjean
Romain just missed out on Q2 and was the quicker of the two Lotus drivers – however right now, the most serious issue for the team is not what is happening between Pastor and Romain on the track. This is entirely unrelated to a team-mate battle, but Maldonado has been particularly impressive when asked about his switch from Williams this year, not indulging in the cult of ‘what-might-have-been’. Grosjean certainly wins the battle of who is ‘Moaniest of the Pair’. In fact you could extend that down the grid: Mercedes – Hamilton, Red Bull – Vettel, Ferrari – Raikkonen, Mclaren – Button, Williams – N/A, Sauber – Sutil, Force India – Perez, Toro Rosso – Vergne, Lotus – Grosjean.
Sauber
Esteban Gutierrez 9 – Adrian Sutil 9
Race: Gutierrez
It must be a pretty strange feeling in the Sauber garage right now – Marussia’s closure meaning that they are almost guaranteed P9 in the Championship with two drivers who won’t be racing for the team next year. Gutierrez outqualified and outraced (pitlane starter) Sutil to make it 9-9 and so just as with Williams and Toro Rosso – it’s the final countdown in Abu Dhabi.
Caterham
Marcus Ericsson 2 – Kamui Kobayashi 12 – Andre Lotterer 1
Race: Ericsson
Marussia
Max Chilton 4 – Jules Bianchi 11
Race: N/A
Star of the race
Lewis Hamilton 8, Daniel Ricciardo 4, Sergio Perez 2, Jules Bianchi 1, Valtteri Bottas 1, Jenson Button 1, Nico Rosberg 1,
Overtaking Move of the Race
Lewis Hamilton 5, Daniel Ricciardo 3, Valtteri Bottas 2, Jenson Button 2, Nico Rosberg 1, Kamui Kobayashi 1, Sebastian Vettel 1, Nico Hulkenberg 1, Fernando Alonso 1, Jean-Eric Vergne 1,
Sat on the Naughty Step
Kevin Magnussen 4, Pastor Maldonado 3, Ecclestone 2 (for suggesting it would be no problem to lose cars off the grid – twice), Max Chilton 2, Christian Horner 1, , Kimi Raikkonen 1, Charlie Whiting 1 (safety issues in Germany), Perez 1 (the totting up system), Nico Rosberg 1 (Proving-a-point-gate).
Media Watch
“They’ve all been gazumped by a younger driver who’s put them on a sticky wicket whatever the state of play is…” Three Times Le Mans Winner, Allan McNish, doing the ‘metaphor mash up’ talking about Jos Verstappen queue-jumping other drivers in the Red Bull young driver programme.
“It’s a bit like if you put your hand on top of a sponge and move it around – that’s what the back end of a car feels like when your tyres are over the limit.” Allan McNish
Andrew Davies