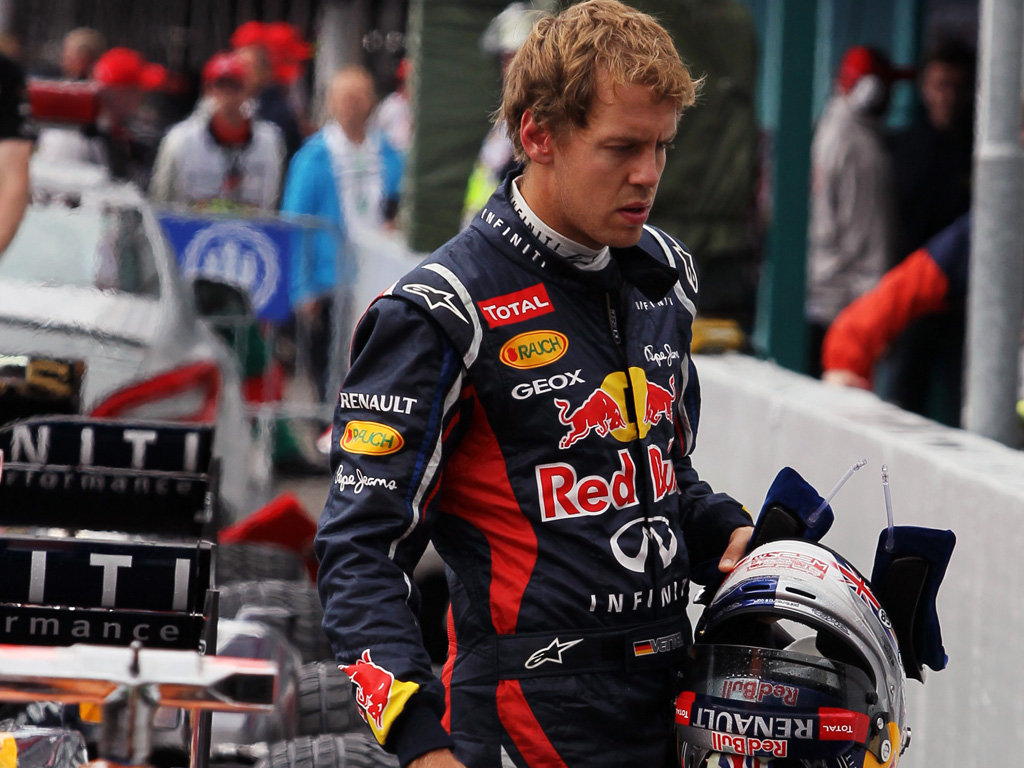 Red Bull Racing
Race: Vettel
Season: Sebastian Vettel 7 – Mark Webber 4
Just how rude can you be to your race engineer? We’ve heard expletives from Montoya and Raikkonen in the past (directed at other drivers, not the team); we’ve heard Lewis Hamilton get a bit chippy with Andy Latham about the choice of McLaren tyre strategy; we’ve heard Jenson Button getting whingey about the “B-a-l-a-a-a-a-n-c-e” quite a lot, and we’ve heard Mark Webber getting a bit sarcy “not bad for a No.2 driver” after a race. But I can’t ever remember a driver being this rude to his team. If you missed the race and the broadcast, Sebastian Vettel was tucked up behind Jenson Button and could see his chances of a race win evaporating in front of his eyes. There’s no great love lost between the pair of them, as we saw before the podium ceremony in Germany, so that might have added an edge. Vettel got on the radio and barked: “I can go much faster than him! So do something!” followed by an insistent command: “Try something, then. Try something!”
To which his engineer, Rocky, should have said, “Hey, quit that jibber jabber!” but sensibly told him “There are cars behind Sebastian, we can’t just do anything.” (“you craziest fool”).
It would be interesting to know if this was a familiar line of communication between Vettel and his engineer and that broadcasters have just failed to make them public in the past. We’ve heard him get slightly hysterical when things go wrong in the past. Sebastian’s reaction to a puncture is like an amateur pilot in a single engine plane when that single engine decides to stop. In a way it’s nice to know that even World Champions panic like the best of us, but shouting out your engineers needs some explaining by the Red Bull machine. It’s supposed to give you wings, not whinges. It was apparent that when he did have clear air and great tyres he was as good as he thought he was, but the PR damage had been done.
On the other hand Mark suffered a ‘diff failure’ which is Red Bull speak for “I can’t adjust the ride height of the car properly – where’s that handle again?”

McLaren
Race: Hamilton
Season: Jenson Button 3 – Lewis Hamilton 8
Jenson Button says he’s not ready to play the role of No.2 driver yet, but he should seriously think about it. He was on much fresher tyres than Senna but couldn’t figure a way past. The man who was always ‘much kinder to his tyres’ was hardly ever within 0.3 of the No.1 McLaren driver. Jenson’s delay behind the Williams probably only cost him a single place – both Lotus cars and Vettel looked faster.
Hamilton was virtually perfect from the lights, but needed that perfection to keep ahead of Raikkonen.

Mercedes
Race: Rosberg
Season: Michael Schumacher 5 – Nico Rosberg 6
It’s getting pretty desperate for the Mercedes team with Michael wrecking machinery in back-to-back grands prix, both drivers qualifying poorly and the top four teams galloping off out of sight. Any chance Michael had of beating Nico disappeared the moment he failed to get away on the parade lap. I wonder if that 2013 contract is signed?

Ferrari
Race: Alonso
Season: Fernando Alonso 11 – Felipe Massa 0
Alonso continued his season-long domination of Massa, but Ferrari will be quite happy to see it finish up as 20-0 provided Massa can shadow Alonso. He did a pretty good job in this race, almost outqualifying him and finishing just 12 seconds behind. Had he managed to deny Webbo some extra points then that would have been a bonus, but he wasn’t far off. His start wasn’t the best, which was unusual for Felipe (finishing Lap 1 two places down). Alonso as usual was nothing short of 100%, getting ahead of Kimi at the start and making the most of whatever chance came his way.

Lotus
Race: Raikkonen
Season: Kimi Raikkonen 8 – Romain Grosjean 3
Mr Miserable lost the chance of victory at the start when he got delayed behind Alonso. (Did he fail to set his KERS up properly?) If he could qualify as well as his team-mate then he’d be sorted. Kimi and Romain shared a moment later in the race when Raikkonen came out of the pits and gave Grosjean a ‘Kamui kiss’. Grosjean had no problem with it after the race, but it’s clear that both sides of the garage are locked in battle because Kimi was advised by his engineer to deploy KERS on exiting the pitlane.

Force India
Race: Hulkenberg
Season: Paul DiResta 6 – Nico Hulkenberg 5
Hulkenberg continued his fightback against DiResta’s early season lead. The Force India doesn’t enjoy tight and twisty circuits. Paul won’t have been affected by his barge from Maldonado, but did a very fair job of trying toget out of the way.

Sauber
Race: Perez
Season: Kamui Kobayashi 4 – Sergio Perez 7
Something that the TV broadcast didn’t dwell on, but was picked up by Jaime Alguersuari was Perez possibly lifting to allow Alonso past. Fernando Alonso was stuck behind the Sauber driver who had tyres that were very close to their sell-by and was losing quite a bit of time. Running down from Turn 3 to Turn 4 Alonso simply blasted past him. Jaime Alguersuari yelled, “he let him by”. And you have to think he might have, because it’s a downhill section where the difference in traction isn’t nearly as great as the rest of the circuit. Has the Perez-to-Ferrari deal been done was the immediate thought? Checko was well ahead of Kobayashi who got a poor start and had to fight his way back past Caterhams that weren’t obliged to move over in a hurry.

Williams
Race: Senna
Season: Maldonado 4 – Senna 7
Bruno Senna learned the lesson that if you qualify in the front five rows you’re less likely to have the kind of first lap incident that has blighted so many of his races this year. Maldonado qualified well as we’ve come to expect, and also had a mid-race incident, as we’ve come to expect. His bemusement at being given a penalty for losing control and thumping into the side of another competitor should really be explained to him by Williams driver coach Alex Wurz. Although you’d think the pithy “Don’t hit anybody” would be a good start.

Caterham
Race: Kovalainen
Season: Vitaly Petrov 5 – Heikki Kovalainen 6
Heikki was back on form and back in front of Petrov in front of the biggest Finnish crowd of the season.