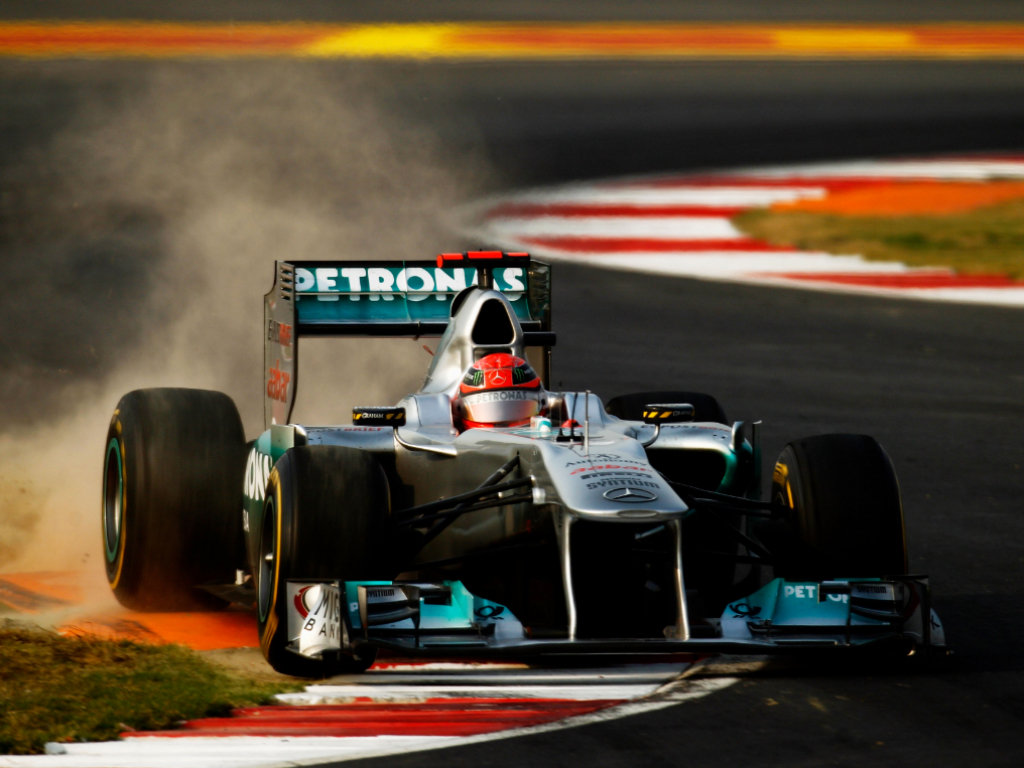 McLaren
Season: Hamilton 7 Button 10
Race: Button
So, that’s it. Jenson’s across the game line as far as TMW is concerned, he can’t be beaten now. However, this season has been as much about Lewis losing it than Jenson winning it. It’s very unlikely that Button would have beaten Hamilton in Delhi had Lewis not encountered the ire of the stewards in Friday practice. It would also be interesting to work out the average grid position across the season for the pair of McLaren drivers because I’d stick a lot of money on Hamilton being in excess of one place ahead.
As we all know Hamilton’s had a lot on his plate this year, a change of management, yes, but more worrying for Lewis than that – he’s been slipping down the Castrol Motorsport Rankings*. What driver wouldn’t lie awake in bed trembling that he’s the wrong side of a NASCAR driver. It’s almost as uncomfortable as learning that Kamui Kobayashi’s borrowed your car for a track day.
In the race Lewis got a poor start and was overtaken by Massa and then went for what would have been a 50/50 overtaking move against Vettel, Alonso, or Webber but was automatically a 30/70 against Felipe Massa. The stewards very bravely asserted that Massa should have given Lewis room – and this may make a valuable precedent going forward. Button tried very hard up at the front but Vettel was his usual brilliant best.

*If you don’t know what these are, it really doesn’t matter. It’s about as interesting as a chart showing your favourite fish of the week.

Red Bull
Season: Webber 2 Vettel 15
Race: Vettel
Seb revealed after the race that he isn’t taking success for granted in a really considered and articulate interview with Lee Mckenzie on the BBC Forum. For those who have the opportunity to watch it, the BBC red button programme after the race is fantastic, better than the build-up sometimes. (They should get the BAFTA for the Indian coverage, both were superb). For a driver not speaking in his native language, the explanations he gives put some of the Brits to shame. And the Irish. Plus he’s funny, too. When told by Lee that he had betaen Nigel Mansell’s most laps led in a season he replied: “I’m surprised there was a record left not held by Michael.”
And then there was the bit about Lee’s phone. Seb: “When I got my first pole, I got about 100 texts. These days I get only four.” So Lee suggested he should give out his number so his fans could text him. Seb smiled: “You’ve got my number, I don’t get any text messages from you. Well, if anybody wants Lee Mckenzie’s number, just let me know.”
He’s as good behind the wheel as he is in front of the camera. In fact such is the level of performance in 2011 that’s its becoming very difficult to judge Mark Webber’s races. Given how easy Seb was finding putting in fastest laps at the end, you wonder what’s going on in the second Red Bull.

Ferrari
Season: Alonso 15 Massa 2
Race: Alonso
Put the contentious issue of Hamilton vs Massa aside, this weekend we had the usual mixed ability group that is the F1 grid – experienced drivers and rookies, and one – Karthikeyan – who’s hardly spent any time in his car this year. None of them broke their suspension on the high kerbs. Felipe Massa managed to do it twice. That says a lot about his mental state right now. Many people are saying that the end to this season can’t come fast enough for Hamilton, but the same can be said for Massa.
Alonso put in another doggedly determined drive and the Maranello boys strategised their way to a podium – the TMW margin says it all.

Mercedes
Season: Schumacher 8 Rosberg 9
Race: Schumacher
Merecedes GP did a passable impersonation of HRT in Friday practice so to come away with a 5th and 6th will be good news for Ross ‘the TD collector’ Brawn. For Michael, 5th from 11th on the grid must rate as one of the best results of his comeback, what’s more he didn’t have to do any of that messy wheel-to-wheel stuff with Nico as he was well clear in the pitstops. Though I’d be interested to hear why Mercedes brought Nico in so early for his hard tyres, unless he had signs of a slow puncture.

Renault
Season: Heidfeld 7 Petrov 9 Senna 1
Race: Petrov
Petrov got close to Q1 but Senna had another lacklustre weekend. The only good news for them is bad news for all of us in that Robert Kubica looks distinctly unlikely to be returning to F1 in a hurry. In the race Petrov held an enormous tank-slapping moment in the fast corners before 10 and 11 which should go down as Save of the Season, and almost crept into the points at the end.

Williams
Season: Barrichello 8 Maldonado 9
Race: Maldonado
Just like Lewis and Felipe, Williams would like to fast forward to the end of the season. It was revealed in Delhi that Maldonado had endured the worst debut season for a Williams driver since Sir Frank entered the sport in 1978. And it hasn’t got any better since. At least next year they’ll have a successful engine unit and most probably a World Champion to boot. Rubens really should enjoy the last two races as much as he can – you can’t help but feel there’ll be tears at Interlagos.

Force India
Season: Sutil 7 Di Resta 10
Race: Sutil
Adrian got it done in qualifying and Paul didn’t, and that was the difference. An enormously important race for Force India. But they may want to upgrade their strategy computer, as that Sinclair Spectrum isn’t getting the job done.

Sauber
Season: Perez 9 Kobayashi 8
Race: Perez
Perez got his hard tyre out of the way after a single lap and then set about the task of overtaking a lot of people on dusty tarmac. No small task. Kobayashi had some more of his often superficial, but inevitable first lap bumps and scrapes, but this time the damage was mores substantial

Toro Rosso
Season: Buemi 7 Alguersuari 10
Race: Alguersuari
Alguersuari had the edge over Buemi but both drivers were celebrating after getting into Q3. Neither had a great start, but gradually hauled themselves back up the order, until Sebastien’s Ferrari engine did a very unusual thing and expired.

Lotus
Season: Trulli 6 Kovalainen 11
Race: Kovalainen
Another strong race for the Lotus team but Karun Chandhok really should have been given the chance to drive Trulli’s car.

Hispania
Season: Liuzzi 10 Karthikeyan/Ricciardo 6
Race: Karthikeyan
For a driver who hardly knows the car, Narain Kathikeyan did extraordinarily well to get close to Daniel Ricciardo’s time in qualifying (even if he did get in the way of the uncomplaining Michael Schumacher).