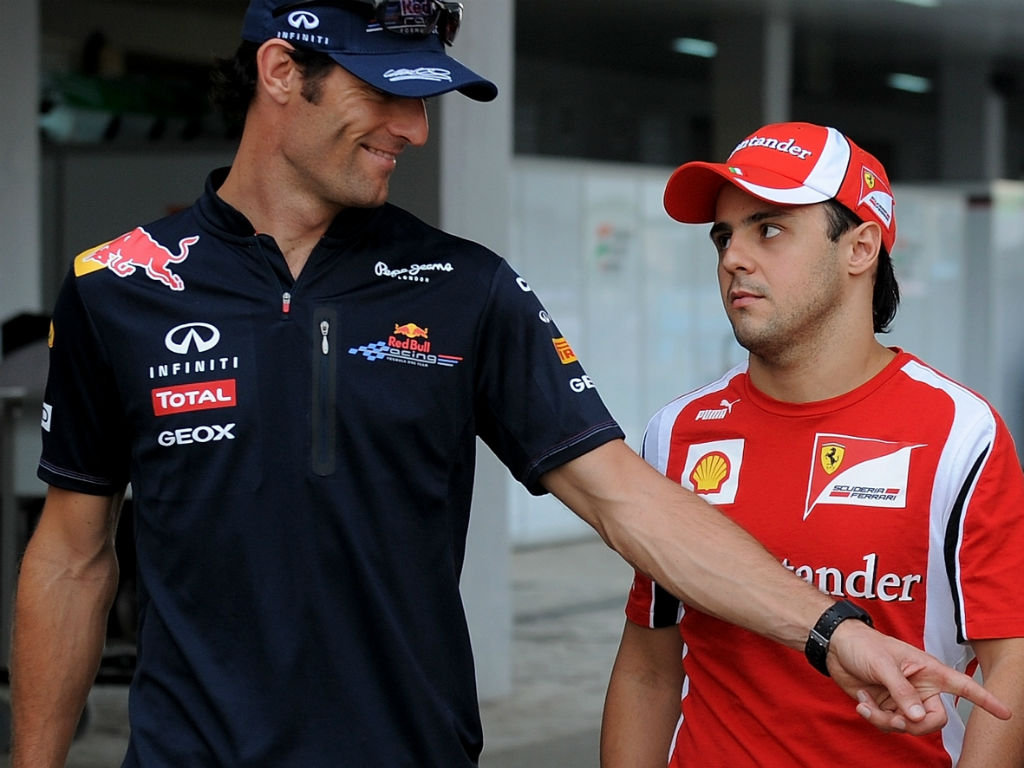 Schumi and Vitaly pulled level, Nico beat Paul and Felipe showed why he likes going against the clock…

Red Bull Racing
Race: Vettel
Season: Sebastian Vettel 16 – Mark Webber 4
First off, it was a fitting finale to a brilliant season of F1 racing. Even if Vettel hadn’t been clogged and sent to the back of the field it would have been a race of high drama. But it so nearly ended in anti-climax and bitter recrimination. Because if Vettel hadn’t rolled his car down the hill at Turn 4 and out of harm’s way then he could easily have been collected by a following car. And he only got into that position – within reach of desperate lungers – thanks to a totally un-coordinated start between the two Red Bull cars that saw them lose places to two Ferraris and a Force India. Mark Webber said before the start that he was going to drive his own race, and if Christian Horner decided to leave it at that, then it was a management mistake. Nobody expects manipulation on the grand scale from Red Bull, but saying to Mark the mildly interfering, “leave the door open into Turn 1” might have given everybody in the Red Bull team an easier afternoon. Vettel drove superbly well and would probably have beaten Webber if the engineers hadn’t had to turn down the engine to stop the broken exhaust from setting the engine cover on fire.

McLaren
Race: Button
Season: Jenson Button 6 – Lewis Hamilton 14
The perfect end to the season for JB, not just outdriving Lewis Hamilton, but beating him in practice and in qualifying being on just about the same time. The ability to keep heat in his tyres and press on when the entire field, bar The Incredible Hulk, had fled to inters was one of the stories of the season. The gap they opened up on the rest of the field was astonishing – they were 18 seconds away from lapping Alonso in fourth place, on Lap 21. Still, despite a Safety Car brought out because there was litter on the track, it all came right at the end. If we had a season of drizzle you could put some very safe money on Jenson.

Mercedes
Race: Schumacher
Season: Michael Schumacher 10 – Nico Rosberg 10
Michael didn’t like the first third of the race but after that he was focused. Rosberg’s puncture ruined his chances of competing, whereas Michael got his obligatory Farewell Brazil Puncture over early in the race and was able to make use of the Safety Car. In the final race in his final season he reached parity with Rosberg, handed the baton of potential Uber Supremacy to his fellow countryman and didn’t block people very much. A nice race.

Ferrari
Race: Massa
Season: Fernando Alonso 17 – Felipe Massa 3
For two races in a row Massa was faster than Alonso and qualified higher than his team-mate. Had that been Webber and Vettel the implication might have been that the pressure was getting to Vettel. Alonso doesn’t get burdened with the same tag. Both the Ferrari starts were electric, but studying Alonso’s lap times and the gaps to the cars in front of him, it was clear that he couldn’t keep up in either wet or dry conditions. Massa choreographed his race with a balletic understanding of what his partner required. In the latter stages Alonso’s only hope was that if the cars in front of him fell off the road, he could then win the race. Two out of three obliged. The closing mathematics of the last 10 or so laps needed a scenario where Jenson Button’s car developed a problem that slowed him but still kept him ahead of 6th place Vettel. Because Red Bull could always be counted on to remove Mark Webber and promote Vettel to 5th. A broken down McLaren would be no good, but a puncture (depending on where he got it) might have been all right. As we all know, it didn’t happen, but stranger things have happened in F1.
There must be something about anti-clockwise circuits that Felipe Massa likes because he was good in Austin, Interlagos and at Yeongam in South Korea – and he was good at Istanbul, when it was on the calendar.

Lotus
Race: Raikkonen
Season: Kimi Raikkonen 17 – Romain Grosjean 3
We’ve all played F1 video games where this has happened. When Kimi Raikkonen started heading off to new undiscovered parts of the Interlagos circuit you wanted his in-car camera to flash up the message WRONG WAY. In truth he knew where he was going – he said he’d been up the support race pitlane in 2001. It shows a very trusting nature to think that the circuit organisers would keep something identical for 11 years (actually not identical, because they locked the gate). In that time they have designed and built Shanghai, Valencia, Singapore, Abu Dhabi, Korea, India and the new Austin tracks. Sergio Perez was still at primary school the last time Raikkonen went through there. Presumably as it’s Interlagos he thought they wouldn’t have bothered to change anything.
Kimi survived in the wet, but didn’t come to the fore as some thought he might, given some outstanding wet drives at Spa and Mount Fuji in the past. Grosjean was his usual excursionary self.

Force India
Race: Hulkenberg
Season: Paul DiResta 9 – Nico Hulkenberg 11
The Hulk loves Interlagos. Ever since he put his Williams on pole (and then got sacked) he’s been itching to get back here and show what he can do. This singular display of virtuosity (leaving aside the small bump he had with Hamilton) was something Paul DiResta hasn’t achieved all season. Paul’s been pretty good all year but missed that stand-out performance enjoyed by Maldonado, Grosjean, Perez and even Kobayashi in Japan. And while these others have often cocked up royally, DiResta had hardly put a wheel wrong. But he was very much in Hulkenberg;s (rain) shadow in Brazil.

Sauber
Race: Perez
Season: Kamui Kobayashi 6 – Sergio Perez 14
Perez was ahead of Kobayashi in qualifying and at the start and was then collected by the woeful Senna. Kamui had a combative race and made good early progress but old habits die hard and there was contact with Webber and Schumacher later on. Sayonara Kamui san.

Williams
Race: Maldonado
Season: Maldonado 10 – Senna 10
Senna’s opening lap lunge down the inside of Paul DiResta and Raikkonen at Turn 4 – that eventually ended up with him hitting Vettel – was something from another formula. Bruno’s made some impressive overtakes this year, but this one was wilder than anything Perez has attempted. In the tumult of the opening laps it was hard to work out what happened to Maldonado, but nothing he could have done approached Senna’s transgression.