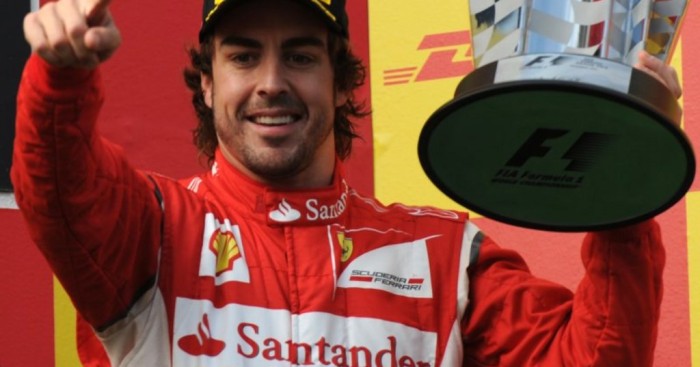 Alonso drew level with Massa while Rosberg, Hamilton and Vettel opened up gaps… and EJ got poetic…

Red Bull
Season: Webber 1 Vettel 3
Race: Vettel
Sebastian Vettel makes it look so easy. This race Mark Webber wasn’t hampered by the wrong strategy choice and he still struggled to beat Fernando Alonso. Vettel was in a race of his own at the front. As Quagmire so accurately observed before qualifying: “You’d think he had long pointy ears under those foam pads” – talking about Seb’s fireproof balaclava inserts and not his Vulcan-like calm under pressure and superior intelligence. God knows what DC’s ears would have looked like with those extra foam pads. Probably a Gremlin.

McLaren
Season: Hamilton 3 Button 1
Race: Hamilton
They were at it again weren’t they. Those McLaren boys. They won’t listen to a word of reason from that nice Mr. Whitmarsh. As it happens, the intra-team duelling is a much easier proposition this year because with tyre wear, tyre stops and the DRS there’s always a chance that they can get the other back. In the past, that would have been the only chance. So in the same way that the DRS has made drivers a lot more careful at the start of the race, so team-mates can get involved in a bit of painless argy bargy.
What is also evident is that with so many tyre changes and strategy permutations, when the drivers get out of their cars and go and complain to the world’s media about their race, they only know half the story. Lewis thought that he might have done five stops and Jenson thought they brought him in too early (when the evidence was quite the contrary). In fact Lewis Hamilton stopped only four times, but the Mclaren pitcrew made them last as long as five…

Ferrari
Season: Alonso 2 Massa 2
Race: Alonso
Fernando’s turn to dominate in the Ferrari team and though he couldn’t get the win that would have meant so much to the Scuderia, at least he saved Stefano Domenicali’s job. Ferrari now look a real proposition. Sometimes in a race you can make mistakes at the right time and largely get away with them (Fernando didn’t do too badly after bashing into Lewis in Malaysia). Felipe Massa made his mistakes at the wrong times in Turkey and it sent him right down the field. Perhaps Stefano won’t be so camera-shy now and come and talk to the BBC after races.

Mercedes
Season: Schumacher 1 Rosberg 3
Race: Rosberg
The race in which the ‘Magic Paddle’ got introduced to F1 terminology. After qualifying over a second slower than his team-mate, Michael Schumacher also needed a cloak of invisibility to hide his blushes. His race pace was good, when he wasn’t trying to administer a Schu-weave on one of the vehicles that was trying to get past. It must be difficult to change habits of a lifetime and the instinctive move to cover the inside is not meant to be vicious, it looks almost like some kind of reflex. Rosberg may not have lived up to his P3 start and P2 opening lap, but he was in the thick of the action and proved that Mercedes are improved from 2010. What will be interesting is when he can get on the front row alongside Vettel and challenge him into the first turn.

Renault
Season: Heidfeld 2 Petrov 2
Race: Heidfeld
Vitaly proved that beneath the veneer of speed and competence there’s a core of raw stupidity, as he bounced his team-mate towards the pitlane entrance. Heidfeld’s a more temperate man than Robert Kubica, Kubica would have gone ballistic if that had been done to him. And rightly so. We know the 2011 Renault doesn’t like being ski-jumped over kerbs, but it must be pretty robust to withstand the sundry knocks it got in Turkey. It would have been good to be a fly on the wall in the team motorhome for that debrief.

Williams
Season: Barrichello 4 Maldonado 0
Race: Barrichello
Rubens faded in a race where he looked on for at least some kind of points finish. He also narrowly lost out on getting the car into Q3, so it’s not all doom and gloom. Perhaps Williams are wishing they had picked up ex-Renault man Bob Bell who was visible in the pitlane for Mercedes this race. Maldonado kept in front of the Lotuses, but racing against Rubens is a tough proposition. The highly rated Nico Hulkenberg found it difficult as well.

Force-India
Season: Sutil 1 Di Resta 3
Race: Sutil
Bar room brawlster Adrian – did you spill my pint – Sutil got the better of Paul Di Resta for the first time this year (Actually for F1 drivers it would be ‘did you spill my half pint of lager top?’. Di Resta was still impressively close.