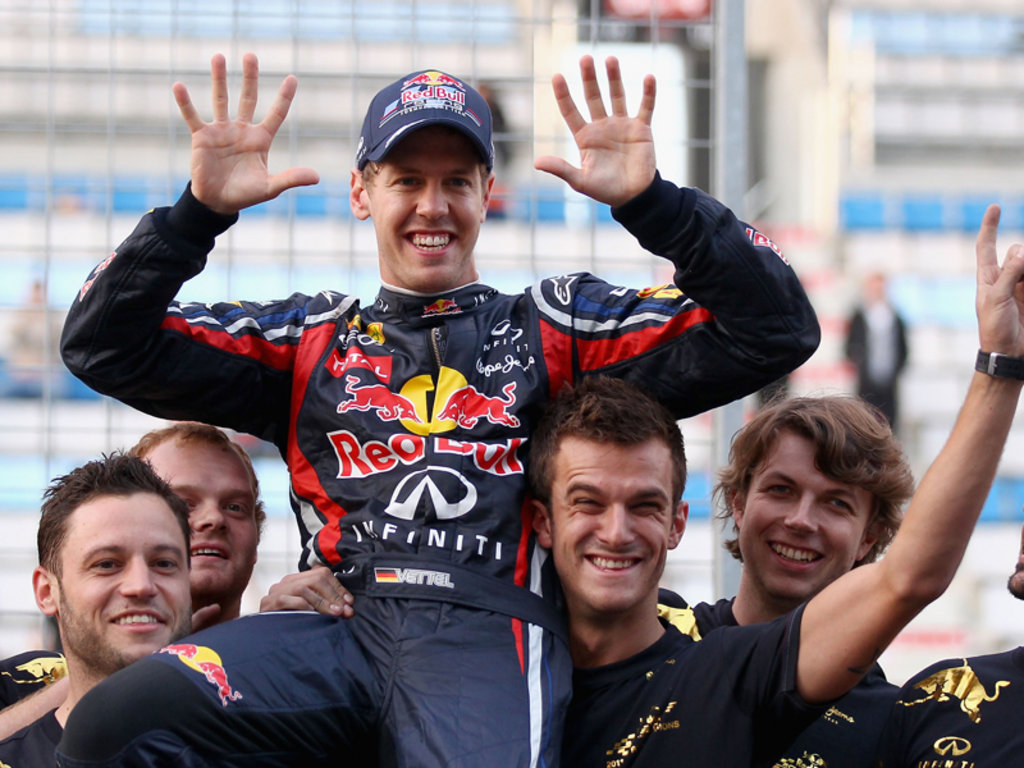 It’s tight at Mercedes, McLaren, Toro Rosso and Force India, but Seb and Fern have collected their TMW prizes…

McLaren
Season: Hamilton 7 Button 9
Race: Hamilton
A shot of redemption for Lewis. His limpet-like adherence to P2 from Lap 28 was an epic performance every bit as good as some of Seb Vettel’s wins this season, if not better. And he didn’t have to do anything dangerous to keep Webber at bay. The side-by-side moves on Lap 34 from Turn 6 to Turn 12 were some of the best of the season. He gave Mark just enough room in Turn 8 and held his line throughout. Jenson Button played his familiar waiting game after being way too cautious on the brakes into Turn 3 and hustled out of positions. However the waiting game lasted all the way to the chequered flag.

Red Bull
Season: Webber 2 Vettel 14
Race: Vettel
Seb managed to do on in four corners what Mark failed to do in 27 laps. Get past Lewis. It was another straightforward win after that. Mark put on his dumpy bridesmaid (with a six o’clock shadow) face in the press conference having been beaten by the wunderkind yet again. When he said he was never going to be World Champion, he meant it. However he shouldn’t beat himself up about it, he’s doing exactly the job that Red Bull want him to do.

Ferrari
Season: Alonso 14 Massa 2
Race: Alonso
Another great qualifying performance from Massa, another electrifying race drive from Alonso. It’s difficult to know what Fernando could have achieved if he’d got past Massa early on in the race. He was good at closing the gaps, but if he couldn’t get past his team-mate then maybe he couldn’t have got past Button, never mind Webber and Hamilton. Massa’s braking at Turn 3 on the opening lap was fantastic. Not only did he judge it to perfection, he was on what Vitaly Petrov would later describe as the “dirty” side. Interviewed in the pitlane before the race Stefano Domenicali was asked why his drivers had taken a couple of runs through the pits before the start. “This is normal” was Domenicali’s casual reply. Maybe Massa was sizing up exactly what he was going to do.

Mercedes
Season: Schumacher 7 Rosberg 9
Race: Rosberg
Nico outqualified Michael who had looked strong in practice. The race wasn’t Rosberg’s best. He was fined for an accident in practice after a collision with Alguersuari by the pitlane entrance. The Yeongam circuit is generally liked by the drivers, but as Martin Brundle said: “If you did a university study to design the worst pit exit to a race track, then this would be it.” After Rosberg’s accident, Nico failed to report to the stewards straightaway and they fined him. In the race he was duelling successfully with the two Ferraris until a massive flatspot brought him in too early for tyres and at the end of the race they looked to have ‘fallen off the cliff’ or he slowed for some mechanical reason. Schumacher’s GP was ended by a rush of blood to the head from his co-nemesis Vitaly Petrov. After the race Michael said; “I was focusing forward to Paris” and I thought ‘why’s he off to Paris?’ Then I realised he’d said: “I was focusing forward to Perez.”

Renault
Season: Heidfeld 7 Petrov 8 Senna 1
Race: Petrov
A solid qualifying performance from Petrov, but a nightmare for Bruno Senna. A disastrous race for Petrov (his second Korean GP blank) and not much better for Senna on a track that was supposed to play to the car’s strengths. Given that Nick Heidfeld is long departed from the team it’s strange to see him still just two points behind Petrov in the drivers’ table.

Williams
Season: Barrichello 8 Maldonado 8
Race: Maldonado
Until Maldonado went the wrong side of the bollard into the pitlane Williams looked on for another precious points finish – a technical failure put an end to that fanciful notion.

Force-India
Season: Sutil 6 Di Resta 10
Race: Di Resta
It was nip and tuck all the way through different phases of the race, but Di Resta won out in the end.

Lotus
Season: Trulli 6 Kovalainen 10
Race: Kovalainen
Another great race for the Lotus team with Kovalainen finishing in front of both Saubers – how good is that. Tony Fernandes was making rumbling noises about the team’s position and (by extension) Mike Gascoyne’s position, but surely such jibber-jabber has been consigned to the dustbin.

Incidentally F1 personnel arriving at the Yeongam circuit were surprised at how little had been done between 2010 and 2011 in developing the track. This included (allegedly) looking into a dustbin and finding the rubbish from last year still there. This week we have heard that Korean GP organisers are desperate to renegotiate their deal which sees them pay a massive