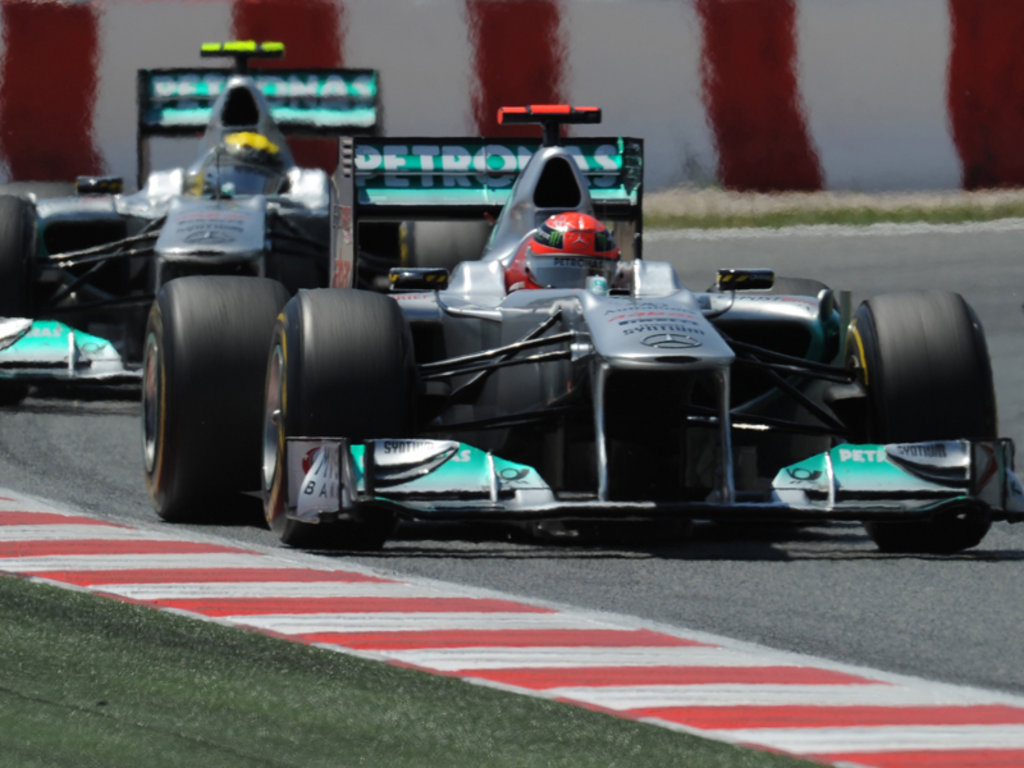 In F1, the first person you have to beat is your team-mate…

Red Bull
Season: Webber 1 Vettel 5
Race: Vettel
We missed out on the grand finale to the race thanks to the red flag and Seb was a lucky lucky boy to hang on. But what a qualifying lap. Even if Lewis hadn’t messed up his own Q3 he wasn’t going to touch Seb’s pole position. Mark Webber got another lousy start and chuntered round for an increasingly familiar fourth place. Seb’s father Norbert was the runner-up in our Star of the Race competition by pushing Eddie Jordan back in the Red Bull pool for the second time, when he was least expecting it. As Seb pointed out smartly, “he got you on the undercut, Eddie”.

McLaren
Season: Hamilton 4 Button 2
Race: Button
Hamilton’s idea that he’s being picked on was given some creedence by Monaco stewards who penalised him for a bash into Massa and a bash into Maldonado when Kobayashi didn’t even get alongside Sutil and was given a reprimand.
It’s quite reasonable that the stewards should penalise drivers who cause an accident by failing to overtake cleanly, but they have to be consistent. And they never are.
In which case the acid test should be this question: Could that move have ever come off? With Hamilton on Massa the answer would be yes, Massa chose to slam the door when he saw a driver coming in what Quagmire likes to refer to as his “mur-errs”.
There’s been a lot of talk in the press about Felipe thinking that Lewis should get another penalty, but I read an Autosport item and it was like they were putting the words in Felipe’s mouth. But Lewis swearing isn’t big or clever and he should leave the poor jokes to Michael Schumacher’s Sekret Tageblog.
Button had a great weekend, qualified well, raced better, but the plot twists were too much for him

Ferrari
Season: Alonso 4 Massa 2
Race: Alonso
Fernando was most likely to win the race had it gone the distance. What a yo-yo between Turkey, Spain and Monaco. He always does well in Canada, too and that’s coming up next.
Felipe qualified too far back, got stuck behind Rosberg for too long and then his chances of threatening the front were gone. Though he must have the rare distinction of being one of the few drivers in the modern era of F1 to make a passing move into Tabac. I don’t remember seeing that happen in the last twenty years. That was the good aspect – driving so close behind Rosberg up the hill toward Beau Rivage that he lost a piece of his front wing (or lopped a bit off the back of Rosberg) was not so good. And he thinks Lewis is crazy…?

Mercedes
Season: Schumacher 3 Rosberg 3
Race: Schumacher
The best qualifying of the year from Michael – P5 looked a million miles away in Q1 when he was one of the first to use up a set of SuperSofts to prevent the embarrassment of going out early. In the end he trumped Rosberg on the grid, quite an achievement. We’ll brush over one of his worst ever Monaco starts and remember the two demon overtakes he made into the Station/Lowes/Fairmount hairpin. The fact that he could do it on both Rosberg and Hamilton was because his team-mate and the McLaren driver were out nice and wide on what is the racing line, not cutting across to the apex en route to a collision

Renault
Season: Heidfeld 4 Petrov 2
Race: Heidfeld
Heidfeld’s lack of qualifying pace is now a concern to Renault, but he makes reliable progress through the field and brings the car home. Unlike Petrov who brings bits of barrier home, as we saw in Monaco. To be fair it was Alguersuari’s accident that he became a part of, but if carbon fibre needs modifying, Vitaly is usually your man.

Williams
Season: Barrichello 4 Maldonado 2
Race: Maldonado
Maldonado looks like he’s getting the hang of this with another great qualifying performance on what is a driver’s circuit. Nobody can call him a pay driver now. He was unlucky to meet up with a determined Lewis Hamilton but there will be other times. Thank heavens Rubens got a 10th.

Force-India
Season: Sutil 2 Di Resta 4
Race: Sutil
DiResta outqualified Sutil yet again, but in the race, his lack of racing laps ended with a clumsy move into the Station hairpin. Schumi got it right with co-operation, Lewis got it wrong with antangonism and Paul got it wrong and then some. Sutil had a fantastic race and his problems only started when he got assaulted by Kobayashi’s Sauber. He struggled to hold back the tide after his wheel got bumped and it was his running off the circuit at the Swimming Pool that led to the RTA behind. But a good day in the office despite a trip to see the stewards.

Sauber
Season: Perez 2 Kobayashi 4
Race: Kobayashi
Technically this ought to go to Perez who qualified ahead of KK. But as Sergio’s accident looked like it had a fair degree of driver input, maybe not this time. There was speculation as to why he was so far off the racing line coming out of the tunnel, to me, he looked like he was expecting a Ferrari or a Mclaren coming through very fastbehind. Kobayashi drove a very strong race in his enforced absence

Toro Rosso
Season: Buemi 4 Alguersuari 2
Race: Buemi
Buemi kept out of trouble whereas Alguersuari seemed like a magnet attracting it. No longer the enfant terrible he’s getting more towards the terrible.

Lotus
Season: Trulli 2 Kovalainen 4
Race: Trulli
Truly, the fightback starts here. Surprisingly this wasn’t as good a race for Lotus as expected, even though we did get some elements of a dodgem derby towards the end.

Boring versus Exciting GPs
Boring 1 Exciting 5
Yet again it was the tyres that rescued what could have been a dull race if overtaking had been left down to just the DRS. With little space to overtake we saw the return of the broken front wings. But we also saw some overtaking moves into Mirabeau, Station Hairpin, Tabac, Nouvelle Chicane, Ste Devote and one incredible move from Lewis in the tunnel. Grazi Pirelli.