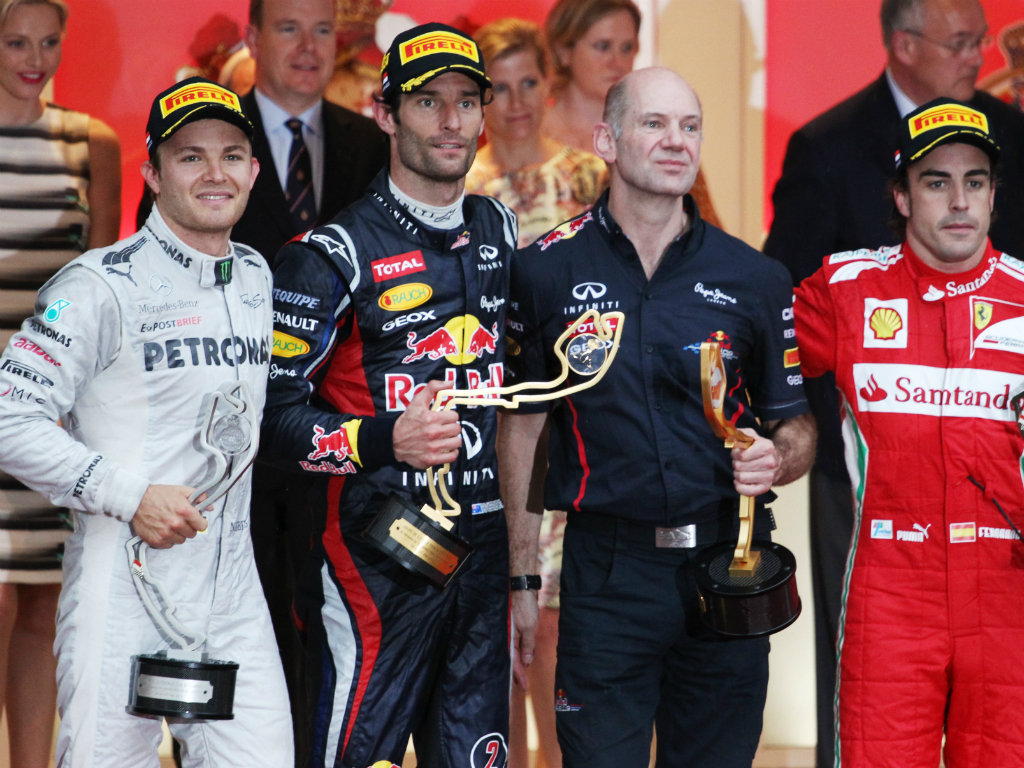 Even a vintage Schumi qualifying performance couldn’t take the TMW points, while Fernando continued the 2012 whitewash…

Red Bull Racing
Race: Webber
Season: Sebastian Vettel 3 – Mark Webber 3
Mark Webber showed what a class act he is around Monaco and what an asset he would be to Ferrari. In a week where Luca Montezemolo has come out and said that Sergio Perez is too inexperienced to become a Ferrari driver, there’s got to be a fair degree of focus on Mark should Felipe’s results fail to pick up. It was his second victory in the tax dodgers’ haven and, as David Coulthard confirmed with him: “No.2s are far more satisfying.” For once Webbo got a blinding start, and even though the run to Ste Devote is short, the RBR’s launch would probably have given him the lead in Barcelona, let alone Monaco. When it got wet and slippery towards the end it was a bit like driving in fog on the motorway. It’s very easy to drive behind the bloke with the rear intensity fog lights on, you just drive to his pace. It’s the guy in front who has to do the vigilance. That was Mark and he didn’t slip up. Though he was helped by the fact that there was so much at stake for those behind. Had Rosberg made a move and it fail to come off, he could have gone from a Monaco podium to sixth place in the blink of an eye.
Vettel was fortunate to get in front of Raikkonen at the start courtesy of a free trip down the escape road. Without it, he’d have been 7th or worse.

McLaren
Race: Hamilton
Season: Jenson Button 2 – Lewis Hamilton 4
Button’s dreadful qualifying is really costing him now. Worse still, that tyre eater of a team-mate is actually looking after his tyres. He is Taz no more. Lewis had a little dig after the last race in Spain about people praising his team-mate for looking after his tyres, and his performance this time round showed a maturity and patience that we’ve never seen before. It’s going to pay off.
Max Mosley always said that F1 should be like a game of chess and the 2012 Monaco GP was F1 at its most chess-like, Mercedes spotted a gap in front of Raikkonen that they could slot into and once he was stopped, everybody had to react. Had McLaren gone for that gap first, then they might have gained a place, not lost several.

Mercedes
Race: Rosberg
Season: Michael Schumacher 2 – Nico Rosberg 4
Vintage Schumi for pole position on Saturday, another bump with Grosjean on Sunday. Michael is right to question the referee on this one. He had his race ruined by Grosjean in Malaysia and he had his race compromised in Monaco too. Grosjean has tangled with Maldonado early on in Australia and with Perez on the opening lap in Spain. That’s four contacts in six races for the very likeable (but wayward) Frenchman.
At least the Mercedes tyres lasted this year. By contrast, the slower qualifying Rosberg held on to P2 shadowing Webber all the way. That could have been a Mercedes 1-3.

Ferrari
Race: Alonso
Season: Fernando Alonso 6 – Felipe Massa 0
Alonso is becoming Alain ‘The Professor’ Prost. Very sensibly he decided he was not going to shag his tyres out by following the gearbox of Lewis Hamilton and slowly dropped backwards during the opening stint. He was most careful in the middle sector, losing no time to Hamilton in the first and last sectors but often 0.5 in the middle sector. Then, as we approached the tyre stop window he suddenly decided to put the hammer down – closed up and ran one lap longer and took the podium place.
You have to wonder then what Felipe Massa was hoping to achieve following so close to Fernando in the opening stages. Was he hoping to exploit a small mistake? Was he trying to apply pressure? It’s a bit of a mystery.

Lotus
Race: Raikkonen
Season: Kimi Raikkonen 5 – Romain Grosjean 1
Lotus were expecting to do much better in Monaco and have now come to the conclusion that they like it hot not cool. Grosjean’s start, as detailed above, was perilous and Charlie Whiting needs a quiet word with him to make sure he calms down his act. It’s surprising that Kimi Raikkonen is so diffident about qualifying behind his team-mate, when bits of it are likely to come flying past at the start.
Raikkonen’s race was limited by his tyre performance and by the fact that Vettel could nip in front of him so easily at the start. Whether rightly or wrongly you got the impression that this was an afternoon of him not trying very hard – the kind that infuriated Ferrari enough to end his contract a year early.

Force India
Race: DiResta
Season: Paul DiResta 5 – Nico Hulkenberg 1
Hulkenberg had the better qualifying, but Di Resta had the better race. This is turning out to be a bit like Sutil vs DiResta from 2011 – Paul is winning narrowly a lot of the time. Two points scoring positions and both in front of the Lotus. Well worth Vijay bringing his cabin cruiser along.

Sauber
Race: Perez
Season: Kamui Kobayashi 3 – Sergio Perez 3
Kobayashi paid the price of reacting too late to Grosjean’s accident. Perez had many adventures during the race and got a lot more experience of the track than he did last year. He set the fastest lap by a mile, but the fact that even he struggled to get past the Marussias is proof that the track needs to be updated to become a GP circuit.

Williams
Race: Senna
Season: Maldonado 2 – Senna 4
Maldonado was keen to help those itching to use ‘From Hero to Zero’ headlines. His deliberate bash with Perez in Free Practice (yes, free practice!) was extraordinary, something you might witness in karting. Here’s what ‘Angry of Hinchley Wood’ said after Spa last year:
Maldonado was a lucky boy to be participating in the race in Spa and, you have to say, in the two GPs to follow. What he did in anger to Lewis Hamilton’s car was extraordinary. Whether you think Lewis is a complete w****** or not, you can’t drive your car into somebody else’s and expect to get away with it. Even Michael Schumacher can’t do that. Look at Eddie Irvine’s accident at the Brazilian GP in 1994. He ultimately got a three-race ban for what could easily have been put down as a racing incident.
Maldonado got the mildest of penalties in the Belgian race in 2011, so clearly he hasn’t learnt. Senna picks up the TMW points for Keeping Calm and Carrying On.

Toro Rosso
Race: Vergne
Season: Daniel Ricciardo 1 – Jean-Eric Vergne 5
Jean-Eric was in with a shout for Bruno Senna’s solitary point in Monaco and wasn’t going to make his tyres last from Lap 17 to Lap 78. Last year Vettel managed something similar but was aided by a Safety car at the end. Vergne’s choice was either something sensible or something radical that might even see him take a 6th or a 7th were the skies to suddenly open (as they did straight after the finish). He gambled and lost, but is edging ahead of