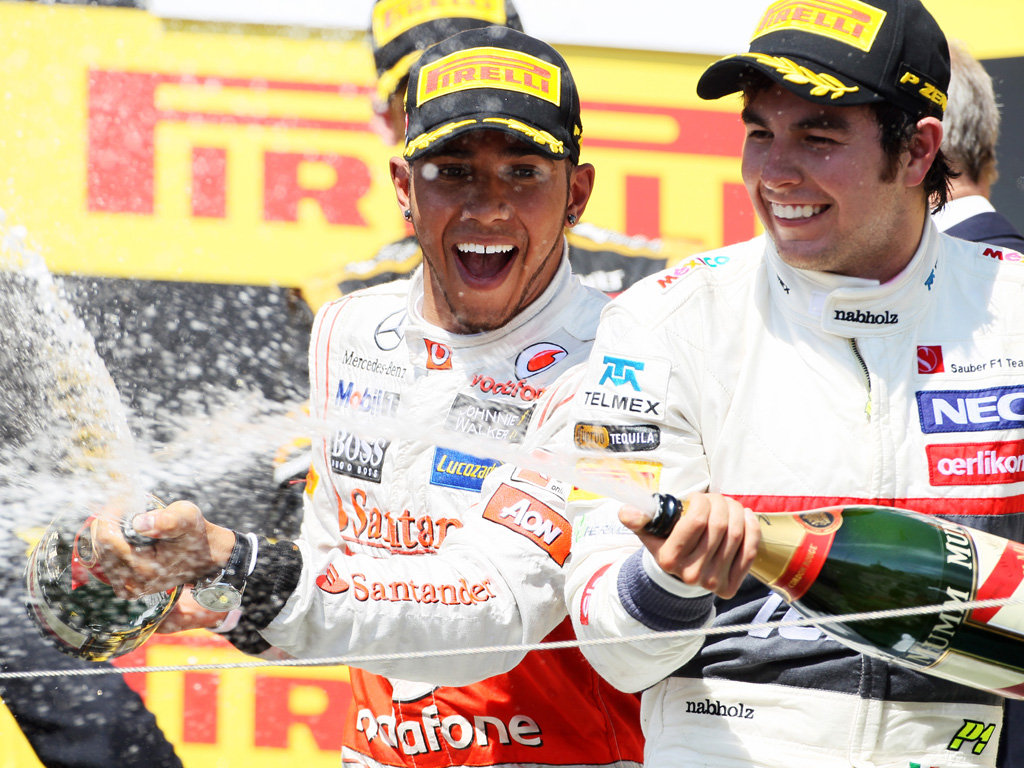 Lewis, Fernando, Paul and Nico are powering ahead while it’s evenly matched at Sauber, Red Bull and Williams…

Red Bull Racing
Race: Vettel
Season: Sebastian Vettel 4 – Mark Webber 3
For a man who’d only finished three places lower than his team-mate Mark Webber looked a bit hacked off after the race in Montreal. Again there was the reference to “the lottery” and it’s clear Mark doesn’t like to drive his car as a tyre preservation exercise. (In fact it’s probably only Perez and Grosjean who like it, but they like everything right now. They haven’t got a drawer full of free Hublot watches from many seasons of podiums, it’s still a novel and exciting experience). Mark was slower than Seb in qualifying, but then again Seb was exceptional in qualifying. In the race the Red Bull struggled for straightline speed and there’s only so much driver input that can be applied in a lap to make the difference if it’s not there. At least the team had the common sense to cut their losses and bring Vettel in at the end. Ha he stayed out he might have finished behind webber.

McLaren
Race: Hamilton
Season: Jenson Button 2 – Lewis Hamilton 5
Last season, Jenson could qualify behind Lewis but make up some of the difference with tyre management. Now, he can’t even do that. The fact that there is no apparent solution to Button’s grip problem must be deeply worrying and if anything’s going to knock time off your lap it’s doubt. It also doesn’t help changing brake compounds mid-season and we saw throughout the Montreal weekend Button locking up. Traditionally he’s gone for the smoother braking of Brembo discs with Lewis preferring Carbon Industries which James Allen has described as “more bitey” but switching for Jenson doesn’t seem to have been a happy marriage.
Hamilton had a great race and in a way reversed the expectations of the 2012 season. So far this year McLaren have qualified well but not lived up to the Saturday form and lost places in the race. In Montreal Vettel was far out in front on Saturday but in race trim McLaren were faster. And we know Lewis hates going backwards.

Mercedes
Race: Rosberg
Season: Michael Schumacher 2 – Nico Rosberg 5
If Button’s disappearing speed was a puzzle, Mercedes lack of front-row threatening pace was a complete mystery. This was supposed to be the weekend that Michael got back on the podium again. Instead, the technical innovation that should have given them the edge – the DRS – gave them a major problem by jamming open and giving Michael his fifth DNF in seven races. Rosberg had demonstrated a clear edge by that time, but from a constructors’ point of view it’s worrying. Because Lotus look more than capable of finishing in the Top 4 relegating them to fifth place constructor in a season they were going to move up and challenge Ferrari, Red Bull and McLaren.

Ferrari
Race: Alonso
Season: Fernando Alonso 7 – Felipe Massa 0
For four laps it looked like Felipe Massa was going to produce a top five result. He’d clambered past Rosberg and was catching Webber in front. Things were looking good. He put in the fastest (purple) final sector on Lap 4 and then…he spun the car and dropped to P12. On a day when he could have been taking points off Fernando’s contenders or giving the team some strategy clues, he was playing catch-up from Lap 6. The slide across tarmac and grass took life out of the tyres and forced him to stop a long way short of Alonso’s pit-stop window so they couldn’t use him as a comparison. Fernando hardly put a wheel wrong but was given the wrong call from the pitwall, after which there was no easy remedy. Shades of Abu Dhabi 2010.

Lotus
Race: Grosjean
Season: Kimi Raikkonen 5 – Romain Grosjean 2
Raikkonen wasn’t happy with the latest version of his steering this weekend and so Grosjean was able to outqualify him and outrace him. Had it not been for early contacts with other cars in previous races the Frenchman would have been a long way ahead of Raikkonen by now. No wonder Kimi’s so grumpy.

Force India
Race: DiResta
Season: Paul DiResta 6 – Nico Hulkenberg 1
More of the same in the Force India battle, hardly anything to choose between the pair of them but Paul comes out on top. It was the Scotsman’s best qualifying performance and looked like it would deliver another good handful of points, except the Force Indias prefer it cool and at 45C the track was more like a Bangalore phal.

Sauber
Race: Perez
Season: Kamui Kobayashi 3 – Sergio Perez 4
Sergio proved he can race and catch a Ferrari and overtake him. His late race laps were a pleasure to watch on the timingscreens, dotted with purple and green (fastest and personal bests) as he realised that a podium was coming his way. There were a lot of Mexican fans cheering Checko on in Montreal

Williams
Race: Maldonado
Season: Maldonado 3 – Senna 4
Maldonado wins the TMW points from Canada by being least worst Williams driver. He and Bruno Senna tested out the magnetic capabilities of that Champions’ Wall and they both found it very attractive. And it could have been so much better for Pastor, too. In qualifying it looked like he’d already done enough to make Q3 when he lost the rear end into it.

Toro Rosso
Race: Ricciardo
Season: Daniel Ricciardo 2 – Jean-Eric Vergne 5
As with Williams, another weekend to forget for both Toro Rosso drivers. Vergne lost time in FP3 due to an off-track excursion, Ricciardo did the same in the race but kept the car going, Vergne got a drive-through for speeding in the pitlane and they both finished back with Jenson Button in the miserable club. Performances that are hardly going to set Dr. Helmut alight with enthusiasm in his quest to find another driver for Webbo’s car should he leave at the end of the year.

Caterham
Race: Kovalainen
Season: Vitaly Petrov 3 – Heikki Kovalainen 4
Heikki beat Vitaly right at the final moment of qualifying and in the race there was just four seconds between them. Hardly much in it at all. But if anybody is going to score a point it looks like it would be Heikki.