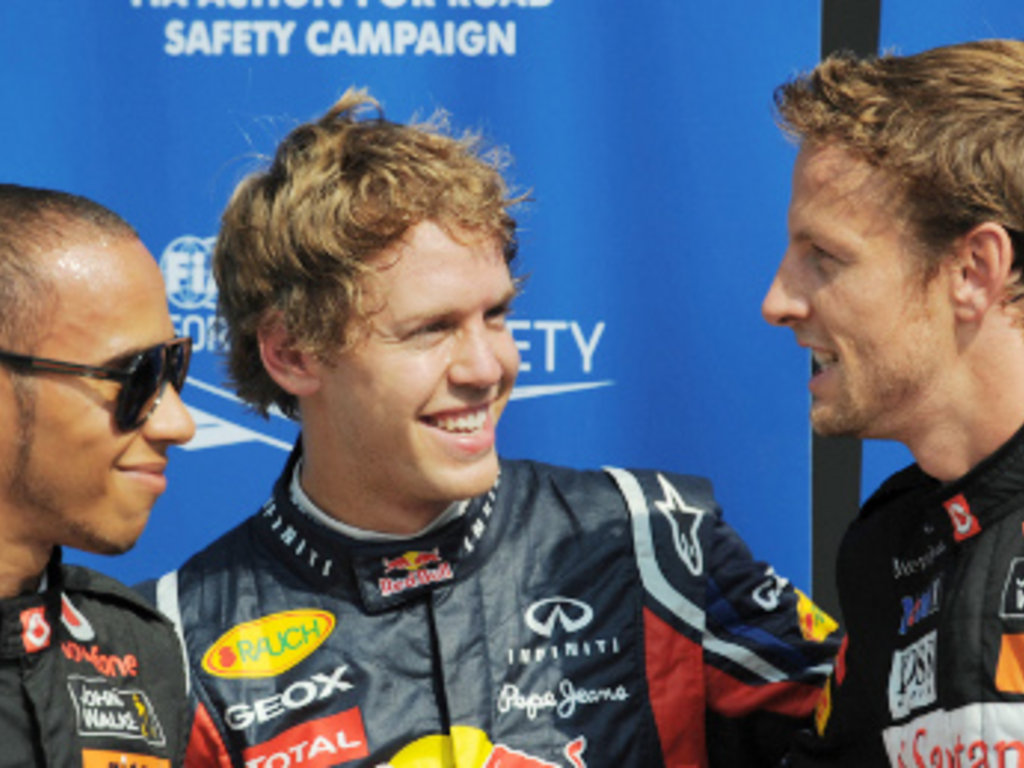 It was many of the usual suspects scoring at Monza – but quite remarkably, Jenson is now in front of Lewis!

It was many of the usual suspects scoring at Monza – but quite remarkably, Jenson is now in front of Lewis!

McLaren
Season: Hamilton 6 Button 7
Race: Button
One of the strangest GPs from a results point of view – Hamilton was by far the fastest driver and would have pushed Vettel hard had he been allowed to catch up with him. On his own, in clear air, he set fastest lap after fastest lap in the closing stages. But he finished behind Jenson Button, off the podium and now slips behind Jenson in the team-mate race… having been faster than him and having outqualified him in two successive races!
It’s a good job this is motor racing and not cycling, because that kind of injustice burns holes in the psyche of professional cyclists. The great Italian cyclist Marco Pantani spent much of his career fuming at the treatment he got from his team, from race organisers and from some of the cycling authorities. And he was one of the few cyclists who could have knocked Lance Armstrong off his perch. But in the end, the politics of it all was too much. Let’s hope that doesn’t happen to Hamilton.

Red Bull
Season: Webber 2 Vettel 11
Race: Vettel
Vettel finally put to bed any doubts that he can’t overtake. Martin Brundle, in the BBC post-race forum, affected an air of “I never realised there was such a big issue about him overtaking anyway”. Clearly a man out of touch with F1 forums. Martin, it all started back at the Australian GP of 2009 when he clattered into Robert Kubica and got a 10-place grid penalty for the following race. There is a strong Kubica lobby on the internet and not such a strong Vettel faction. The mumbling and muttering has been going on ever since. Luvvie, you’re probably been too preoccupied going into Swarovski shops looking for man-jewellery.
Vettel was magnificent in Monza with a drive worthy of a World Champion. If you had to put up with one driver dominating the sport for the next five years, Vettel wouldn’t be such a bad choice; open, honest, funny, supremely talented and to that we can add steely. In the W+L column after the race I commented that although he was smiling at Alonso for the move that put him on the grass down to the Roggia chicane he looked like a man who had taken note. It now turns out that Vettel went to visit the stewards about the move after the race. I’d be interested to know exactly what happened in that meeting.
Mark Webber is another driver who wouldn’t be spoiled by constant success, but after another dreadful start and a poor overtaking move on Massa, you can’t think that it will come with this clutch plate.

Ferrari
Season: Alonso 11 Massa 2
Race: Alonso
A phenomenal start from Alonso at his third home race of the season. It would be good if the BBC could put together all 13 of his starts in a compilation. From above and then from the onboard. It would probably make for the best Ferrari viewing of the season, because after those moments of pure joy, reality kicks in and cars gradually pick him off and knock him off the podium. In Italy, thanks to that ol’ tifosi favourite, it didn’t happen. So you could say that Michael Schumacher has helped Stefano Domenicali keep his job.
Felipe Massa’s luck has got to change soon.

Mercedes
Season: Schumacher 6 Rosberg 7
Race: Schumacher
Nico didn’t get the chance to show how good his gear ratios were, (or his strategy call) thanks to the surprise arrival of an HRT at the first corner. Given that all the drivers who started on mediums decided to shed them straight away, you’ve got to say that his gamble to qualify with them and hence start on them, probably wouldn’t have come off. Michael had yet another electrifying start but tried just a bit too hard to hang onto it. He was lucky to find a Lewis Hamilton determined to be a good boy in Monza and bring his car home. We had some quotes from beleaguered Mercedes personnel in the week, such as Daimler boss Dieter Zetsche, saying it was thrilling racing. Well yes, it was exciting to see how far Michael was prepared to push Lewis onto the grass in a flat-out corner. Had Lewis not moved when he did at Curva Grande then we would have had another Schumacher/Barrichello situation, and who knows what would have happened after that. The cat and mouse stuff was certainly good to watch, but not that.

Renault
Season: Heidfeld 7 Petrov 5 Senna 0
Race: Petrov
Petrov qualified in front of Bruno Senna and through no fault of his own got taken out of the race. So qualifying places apply to the team-mate result. Monza wasn’t much of a test for Bruno Senna; Singapore will be a much steeper learning curve. If he can qualify in front of Petrov there, then that really will begin to ratchet up the pressure for places in 2012. Eric Boullier is saying he really needs to know about Kubica’s ability to drive by the end of October. That sounds like he’s setting the bar extraordinarily high extraordinarily early. If Vijay Mallya is quite happy to wait till December to make his decisions about drivers then something must be forcing Eric’s hand. In terms of car design, Kubica, Petrov and Senna are all relatively tall for GP drivers, so it can’t be that they need to fashion the cockpit a certain way.

Williams
Season: Barrichello 8 Maldonado 5
Race: Maldonado
Maldonado got the bounce on an unlucky Rubens Barrichello who was badly baulked by the opening lap incident.