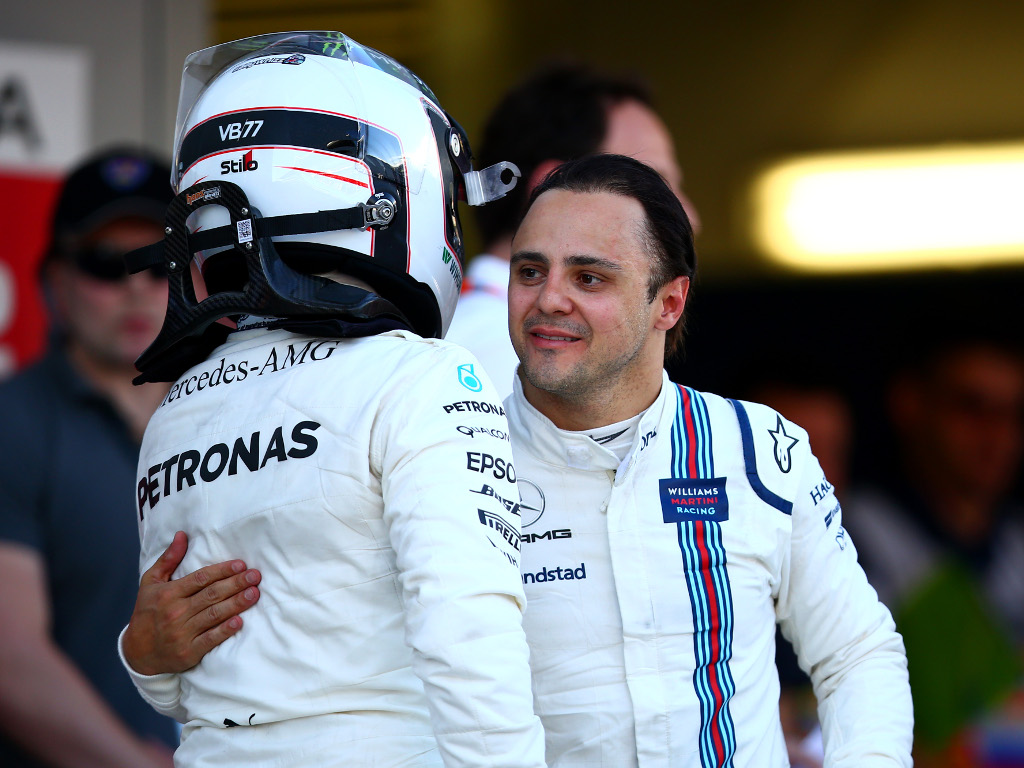 Valtteri Bottas was the star of the Russian GP while Romain Grosjean is the latest recipient of the ‘Pastor Maldonado’ award.

Mercedes
Hamilton 3 – Bottas 1
Race: Bottas
Valtteri Bottas has won his first race to become the fifth winning Finn in F1. But unlike Heikki Kovalainen, who inherited his win at the Hungarian GP in 2008 after Felipe Massa retired with engine failure, Valtteri earned his with an amazing start and some fast laps that kept him out of Sebastian Vettel’s clutches.

How many laps Vettel would have actually needed to pass him at the end is a moot point, the Russian GP was virtually overtaking-free. Bottas had already stamped his authority in the team-mate battle on Saturday, outqualifying Hamilton by a margin rarely achieved by Nico Rosberg. His electric start on Sunday, reminiscent of some of his Williams getaways, rectified his lack of P1, along with a brilliant opening stint that no Ferrari strategy could get the better of.

Lewis admitted that overheating or not, he was only looking at a potential third place.

Ferrari
Vettel 4 – Raikkonen 0
Race: Vettel
Kimi Raikkonen, like Bottas, was in with a good shout for pole on Saturday, but let it slip away in the final sector. He got a very poor start from the dirty side of the grid but was able to out-accelerate Lewis Hamilton and hang on to P3 through Turn 2. No mean feat. And that was it, his afternoon done. Apart from a very funny radio transmission after the pit-stops when he was told by his engineer that Bottas was ten seconds up the road and Kimi yelled back, “how did he get there!” after which he was told that – like in the best pantomimes – Lewis Hamilton was behind him.

Sebastian Vettel had a pretty flawless GP weekend and was generous in his praise for the Mercedes driver who beat him. There was maybe a chink of light at the end of Bottas’s first stint when he put in a 1:40 lap (after consistently posting 1:38s and low 1:39s) and you thought if Mercedes don’t pit now then Ferrari should go for it, but the Scuderia chose not to put the Silver Arrows under pressure by going early, and then Bottas came in.

Red Bull
Max Verstappen 4 – Daniel Ricciardo 0
Race: Verstappen
Unusual to see so many braking issues at Red Bull after Max’s brakes gave up at Sakhir and now Daniel’s caught on fire following behind the Safety Car. The immediate thought was that the team had over-minimized the cooling ducts to reduce drag and reclaim some top speed. (It’s all Renault’s fault whatever happens). But Christian Horner says the team are looking at a component failure.

Daniel got away from the line well having outqualified his team-mate, but Max picked the better line on the opening lap and was harassing Hamilton by Turn 3.

Force India
Sergio Perez 4 – Esteban Ocon 0
Race: Perez
Another impressive double points finish for the pink projectiles. Esteban is closing the performance gap to Sergio, even if he did have a duff start. The 6th and 7th finishes were slightly flattering as Ricciardo retired and Massa got a slow puncture that demanded an extra stop, but they’re both keeping themselves out of trouble.

Williams
Felipe Massa 4 – Lance Stroll 0
Race: Massa
One of the surprising pieces of information we learned before the race was that Lance Stroll only got into the Williams simulator in the week before the race… Clearly he’s no match for Felipe Massa with Felipe putting his car P6 and Stroll P12, but with Lance only .45 away in Q2.

In the race the rookie driver had a spin all of his own making and gave up the chance of a points finish, but the heartening thing was that he finished a GP without being hit by anyone and that can only add to his confidence. Barcelona is next and he knows the circuit, so that will be a good test of his progress.

McLaren
Fernando Alonso 4 – Stoffel Vandoorne 0
Race: Alonso
Despite losing what he estimated as 2.5 seconds on the straights, Fernando Alonso dragged his reluctant McLaren-Honda to 15th on the grid, a massive achievement. His team-mate, to no-one’s great surprise, got through another Honda engine to complete his season’s allocation in just four races. As Fernando might say “impressive”. In F1 the offset of great speed is often a lack of reliability, but Honda have managed to combine both to a level hardly experienced in the dark days of 2015. No wonder there are secret talks going on with Mercedes.

Toro Rosso
Carlos Sainz 3 – Daniil Kvyat 1
Race: Sainz
After his minor aberration in Bahrain, Carlos Sainz was back on form in Sochi, eclipsing local boy (well – give or take a few hundred miles) Daniil Kvyat, despite a grid penalty that put him behind. Kvyat got a poor start and after the race was emeshed in a bit of a slanging match with his engineers. (Never a great thing to do in a team run by Franz Tost) Sainz did a whole lot better, holding off Lance Stroll for tenth place and already looking forward to the race in Barcelona where he’ll have “my own grandstand”.

Haas
Romain Grosjean 1 – Kevin Magnussen 3
Race: Magnussen
Grosjean took himself out of the race thanks to an over-ambitious move on Palmer, while his team-mate was outraged that to avoid making it a two-Haas incident, he jumped the orange line into the run-off area and collected a five-second penalty, as did Stoffel Vandoorne. Although Vandoorne was clearly up for any penalty he could get his hands on this weekend.

Renault
Nico Hulkenberg 4 – Jolyon Palmer 0
Race: Hulkenberg
Yet another mismatch in qualifying between Hulkenberg and Palmer. Although Palmer had limited time in the car, the fact that Hulkenberg could take the same machinery into Q3 while Palmer crashed out in Q1 emphasized the gap in performance. With some team-mate match-ups where the score is 4-0 right now, the margins are very small – Ricciardo and Verstappen, Perez and Ocon, Vettel and Raikkonen. But at Renault it’s more like the Massa/Stroll 4-0.

Hulkenberg scored points, but was disappointed to finish behind the Force Indias. At least he made it past the first three turns, unlike 2015 and 2016.

Sauber
Marcus Ericsson 2 – Antonio Giovinazzi 0
Marcus Ericsson 1 – Pascal Werhlein 1
Race: Ericsson
Honours were fairly even after qualifying, but it was Ericsson who brought his Sauber C36 home in front of his team-mate. Neither could switch the tyres on on Sochi’s super-smooth surface. But at least that was better than Alonso who couldn’t switch his engine on.

Star of the Race: Valtteri Bottas

Overtaking move of the Race:  Not awarded  (Given the length of the start/finish straight, it’s absolutely bizarre to think that there is likely to be more overtaking in Monaco than there was at Sochi)

Great shot from @suttonimages of @RGrosjean taking flight after being punted by Palmer. #F1 pic.twitter.com/aNoxvI8AnR

The Maldonado Award: Romain Grosjean – it is one thing pulling alongside a car and expecting to be given room in a corner, and it’s another thing doing it on the opening lap. Going into the tight Turn 2 Lewis Hamilton was alongside Kimi Raikkonen but he knew they were not going to both get through and dropped behind him.

For some reason Romain Grosjean thought that Jolyon Palmer should make way for him as he squeezed up the inside, even though he admitted not knowing if there was car outside the Renault driver, “I’ll have to look at the video,” he said afterwards. As it happened Palmer could have given him slightly more room, but not enough to avoid contact. This was a reversion to the close-your-eyes-and-hope-Grosjean of Lotus days.