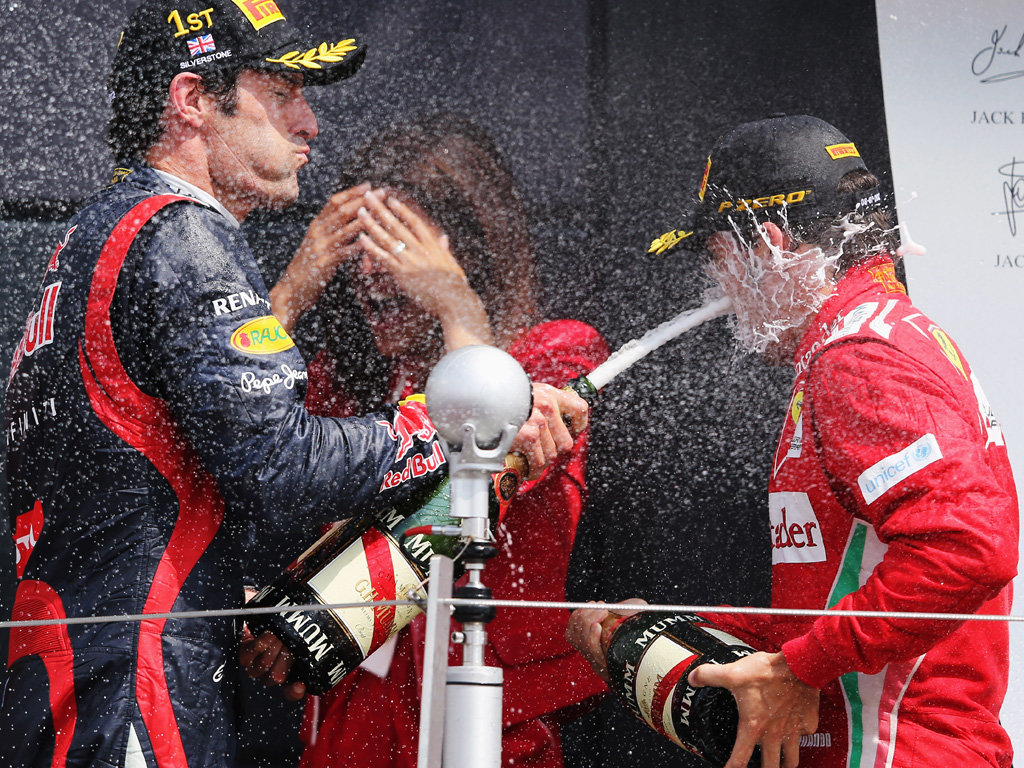 Schumi nicked another one back off Nico, Mark made it almost level at Red Bull. But there’s a lot of 6-3 scorelines out there. Except Ferrari…

Red Bull Racing
Race: Webber
Season: Sebastian Vettel 5 – Mark Webber 4
This was a bit of a stealth victory for Mark, he looked destined for second place for much of the race until the Ferrari in front strapped on the soft tyres. Having dutifully logged time gaps between the leader and P2 for the first 36 laps it was a shock to suddenly see them falling by half a second a lap. This was after the final stops and the endgame was playing out, there was no gap management going on. Webbo did an efficient job catching and passing, with just one lap of wavering. Vettel looked to have no answer to Mark’s pace and put in a few fastest laps but nowhere near as many as the Lotuses. For Webbo, with a new 2013 contract in his pocket and a car he likes much better than last year’s (plus the undying affection shown by Helmut Marko it’s game on at Red Bull.

McLaren
Race: Hamilton
Season: Jenson Button 2 – Lewis Hamilton 7
It’s no surprise that McLaren are having a counsel of war to decide what to do with the MP4-27, they were thoroughly dreadful at Silverstone. Had Kobayashi, Maldonado and Perez continued without incident Jenson and Lewis would have been 14th and 11th. And that’s with the ability of two World Champions behind the wheel. No offence meant, but had they been equipped with the skill set of an average Toro Rosso driver then it would have been even worse. While Ferrari have developed towards the front of the grid, McLaren are taking speed off their car.
At least the pit-stops were fantastic. With impeccable McLaren timing, they’ve finally got that sorted just when it doesn’t matter. Lewis was better than Jenson by some margin and if there’s one consolation for Lewis it’s that Jenson must be close to ruling himself out of the title race now.

Mercedes
Race: Schumacher
Season: Michael Schumacher 4 – Nico Rosberg 5
Another great qualifying performance from Michael, followed by a workmanlike race seeing where his tyres got him. He was a long way further forward than Nico Rosberg who looked like he started the race in third gear, his Mercedes accelerating off the line like a 1400cc A-Class with five rugby players on board…towing a shed.

Ferrari
Race: Alonso
Season: Fernando Alonso 9 – Felipe Massa 0
Felipe’s best race result of the season. Right up until Fernando’s last second escape from Q2 he looked to have got the qualifying edge on his team-mate. It wasn’t to be. But it was good enough to show those at the Scuderia that he can bank points as well. With Mark re-signing for Red Bull, that’s one less pressure point. Fernando has said that he gets the Papal seal on any new team-mate and he wants a friendly, sharing No.2. Who listens out for radio messages.
Alonso was predictably brilliant till the very last stint when he just couldn’t get anything out of the tyres. Apart from chunks.

Lotus
Race: Raikkonen
Season: Kimi Raikkonen 6 – Romain Grosjean 3
Raikkonen didn’t so himself any favours at the start in Valencia and it was more of the same. At the start of the European Grand Prix he’d come up the inside of Maldonado and thought better of it. Very wise too. So at Silverstone it looked like he thought he should be a bit more hustly. He came alongside Vettel, clambering over the kerbs as he did so and planted a Kamui Kiss on Vettel’s Red Bull and then dropped back behind Maldonado. Similarly Grosjean got hung out to dry on the outside and had his front wing re-arranged (not his fault) by Paul Di Resta. He then drove an outstanding race to finish in P6 after an enforced early stop. Both drivers survived adventures and put in the most fastest laps between them. When they qualify well and start well they’ll get a 1-2.

Force India
Race: Hulkenberg
Season: Paul DiResta 6 – Nico Hulkenberg 3
I didn’t get to see Hulkenberg’s exact line into the corner where he pushed DiResta out wide, but it was that movement which sent his team-mate over Grosjean’s front wing and eliminated him. Nico had already won the qualifying battle, the Force Indias supposedly compromising their Saturday pace with a dry set-up. Even so Paul nearly made Q3. In the race Hulkenberg should have accepted that he’d lost P9 to Senna and taken the point for P10, rather than go for an unlikely move into Copse. That would have left Jenson actually pointless not virtually pointless.

Sauber
Race: Perez
Season: Kamui Kobayashi 3 – Sergio Perez 6
Bruised egos and bruised mechanics was the order of the day at Sauber. Maldonado’s shove into Perez was explained by the Venezuelan as the result of cold tyres. The only problem to that explanation being that Perez stopped on exactly the same lap for tyres. ‘Checko’ didn’t hold back when he described Maldonado as dangerous, and more: “Everybody has concerns about him. He has no respect at all.” It’s rare to see F1 drivers express themselves so candidly and you’ve got to give credit to the Sauber team for letting him say what he felt. He was right, too, the FIA should so something about Maldonado but seem incapable of joined up thinking.

Williams
Race: Senna
Season: Maldonado 3 – Senna 6
Another brilliant performance from Maldonado in qualifying, streets ahead of his team-mate. A great start, too, jumping ahead of Raikkonen. And then it all went wrong on Lap 12. Bruno Senna had a quietly efficient afternoon, waiting his moment to overtake Hulkenberg at the end. These two need a skills exchange. Maldonado needs some of Senna’s patience and Senna needs some of Maldonado’s raw speed.

Torro Rosso
Race: Ricciardo
Season: Daniel Ricciardo 4 – Jean-Eric Vergne 5
These two are so evenly matched in races, finishing just two seconds apart, but with Ricciardo having an edge in qualifying. It’s to their advantage that Caterham haven’t found the pace they were expecting from a large raft of updates. That could make Q1 a whole lot more uncomfortable for the Toro Rossos and their potential new neighbours, the McLarens.

Caterham
Race: Kovalainen
Season: Vitaly Petrov 4 – Heikki Kovalainen 5
An embarrassing engine failure for Vitaly on the way to the grid, but he’d already seen off Heikki in qualifying, so he gets the TMW points

Marussia
Race: Glock
Season: Timo Glock 6 – Charles Pic 3
Glock was back to check Pic. Marussia will be happy to have regained their position in front of HRT, though there isn’t a great deal to celebrate at the team right now.