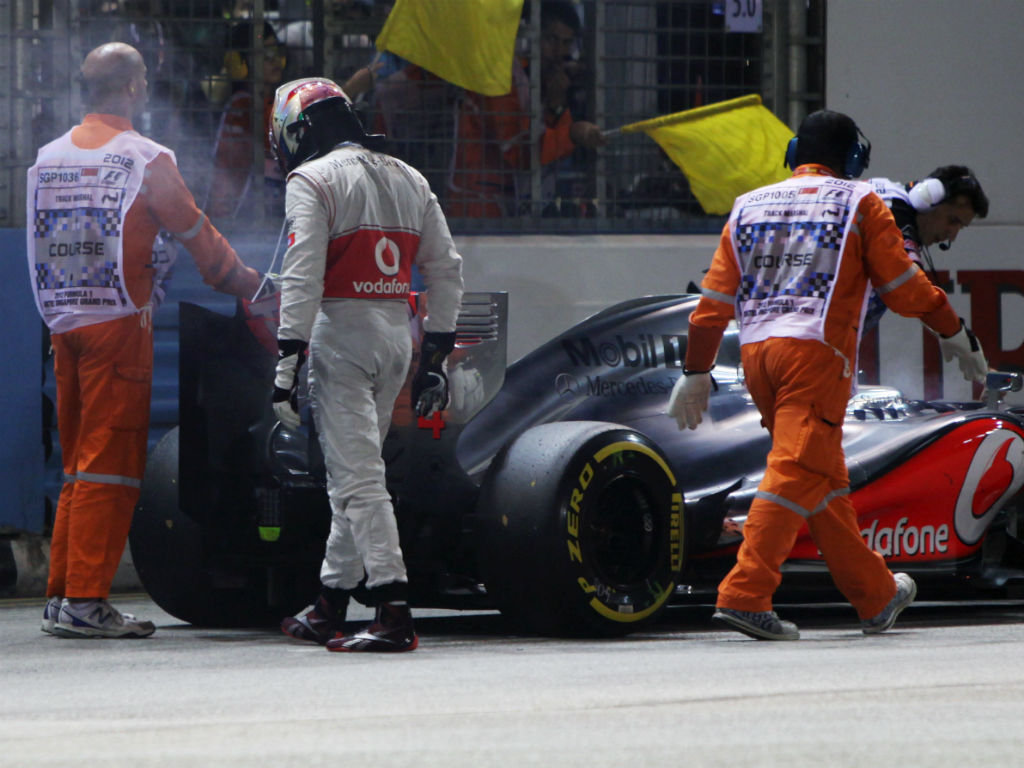 Fernando is still heading for 20-0, while Jean-Eric and Lewis picked points despite walking back to the paddock…

Red Bull Racing
Race: Vettel
Season: Sebastian Vettel 10 – Mark Webber 4
Vettel came up short in qualifying, which was a surprise after leading the way in free practice. It was also a surprise that Mark Webber didn’t do well on a street track when he was King of Monaco. It didn’t help that he had a strategy that cast him into the backmarkers – surely it was worth staying out one more lap…? If they’re going to beat Fernando he’s got to play theteam role now

McLaren
Race: Hamilton
Season: Jenson Button 4 – Lewis Hamilton 10
Lewis Hamilton was super-impressive in qualifying and was driving well within himself when the gearbox gave out. His self-control afterwards was admirable, no tossing the gloves, no wanging the steering wheel, no angry brushing off of the marshals. Disappointing actually. Button took advantage and scored points for the team, but like Webbo, he’s destined for a No.2 role now.

Mercedes
Race: Rosberg
Season: Michael Schumacher 7 – Nico Rosberg 7
With Michael apparently keen to go on racing next season and his future seemingly dependent on whether Lewis gets the hump with McLaren, this race should be a warning. Schumi said he braked early for the corner where he hit Vergne and that he had no retardation from his brakes – yet it just looked like he’d failed to warm his brakes up properly. The stewards agreed and penalised him. If he wants to keep his legend intact then he might think about calling it quits now, all he’s doing is calling his ability into doubt. More than any other season he’s been able to match Nico Rosberg but the mistakes keep on coming

Ferrari
Race: Alonso
Season: Fernando Alonso 14 – Felipe Massa 0
A poor start for Fernando for a change, but it was the right Ferrari that picked up a puncture on the opening lap. Massa made the most of his Safety Car opportunities to haul himself back into contention, including a high-risk squeeze past Bruno Senna. It resulted in a snap spin and catch almost as good as Fernando’s at Silverstone. The team have said they need to develop the car for the last six races, but the last thing they want to do is put a dent in Alonso’s remarkable reliability. He looks incapable of finishing the season with anything but a 20-0 victory.

Lotus
Race: Raikkonen
Season: Kimi Raikkonen 11 – Romain Grosjean 3
Grosjean was on his best behaviour in Singapore and it worked. After Spa we had a lot of people railing about driver standards in F1 these days, but it was a pretty chaotic opening lap in Singapore and the only casualty was Petrov’s wing plus some carbon fibre from a Toro Rosso hitting the queue-jumping Bruno Senna. If F1 drivers take risks they didn’t take 30 years ago it’s because they can. Thirty years ago races could be as boring as being forced to watch BBC London News on a continuous loop. You longed for them to rise to the status of being just mildly tedious. Circuits were narrow, cars were wide and the big question was ‘who was going to break down next’. Show? That was the show.
Kimi was aided into the points by Grosjean’s good manners but the Lotus team look like they’re dropping back.

Force India
Race: Di Resta
Season: Paul Di Resta 8 – Nico Hulkenberg 6
Di Resta’s best result in F1 allied with more bad luck for Nico Hulkenberg. Nico never recovered from poor qualifying where his outlap was compromised by other teams’ hot laps. It’s going to be a real surprise if Di Resta can’t get himself into one of the four top teams in the next two seasons now.

Sauber
Race: Perez
Season: Kamui Kobayashi 4 – Sergio Perez 10
The darling of Monza got hustled out of the way a few times in Marina Bay and his team-mate didn’t fare much better.

Williams
Race: Maldonado
Season: Maldonado 5 – Senna 9
Pastor was brilliant in qualifying and once he’d got his first lap disappointment over was putting in some strong lap times and pulling away from Alonso. It was only going into the second stint that his car began to malfunction and Alonso could put him under pressure. Had he stayed out in front of the Ferrari for much longer then Di Resta’s strategy might have crept the Scot onto the podium. Despite the TMW advantage, Bruno Senna is looking beleaguered. In Singapore he was driving less of a car and more of a high-speed barrier sander.
(So… what about Maldonado to McLaren, then? That would be pretty wild)

Torro Rosso
Race: Vergne
Season: Daniel Ricciardo 7 – Jean-Eric Vergne 7
JEV showed that the small back injury he got in Monza was no limitation over the bumps of Marina Bay. His biggest limitation in the race was having no rear suspension or bodywork after that elderly Mr.Schumacher gave it some mid-season FIA crash testing. Daniel picked up the points but the moral victory was Jean-Eric’s.

Caterham
Race: Kovalainen
Season: Vitaly Petrov 6 – Heikki Kovalainen 8
Heikki and Vitaly’s first lap squabble left Petrov without a front wing and Caterham in a lot of trouble as they are now having serious wheel-to-wheel with the Marussias.

Marussia
Race: Glock
Season: Timo Glock 8- Charles Pic 6
Those two happy-go-lucky Czech puppets Pic and Glock were even happier in Singapore where they scored a dizzying 12th place. Pic wasn’t that far behind Glock, but had already picked up a penalty from Katy Perry’s new found bezzie

HRT
Race: De la Rosa
Season: Narain Karthikeyan 2 – Pedro de la Rosa 11
Having got the taste of outqualifying his team-mate, blow me down, Narain went and did it again. Pedro took race honours, but NK’s hitting peak form as we approach India.

Crawling Up Bernie’s Butt Crack “Loike you would never believe”
Eddie Jordan never fails to disappoint when asked about the utter greatness of Bernie Ecclestone, his very own Dear Leader. The be-wigged one never passes up an opportunity for brown-nosing. And so it was at Singapore.
“Bernie has an incredible vision bringing us here to Singapore.”
and
“I wouldn’t want to be in a big fight with Bernie because he comes out as winner more often than not.”
and
“Well done to the people in Bernie’s office for inviting me (to ask questions on the podium), it was a big