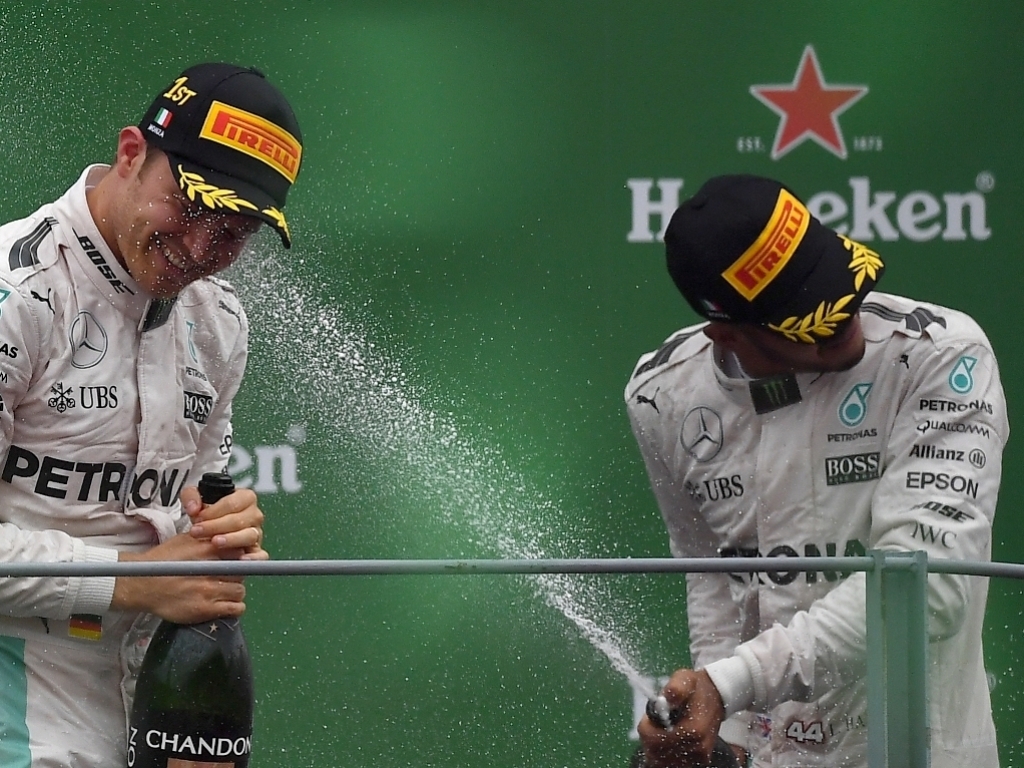 Star of the Race:
Sebastian Vettel

Overtaking Move of the Race:
Lap 54: Max Verstappen on Fernando Alonso at Turn 7

Mercedes
Race: Rosberg
Season: Lewis Hamilton 8 – Nico Rosberg  7
Lewis Hamilton has a problem on his hands. Nico Rosberg is becoming fireproof. In the past he could rely on the odd mistake under pressure from his team-mate, but not anymore. The Singapore GP was the ultimate test of Rosberg’s nerve and he kept it. Although race commentators were wishing an extra lap for the race so that Daniel Ricciardo could have a go at overtaking him, it was more likely that Rosberg had measured out his brake cooling to the most accurate degree.
In fact it was Hamilton who almost threw away a podium place by getting his braking wrong and allowing Raikkonen to make the edgiest of passes.

Ferrari
Race: Raikkonen
Season: Vettel  9 – Raikkonen 6
Tough to judge team-mate performance when one suffers a mechanical fault at the start of qualifying, but the rear suspension failure that Sebastian Vettel suffered on the Saturday could well have been contributed to by Seb hammering his Ferrari over the kerbs.

Raikkonen had a good race but was ultimately let down by a strategy call from the pitwall. Although Rosberg stayed out and lost over two seconds a lap to the Red Bull in the closing stages, Nico’s radio messages to his team indicated that it was the brakes not the tyres holding him back. It’s likely that Raikkonen could have maintained much better pace that the Mercedes in the closing stages, but leisurely hindsight is a wonderful thing.

Had Lewis been delayed by two-tenths on his  undercut lap after his final pit-stop, then the Ferrari call would have been seen as masterful. And then a third place and a fifth place would have seemed a great return from fifth and twenty-second on the grid.

Red Bull
Race: Ricciardo
Season: Ricciardo 7 – Verstappen 4
Dan had the measure of Max in qualifying and pushed hard at the end of the race to get a victory that might have been possible with the 2014 Rosberg, but not the post-Spa  2016 Rosberg. He closed in waiting for a mistake that never happened. The podium interviewer (in this case Jeremy Hardy soundalike Martin Brundle) would have been fearing a Ricciardo win and the prospect of champagne offered from both left and right shoes.

Max’s start was bad, but not Gutierrez-bad, and not all his own work (see below). He made up for it with the usual bunch of inspired overtakes – the one on Alonso crowning it all off. Fernando is the master of keeping people behind him, and Verstappen’s move was as clinical and neat as anything Sharon Osbourne has had done.

Williams
Race: Massa
Season:  Bottas 10 – Massa 5
Williams still haven’t sorted their slow circuit blues and have now fallen behind Force India in the constructors’ championship . As predicted, Massa was better than Bottas on the streets of Singapore, but Valtteri’s early puncture ended any hope of points.

After watching Bottas almost collide with Vettel in the pitlane, it would be interesting to see precisely defined what constitutes an unsafe release these days, but the stewards, aided this time by Mark Blundell, had an unusually solid GP.

McLaren
Race: Alonso
Season: Button 6 – Alonso 8
El Nano is back on it. It’s a pity that Jenson’s car was sidelined with mechanical faults on a weekend where McLaren thought they could get points, but it was almost like in Round 15 Fernando has suddenly put his game face on.

He qualified well, took full advantage of Max Verstappen’s inadvertent delay of the Toro Rossos and ably managed the queue of cars behind him, particularly Kvyat, who was clearly faster but was not up to Fernando’s management of tyres, fuel, brakes and use of boost in appropriate places. It’s performances like this that make you long for the moment when the Spaniard has engine parity with the top three teams.

Force India
Race: Hulkenberg
Season:  Perez 7 – Hulkenberg 8
Hulkenberg showed his class in qualifying, but in the race it was one of those sad cases of becoming an innocent casualty of someone else’s poor getaway. Though it’s always fun to have someone to blame in this instance it was clearly a combination of circumstances.

On a track where tyre management was critical it was rare that Perez couldn’t make more inroads into the points. Indeed it would have been interesting to see what would have happened if the team radio restrictions had been kept in place for this particular GP where tyres, fuel and brakes were given constant advisories for the 61 laps.

Toro Rosso
Race: Sainz
Season: Sainz 9 – Kvyat 2
Finally, a race for the Toro Rossos to get excited about and what happens – a poor start from a team with a similar logo compromises their start. Sainz outqualified Kvyat but from the moments the lights went out the team-mate battle was over as Carlos had enough damage to warrant an orange and black flag (known in the paddock as a Terry’s).

Kvyat looked like a man who had suddenly found a purpose in life again, despite nearing the end of the Red Bull conveyor belt of talent.

Haas
Race: Gutierrez
Season: Gutierrez 5 – Grosjean 10
When F1 lost Pastor Maldonado it lost its unequivocal pantomime figure. “The car delaying me in front/crashing into the back of me/wandering all over the track…” was inevitably Pastor. To a certain extent that role has been taken over by Esteban Gutierrez, who was very good in Singapore. Faster than Grosjean in qualifying and less miserable and French on team radio.
This does nothing for Grosjean’s employability.

Renault
Race: Magnussen
Season:  Palmer 6 – Magnussen 9
Kevin Magnussen got a great start and maintained it. A single point is helpful, but the team aren’t going to catch Haas and they are unlikely to be caught by Sauber and Manor. You wonder what is more valuable to the Enstone team, a gritty drive to 10th place, or not doing $1m worth of damage at Eau Rouge.
On sheer pace Magnussen looks to have the edge over Palmer right now.

Manor
Race: Wehrlein
Season  Wehrlein 1 – Ocon 1
This wasn’t a Manor track. The team’s owner might have felt at home in the nearby financial district, but it was one of those weekends where Manor reverted to their former role as the bookends of the grid.

Sauber
Race: Nasr
Season: Nasr 7 – Ericsson 7
Sebastian Vettel, in his masterful burn from the stern described Nasr as the hardest person to get past. And the Sauber driver can have no finer compliment than that.

Arse of the Race
Romain Grosjean can’t be endearing himself  to the Haas team. “It’s the worst car I have driven for a very long long time.” He complained over team radio on Saturday, a message broadcast to the world. And then he stuck it in the wall.  Alain Prost was sacked from Ferrari in 1991 for describing his Ferrari 643 as: “like driving a truck” (though there was actually only one race to go). Romain must have a pretty robust contract

My Start Went ‘Woof!’
Max Verstappen – although Red Bull were pretty sure it was going to be a sub-optimal getaway after they were prevented from changing an element in Max’s gearbox without incurring a 5-place penalty. As it was, he gave himself a four-place penalty.

Why Engineers Shouldn’t Be Allowed On The Radio II
The noise that Tony Ross emitted  again after Nico Rosberg’s  win was on a par with the noise your science teacher might make at a Taylor Swift concert.