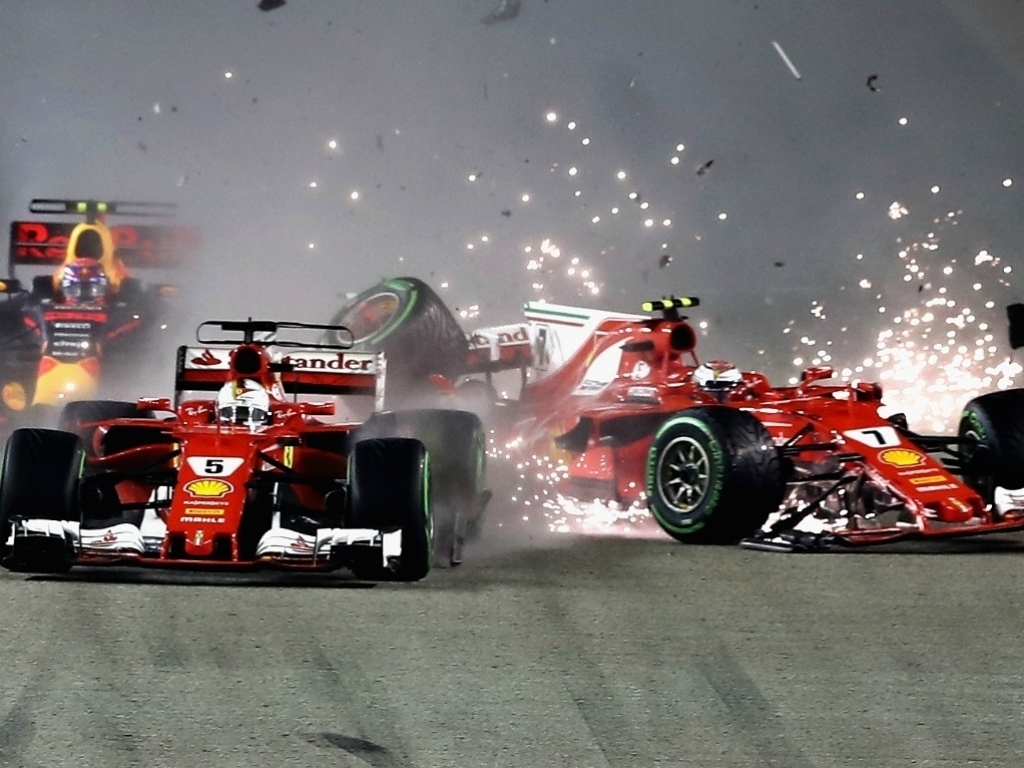 Mercedes
Hamilton 11 – Bottas 3
Race: Hamilton
Lewis said he needed a miracle to salvage a result from this race, but the moment Max Verstappen qualified on the front row, you knew it would take a miracle for Max not to make a lunge for the lead at Turn 1.

More of this later.

Avoiding the carnage, Lewis took control of the race in very difficult conditions and negotiated his way through various re-starts and unnecessary Safety Cars (as opposed to VSCs – when Ericsson nudged the wall and spun there was no huge amount of debris on the track, just a Sauber facing the wrong way, how could they justify a Safety Car for that?)

Bottas may have had his own localised drink bottle problem but yet again this was a clear case of a No.1 Mercedes driver and a No.2

Ferrari
Vettel 7 – Raikkonen 7
Race: Vettel
A lot of people have slung mud at Sebastian Vettel for veering towards Max Verstappen at the start, but first off, let’s not forget he scored a brilliant pole on Saturday when it looked like the Red Bull duo were heading for a 1-2.

So. That start. Vettel is totally entitled to squeeze Verstappen towards the inside of the track, he left him way more than a car’s width before they made contact. Schumi in his day would have gone further, and you suspect had the positions been reversed Max would have gone further to defend his position. It’s a tight turn in. We’ve seen cars run together towards the apex before and the one on the inside misses its braking point and sails on through. (Raikkonen’s gone airborne over the kerbs there before).

What Sebastian Vettel wasn’t expecting was his team-mate trying to grab the lead in a race that was pivotal to his World Championship hopes. I’ve read a few columns that totally absolve Raikkonen for blame in the accident, but it’s a bit more complicated. What was Kimi hoping to achieve by trying to grab the lead in a race which his team-mate had to win? At a start when he knew his team-mate would have his hands full fending off (the wholly innocent) Max Verstappen?

To get that first corner right, without washing out across the track on the exit and taking a penalty, Raikkonen would have needed to pass both Verstappen and Vettel, make sure he was clear of them, move right to take the line into the left-hander and sweep through. That didn’t look possible.

It’s odd that Ferrari hadn’t briefed Raikkonen to steer clear of the likely melee in Turn 1. It’s also odd – as Max has pointed out – that Vettel should risk a big points bonus by going wheel-to-wheel with him when he could have followed behind and outdone him on strategy. Or waited for Max’s inevitable technical problem. But to say that the double retirement is all down to Vettel’s inward movement is wielding too big a stick.

Red Bull
Max Verstappen 10 – Daniel Ricciardo 4
Race: Verstappen
Max was already in front of Daniel when his race came to a premature end thanks to the Ferrari brothers.

It had all looked so good for Red Bull after Friday and Saturday practise and the possibility of banishing those season-long reliability issues with a 1-2, a 1-3, or even a 2-3 finish must have crossed Christian Horner’s mind before the start of Q3. Alas it all ended in a DNF-2, thanks to Daniel’s fragile gearbox that meant as soon as the Safety Car had closed the field up he couldn’t risk challenging Lewis Hamilton.

Force India
Sergio Perez 8 – Esteban Ocon 6
Race: Perez
Sergio Perez put in a far more mature drive at Marina Bay, outqualifying Esteban Ocon by half a second and making the most of the wet conditions to come home 5th. Ocon wasn’t as confident in the mixed conditions and will need to work on it if he’s aiming for a top team.

Williams
Felipe Massa/Di Resta 11 – Lance Stroll 3
Race: Stroll
Given Lance Stroll’s starting position of 18th, to bring the car home and avoid heavy impact with the barriers in the first wet Singapore GP was pretty good in itself, but to come 8th in front of your vastly more experienced team-mate is a result verging on the Baku.

He benefitted from starting on Inters and maybe shouldn’t have let Vandorne past but that’s a small price to pay for bringing the car back to the paddock much as it started.

At the start his team-mate showed why such luminaries as Nigel Roebuck think he is the best driver of the 21st century. Lewis may have the odd off-weekend when he doesn’t show up, but Fernando is always dialled in. His start was one of the best of the year, reminiscent of Senna at Donington all those years ago at a wet European GP.

Toro Rosso
Carlos Sainz 10 – Daniil Kvyat 4
Race: Sainz
It’s never good when your team-mate comes 4th and you stuff your own car into the wall. However Daniil Kvyat will be heartened by the fact that his almost-as-good-as-Verstappen team-mate is now heading off to another team and Torro Rosso would be chancing it to promote two rookies for 2018.
Carlos Sainz obviously benefitted from the first lap carnage, but excelled in the damp conditions. Sainz vs Kvyat is a battle already won, but Sainz vs Hulkenberg next year will be a gripping contest.

Haas
Romain Grosjean 7 – Kevin Magnussen 7
Race: Grosjean
Grosjean had the advantage of starting on inters, unlike his team-mate who was on wets, which proved to be the slower tyre in the first stint.

Kevin Magnussen shook the dice to win back an advantage and was the first to gamble with slicks. It was the right move, but it didn’t pay out and he had to let Le Whinge through before his MGU packed up for the day.

Renault
Nico Hulkenberg 13 – Jolyon Palmer 1
Race: Hulkenberg
The Hulk qualified as best of the rest and even though Jolyon put in a late, spirited charge to get on terms with his team-mate, he was never a match. We know that Nico is peerless in mixed conditions and he was on for a good result, even potentially challenging Bottas, when an oil leak forced him into a DNF.

Palmer’s drive gave us a glimpse of his GP2 form and sixth may indeed be the high water mark of his F1 career.

Star of the Race: Lewis Hamilton
Overtaking Move of the Race: Lap 5: Jolyon Palmer on Valtteri Bottas making the most of his full wets into Turn 1
The Maldonado Award: Kimi Raikkonen
The Last Word: Sebastian Vettel in Q3: “I touched the wall badly after Turn 19 but I had to go for it!”