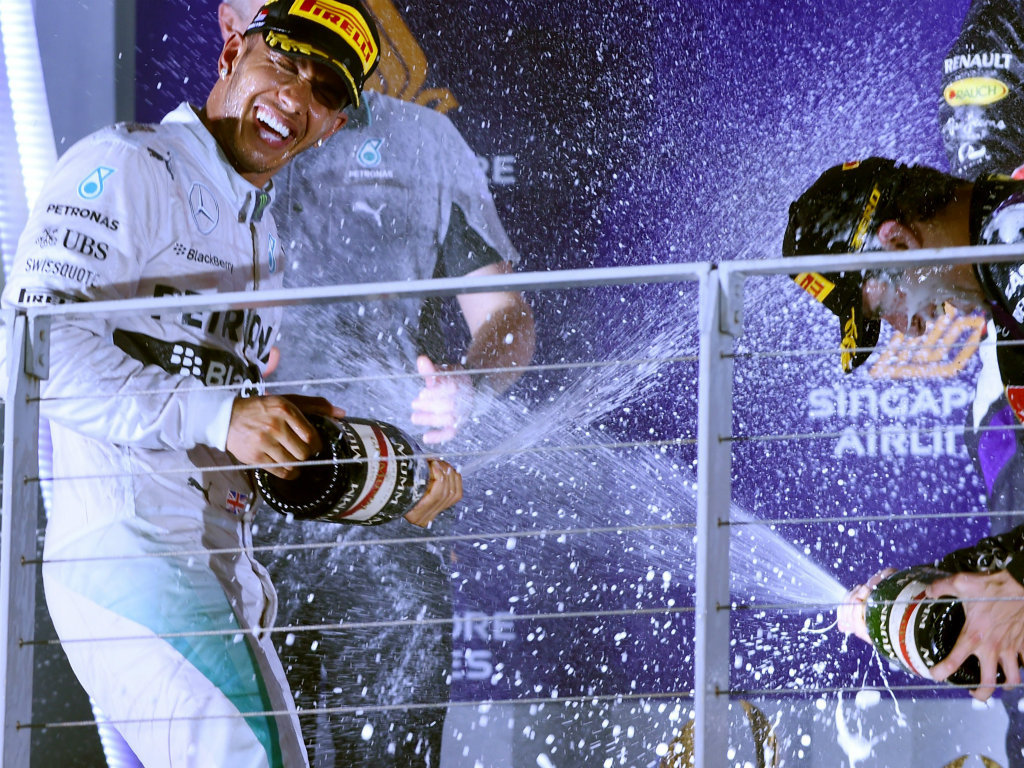 In F1, the first person you have to beat (without any coaching) is your team-mate.
Mercedes
Nico Rosberg 3 – Lewis Hamilton 11
Race: Hamilton
Lewis Hamilton clung onto pole despite an early lap error. In the race, from the moment Nico Rosberg’s wiring loom gave up the ghost, Lewis had 25 points to lose. His late-race charge was impressive, and although he seemed calm on team radio, the fact he passed a severely-struggling-with-tyres Sebastian Vettel in such a nadgey place, when he had laps and better opportunities to spare, shows that the pressure was getting to him. Presumably it was the fear of a Safety Car. Because if it can take seven laps – yes, seven laps – to clear up the debris from a broken Force India front wing and get the field back together, then it could have been close. Lewis passed Seb on Lap 54 and we only ran to 60 laps.
Nico Rosberg, for his part, showed the face of a true sportsman, not kicking his toys out of the pram when the dashboard read Game Over.
Red Bull
Daniel Ricciardo 11 – Sebastian Vettel 3
Race: Vettel
Dan struggled in the race with a battery that wanted constant attention if it was going to take any charge, but Seb had already bested him away from the line – aided, it has to be said, by a big gap in front. The fact that Dan could outqualify Seb on a track where Seb has won for the last three years tells you all you need to know about the relationship, the four-time World Champion is not pegging him back. And great to hear the Aussie roar.
Ferrari
Fernando Alonso 12 – Kimi Raikkonen 2
Race: Alonso
Alonso’s strategy gamble so nearly paid off, but he’d already proved that the Scuderia could still contend for podiums after their CEO-losing performance of Monza. Kimi Raikkonen also looked a lot racier than his result suggested. With recurring doubts over Alonso’s future at the team it’s important that Kimi sticks around.
McLaren
Jenson Button 11 – Kevin Magnussen 3
Race: Button
With driver coaching now verboten, it’s probably swung the balance back towards Jenson Button being retained. Because now the FIA are putting the emphasis back on driver expertise, rather than team expertise. In the race Button got a brilliant start and should have been sixth after the opening lap, except a lunge from his team-mate slowed him down and let Massa slip past (sometimes known as “Marsa” – see below). Button’s machinery quit on him, but Kevin battled through heroically to the end in severe pain. In the coming races we’ll s Kevin Magnussen 3ee
Williams
Valtteri Bottas 7 – Felipe Massa 7
Race: Massa
Felipe Massa qualified better than Bottas and kept his tyres together better than his more-podiumed team-mate. However in terms of team-mates who are evenly matched, they are probably the closest of anyone on the grid, which the TMW score endorses.
Toro Rosso
Jean-Eric Vergne 6 – Daniil Kvyat 8
Race: Kvyat
Vergne had an astonishingly good race despite qualifying behind his rookie team-mate. This was a good race for Kvyat to experience, to see what kind of things can go wrong and how to react to them. Vergne produced the goods in terms of overtaking cars at the end, and what’s more, with all the other drivers now knowing that his racing career is on the line, the next time he comes up the inside, they’ll know he’s not going to back off.
Force India
Nico Hulkenberg 8 – Sergio Perez 6
Race: Perez
After qualifying 13th and 15th Force India looked like they might be scrabbling around for a point or two. Especially when we got the unlikely scenario of Romain Grosjean in a Lotus attacking Checo around half-distance. But the strategy all came good in the end and some elbows-out passing from Sergio transformed the leader board in the closing laps after Bottas’ and Button’s demise. And now Force India are in front of McLaren, when for about 55 laps they looked like taking a hit.
Lotus
Romain Grosjean 8 – Pastor Maldonado 6
Race: Maldonado
Lotus threatened the points positions again which is a more than welcome sight. Although there are many complaints aimed at the Renault engine – that same engine finished in P2 and P3.
Sauber
Esteban Gutierrez 6 – Adrian Sutil 8
Race: Gutierrez
Sometimes the could-be-carnage races are the ones to stick around for to pick up some unlikely points, so not good to have two retirements.
Caterham
Marcus Ericsson 1 – Kamui Kobayashi 12 – Andre Lotterer 1
Race: Kobayashi
Marcus Ericsson managed to keep the Marussias behind, but Kobayashi had already firmly beaten him in Qualifying.
Marussia
Max Chilton 4 – Jules Bianchi 10
Race: Bianchi
Considering he’s won at Singapore, it was surprising that Maxy boy didn’t do better.
Star of the race
Lewis Hamilton 6, Daniel Ricciardo 4, Sergio Perez 2, Jules Bianchi 1, Valtteri Bottas 1
Overtaking Move of the Race
Lewis Hamilton 4, Daniel Ricciardo 3, Valtteri Bottas 2, Kamui Kobayashi 1, Sebastian Vettel 1, Nico Hulkenberg 1, Fernando Alonso 1, Jean-Eric Vergne 1
Sat on the Naughty Step
Pastor Maldonado 3, Kevin Magnussen 3, Max Chilton 2, Christian Horner 1, Ecclestone 1 (for suggesting it would be no problem to lose cars off the grid), Kimi Raikkonen 1, Charlie Whiting 1 (safety issues in Germany), Perez 1 (the totting up system), Nico Rosberg 1 (Proving-a-point-gate),
Media Watch
BBC Radio 5 had Marussia reserve driver Alex Rossi sitting in on the commentary on Sunday. Alex was probably a bit too chilled for the frenetic pace of an F1 race, but the best bit was when he renamed the Williams drivers. Most people call them “Bottas” and “Massa” – Alex liked to call them “Marsa” and “Boat-arse”.
Former Toro Rosso Head of Communications, Eric Silbermann: “It’s ironic when this season started Luca Montezemolo was taling about ‘taxi drivers’ driving round saving fuel, the only person leaving in a taxi is Luca Montezemolo.”
Eddie Jordan: “Nico Rosberg plays it sensible. That adds to the juice of the excitement.”
Former Toro Rosso Head of Communications, Eric Silbermann: “And Alonso just popped in the fastest race of the lap…”
Andrew Davies