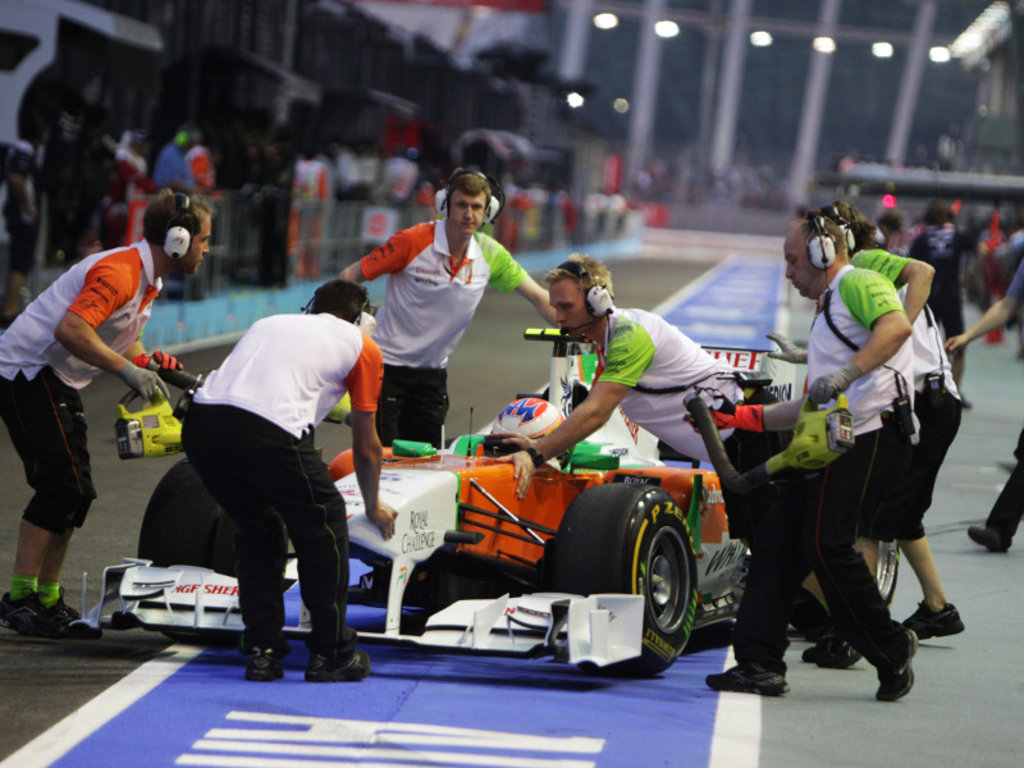 A great race for rookies – Di Resta, Perez, Senna and Ricciardo all came out on top. But not D’Ambrosio. No surprise there…

McLaren
Season: Hamilton 6 Button 8
Race: Button
The old Taz was back at work in Singapore. Wind him up, let him go, stand back and watch the results. Felipe Massa was annoyed by Lewis’s actions in qualifying, but that was sheer exuberance. Hamilton was having fun. If Massa feels the need to block into two corners getting towards the end of a lap where he’s already running turbulently close to a guy he is not allowed to overtake (Fernando Alonso) then he’s in trouble. Button was doing a lot more calculated winding up than Lewis, slowing the outlap down so that Ferraris couldn’t get heat into their tyres and it worked. When Massa says there is something wrong with Lewis’s mind, he is quite correct. But he’s always been like that. That’s why he’s so watchable. Nobody’s going to go to Lewis Hamilton for his views on Geopolitics or his Ali G impersonations, we watch him because things happen in the motor car he’s driving – and we’re rarely disappointed. However in the race what he did was a mistake, he just got too close to Massa and lost a front wing. And he paid the price and didn’t moan about it.

Up front, Jenson Button had a storming race and at the end his triathlon training really showed in that he could push the car right up until the flag. Vettel didn’t have so much left but it would have been interesting to have another couple of laps.

Red Bull
Season: Webber 2 Vettel 12
Race: Vettel
Vettel’s so good these days that you really want to see what he could do given a Mercedes or a Lotus. You just want to know HOW good. The Singapore GP was another on his Collectors’ List of races. This is his first win at Marina Bay but you can already fast-forward 10-15 years to when Martin Brundle will be saying “six times Singapore GP winner Sebastian Vettel” and David Coulthard will still be saying “Ve-ttel”. Sebastian’s most worrying moment came at the start. It’s no bad thing for Red Bull that it’s such a short one at Marina Bay because he kept clear of Button and then disappeared.

Team-mate Mark Webber also had a strong race after his much-predicted bad start, putting in two great overtaking moves on Fernando Alonso and picking up another OMR. The BBC really ought to get Button and Webber together to trade off overtaking moves of the season. This is one competition that will go down to the wire.

Ferrari
Season: Alonso 12 Massa 2
Race: Alonso
Not a ballistic start from Alonso but a good one and a fine race, making few mistakes and maintaining a healthy gap to Lewis Hamilton in the closing laps. Felipe Massa had his usual dose of 2011 misfortune coupled with added Singapore misfortune. Felipe doesn’t recover well from setbacks and if he could maintain that seething level of anger right up to the driver interviews after the race, ( a long, hard, energy sapping race) then he was obviously enraged through the race. Not just red mist, red blanket fog. That might explain why he completely cocked up his exit from a corner to allow Hamilton to overtake him so easily as Lewis climbed back up through the field and Massa festered.

Mercedes
Season: Schumacher 6 Rosberg 8
Race: Rosberg
Nico outqualified Michael but not by much and lost out to an ‘interesting’ call from Race Control. It’s one thing skipping the chicane in Canada at the end of the lap, it’s quite another skipping over a chicane to keep your momentum when you’ve gone in too fast to Turn 1 – and there are 15 cars waiting to take advantage. Had Rosberg been forced to take the tarmac line then he would have been at least behind Schumacher and maybe the Force Indias.

Drivers are warned about using the run-off at La Source at Spa, why doesn’t that apply to Singapore in the same way? True, Nico got a slight touch from Massa going into the corner but it didn’t look much.

Michael was doggedly pursuing Perez but fell foul of him lifting early at Turn 8. Hmmm, a Sauber lifting early and someone running into the back of him…that sounds familiar. What was touching about the whole incident was David Coulthard’s genuine concern when he saw the Mercedes airborne and rammed into the barrier. They may have been adversaries once…

Renault
Season: Heidfeld 7 Petrov 6 Senna 1
Race: Senna
Senna outqualified Petrov at a tough technical circuit. Nick who?
In a way it was quite odd to see the Renaults so far back down the field, such has been their success this season that they looked out of position. They knew it was not going to be a good GP for them and they were right.


Williams
Season: Barrichello 8 Maldonado 6
Race: Maldonado
Rubens should have been streets ahead of Pastor at a track he knows from real life and Maldonado only knows from the simulator. Perhaps it’s the knowledge that with Kimi Raikkonen expressing a desire to get back into F1 he knows his time is up. Raikkonen, let’s not forget, managed to pocket a double digit million dollars from Ferrari, for vacating his seat to allow Fernando Alonso early access to a Maranello staff car. For Williams, drivers with cash are a lot more interesting than drivers with sponsors who say they’ve got cash.

Force-India
Season: Sutil 5 Di Resta 9
Race: Di Resta
If it could be an honourable draw then it would be 0.5 each, but we don’t go in for that namby pamby liberal s***e like they have in English primary schools where it’s all about participation and there are no winners on sports day. Di Resta was outqualified by Sutil who let him through. But seeing as Paul was behind Adrian on the grid, on a different strategy, he probably got the strategy Force India thought was less likely to succeed. So Paul gets the big shiny badge and a Curly Wurly.

Sauber
Season: Perez 7 Kobayashi 7
Race: Perez
Michael and Kamui got together in the race and it was just like old times. It didn’t last, though, they were just strangers in the night. Michael was en route for a rendezvous with Sergio Perez’s rear tyre. Being the consummate professional I’d be interested to know if Michael went and had a quiet word with our Sergio afterwards. He knows Peter Sauber of old, so a quiet little word could be arranged out of sight of the media. Schumi wouldn’t do it for grandstanding purposes, just to put him right. There was something about the way he phrased his surprise at Perez lifting early that hinted at it.

Toro Rosso
Season: Buemi 6 Alguersuari 8
Race: Buemi
Buemi was a lot neater and quicker around Marina Bay and didn’t bend his vehicle around a barrier.