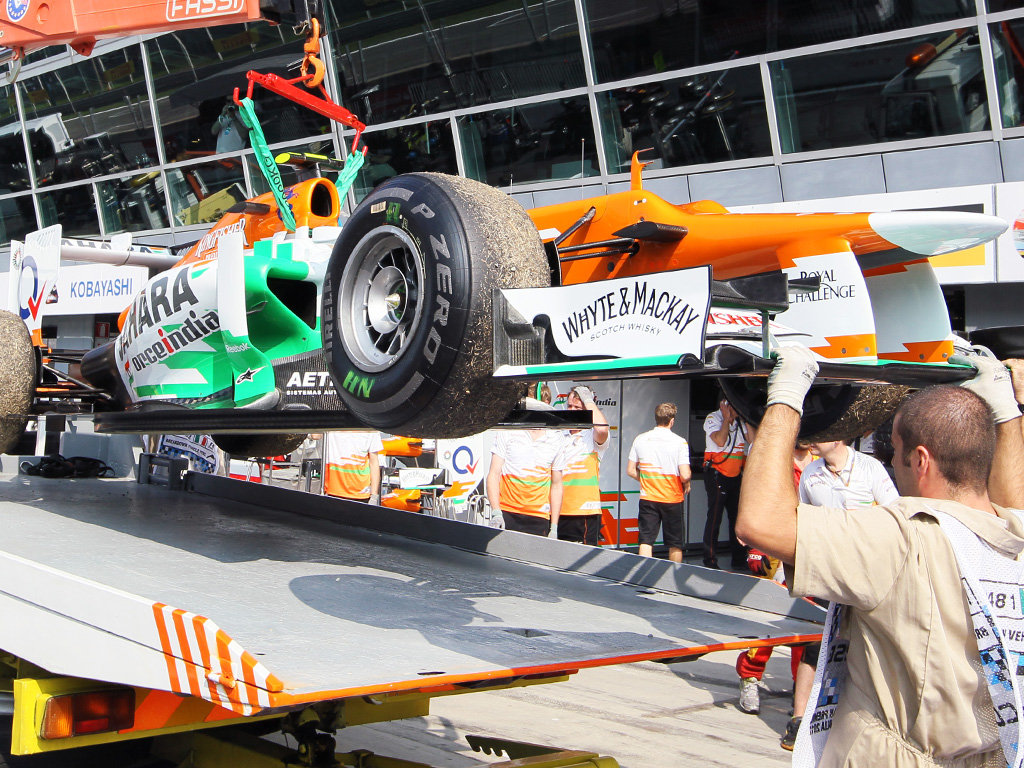 Because in F1 the first person you have to beat is your team-mate.

Red Bull Racing
Race: Vettel
Season: Sebastian Vettel 11 – Mark Webber 4
Seb looked pretty much unbeatable in Japan, though Webbo got to within 0.25 of his qualifying time. There’s something about the Japanese GP and Mark getting struck by “bloody kids”. Before they became team-mates Vettel hit him up the rear behind the Safety Car at Mount Fuji and now he gets creamed into by Roamin’ Grosjean – the grim reaper of World Championship points.

McLaren
Race: Button
Season: Jenson Button 5 – Lewis Hamilton 10
Lewis Hamilton knew he’d made a mistake with his set-up on Saturday and nothing he did on Sunday dispelled that. What would be most interesting to find out is who makes the final decision to go a certain way on set-up. If the McLaren team are sitting on their hands and saying “it’s your call, Lewis” then that doesn’t bode well for the future, because the idea behind the move to Mercedes is that he can make more decisions himself.
Button was faster in qualifying and the race, and had his gearbox gone unchanged he’d probably have come third behind Mark Webber – and Grosjean would have taken out Kobayashi at the first corner.

Mercedes
Race: Schumacher
Season: Michael Schumacher 8 – Nico Rosberg 7
Michael is already having little digs at Lewis Hamilton. His quote after qualifying – that Hamilton slowed him because he didn’t know which way he was going at a certain point on the circuit was the kind of niggle you might get from a driver struggling to cling onto his seat – not a seven times World Champion. Every driver could say that about five drivers per qualifying lap. However the brighter point is that Schumi outqualified his team-mate and takes the TMW lead again.

Ferrari
Race: Alonso
Season: Fernando Alonso 15 – Felipe Massa 0
It’s pretty safe to assume that if Fernando had all four tyres attached he would have made it through Turn 1 and finished the race in front of Felipe. So even though Felipe climbed aboard that stranger, the podium, it’s unfair to give him the TMW points.

Lotus
Race: Raikkonen
Season: Kimi Raikkonen 12 – Romain Grosjean 3
Grosjean’s accident in Suzuka looked to be one of his worst. What is even more worrying – yes, more than starting a grand prix a few rows in front of him – is that it’s now a few days after the event and the FIA have done nothing. It seems pretty pointless bleating on about safety and safety standards when something so obvious as banning the crazy guy hasn’t been done. Grosjean took 18 points away from Mark Webber and Red Bull on Sunday and there’s been no redress.
Raikkonen was unlucky to hit Alonso, though his resultant lack of front wing elements probably meant that he couldn’t challenge Hamilton for fifth.

Force India
Race: Hulkenberg
Season: Paul DiResta 8 – Nico Hulkenberg 7
The drivers know that Suzuka can be full of knife-edge perils and Paul and Nico ably proved the point sharing out two serious offs in practice – one at Spoon and one at Degna. It was a monumental achievement for the Force India team to put Hulkenberg’s car back together after FP3 and equally so for the Hulk to go out and put it straight into P6. Di Resta’s race car was broken from the start but it’s going to be fun in the last six races if we can have them starting side by side.

Sauber
Race: Kobayashi
Season: Kamui Kobayashi 5 – Sergio Perez 10
It was Perez who took on the role of banzai Sauber attacker at Suzuka, and he achieved only a 33% success rate. However his ability to find the run-off at the edge of the track was 66% and the 50% of the run-off areas that he found were gravel, and they managed to keep him for 100% of the rest of the race. Kobayashi, on the other hand, drove a superb-under-pressure final stint to delight the crowd.

Torro Rosso
Race: Ricciardo
Season: Daniel Ricciardo 8 – Jean-Eric Vergne 7
Daniel Ricciardo made the most of the fractured start to get a good position (P10) after Lap 1. What helped him hang on to a good race position was having a Marussia in P11, a Caterham in P12 and his team-mate in P13 during the early stages.

Caterham
Race: Kovalainen
Season: Vitaly Petrov 6 – Heikki Kovalainen 9
It’s becoming a real dog fight between the Caterham and Marussia teams and at Suzuka Heikki was only just in front of Timo Glock. Tony Fernandes’ football team is bottom of the Premier League and his F1 team are second bottom of the F1 constructors’ table. You have to hope that his airline’s doing better. Heikki was miles better than Vitaly in Suzuka and the chances of him staying at the team are about as likely as Pussy Riot playing at Vladimir Putin’s 60th birthday party.

Marussia
Race: Glock
Season: Timo Glock 9 – Charles Pic 6
Timo was very racy in Japan. Having beaten the Caterhams in Singapore when they hit trouble, he kept Kovalainen in sight till the flag.

HRT
Race: De la Rosa
Season: Narain Karthikeyan 2 – Pedro de la Rosa 12
De la Rosa was in superb form in Suzuka outqualifying a Marussia and a Caterham. In fact it was the three most experienced F1 pilots who were in command at the Japanese track – Kovalainen, Glock and de la Rosa above Petrov, Pic and Karthikeyan.

Jonathan Legard’s ‘Creative Commentating for Radio’ Workshop
Jonathan was back behind the BBC Radio 5 microphone in Suzuka and they had co-opted Sam Bird from Mercedes to substitute for the absent Jaime Alguersuari. The BBC’s vicar-soundalike proceeded to give us his usual array of Legardisms – it’s not a good lap, it’s a “decent lap”. Sadly there was no “I bet that’s going to ginger his ideas up” as we’ve enjoyed in the past, but there was an unusual description of an overtaking move.

Imagine somebody’s just made a red hot overtaking move on the track. It’s reasonable enough to assume that a radio commentator would tell you where it was rather just exclaim madly, like they’d just caught the chief choir boy snogging the head of the parochial