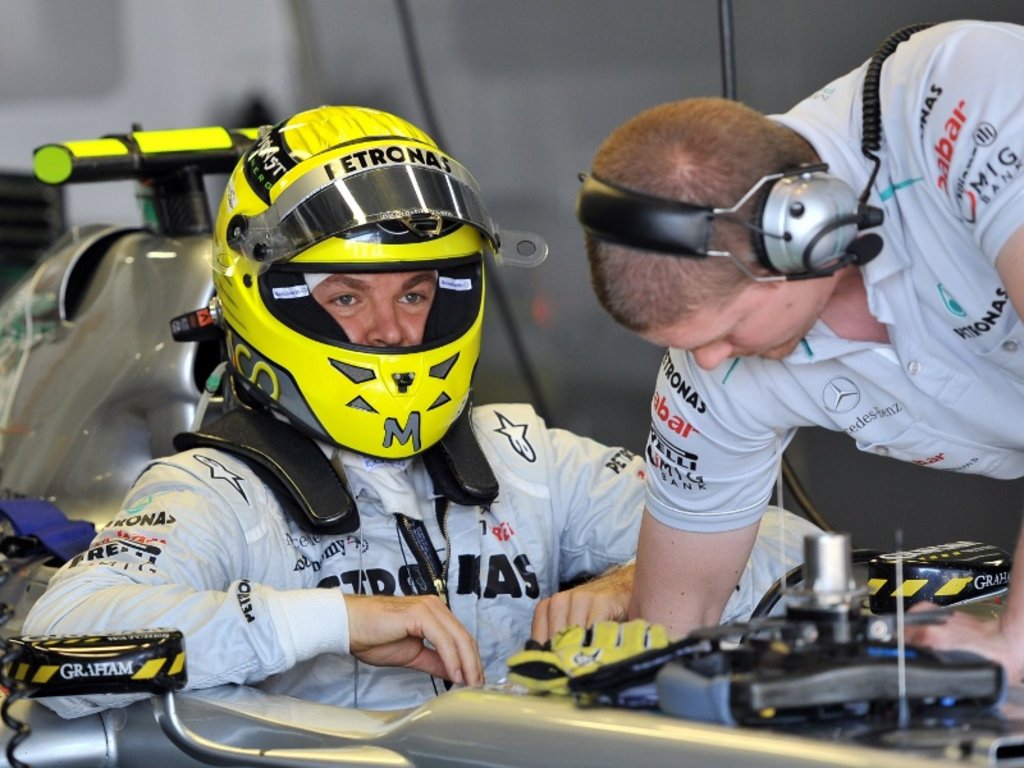 Seb and Fernando continued to crush their team-mates, while Jenson edged out a gap to Lewis and Michael closed on Nico…

McLaren
Season: Hamilton 6 Button 9
Race: Button
Lewis seemed to be afflicted by a lack of vision in his “Murr-errs” as DC likes to call them. In Q3 he didn’t bother to look at them as he approached the chicane for his second run – though if he did he would have been spoilt for choice with Webber one side and Schumacher the other (It’s a pity that we didn’t get to see Michael’s onboard, that would have been enlightening). Then in the race he allowed Felipe Massa to sneak up on the outside going into the chicane again. They often say that professional racing drivers lack a proper childhood – they’re karting every weekend from the age of four. This is true of Lewis and he would have been totally useless at 1-2-3 Block Home where you have to sneak back and touch the wall. He would have been IT forever. Anyway, another needless encounter with Felipe Queen of Handbags in the race. As for Jenson, he continued his long record of finishing every Japanese Grand Prix – this was his 11th – and with his best result to date.

Red Bull
Season: Webber 2 Vettel 13
Race: Vettel
Seb got away with an opening lap move that probably should have been penalised. It’s not correct to say – as the BBC commentary team did – that Charlie Whiting and the stewards are too busy to penalise drivers in the hurly burly of the sprint down to Turn 1 – if there are accidents, there is a price to pay. Had Jenson Button not taken to the grass there would have been an almighty accident right in front of the entire field. One of the reasons it didn’t look quite so bad is that on some opening laps, drivers actually choose to take to the grass to get an advantage and make up places. In Jenson’s case he was lucky not to lose more places than he did. As for Seb’s race, for once the roll of the dice didn’t quite go his way. Mark didn’t have such a bad start this time round, but he really should have been further up the grid. It’ll be interesting to see if Schumi returns the ‘love bump’ he got from Mark after Webber got held up behind the Mercedes.

Ferrari
Season: Alonso 13 Massa 2
Race: Alonso
A great qualifying effort from Felipe Massa. Martin Brundle had a tip-off that Fernando sacrificed his qualifying speed for a set-up that would help him in the race, but he wasn’t substantially quicker than Felipe. With Alonso expressing a desire to finish P2 in the World Championship Massa won’t be released of his obligations any time soon, but at least there’ll be Brazil. Nothing will stop him there… apart from the inevitable accident with Lewis.

Mercedes
Season: Schumacher 7 Rosberg 8
Race: Schumacher
Nico didn’t have the chance to outqualify Michael, but Schumacher looked far more adept around Suzuka. Considering he’s got eight poles and six wins that’s a bit of an easy assertion. Michael was ahead of one Ferrari and snapping at the heels of a McLaren at the end of the race, so there is progress.

Rosberg’s qualifying problem with his hydraulics put him too far back on the grid. Tenth place for Nico wasn’t that good a result in a race that was closed up by the Safety Car. Sergio Perez got eighth place from 17th on the grid while sounding like the BEFORE footage for the Lemsip Man-Flu Extra Strength advert. Ross Brawn still needs his ever-expanding collection of technical directors to get Mercedes closer to the top three. With Tony Fernandes demanding results from Mike Gascoyne at Team Lotus, then Ross might be obtaining another one soon.

Renault
Season: Heidfeld 7 Petrov 7 Senna 1
Race: Petrov
Renault were back on it at Suzuka after a nightmare in Singapore. Petrov actually completed some racing laps this year which was an improvement from last. Great qualifying to get both cars in the Top 10, especially when you consider their combined inexperience at setting up F1 cars.

Williams
Season: Barrichello 8 Maldonado 7
Race: Maldonado
A pretty dismal weekend for Williams with so many running repairs to cope with through free practice. Rubens had only just given an interview about the folly of hiring inexperienced drivers who drive the car off the road, when he drove into the barriers and wrecked two corners.
Maldonado put in a great performance to beat Rubinho on a track where knowledge comes over many years.

Force-India
Season: Sutil 6 Di Resta 9
Race: Sutil
It was nip and tuck all the way through different phases of the race, but Sutil won out in the end.

Sauber
Season: Perez 8 Kobayashi 7
Race: Perez
If you wanted any driver to have a decent race at Suzuka it was Kamui Kobayashi. Takuma Sato may have qualified his Honda in P4 before now, but it’s Kamui San who looks to be the best F1 driver Japan has ever produced. On Sunday he contrived one of his worst ever starts and you felt for him.