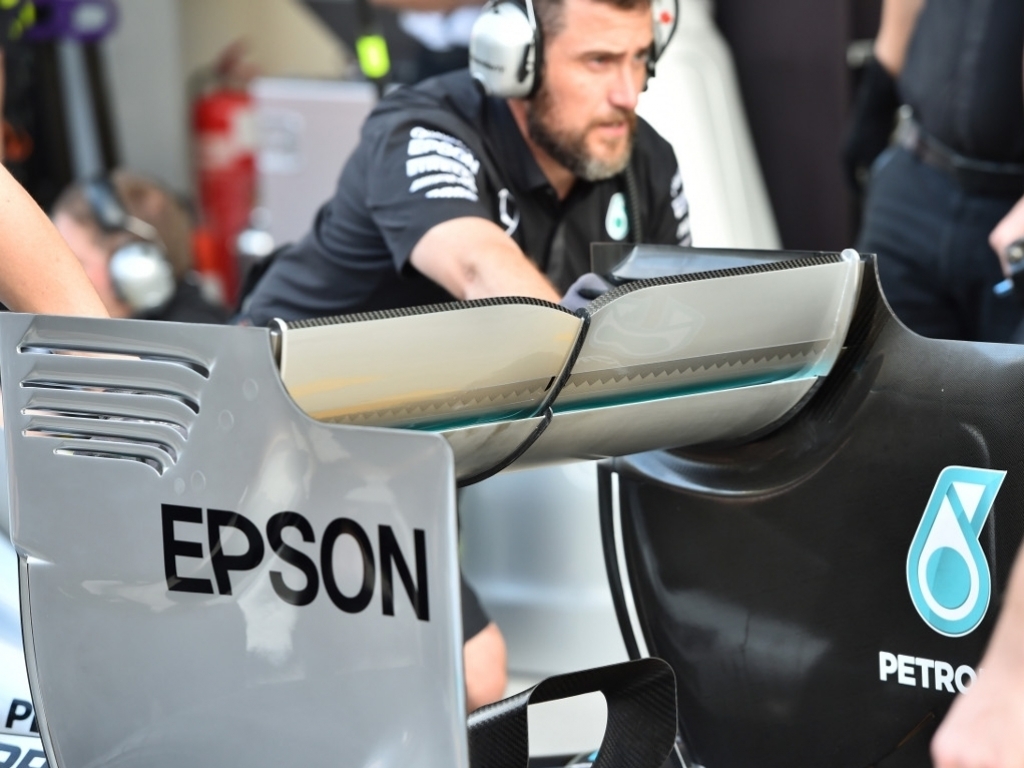 Another season done and dusted, and whilst the teams switched their focus to next years challengers some time back, in Abu Dhabi we continued to see glimpses of what those changes might hold for 2016.

Mercedes continued to trial their hydraulic 3rd suspension element, having tried to hide their intentions in Brazil. They also trialled some stickers to influence rear wing performance. The stickers were embossed and featured serrated edges, tripping the airflow as it moved over the wings surface. The idea of which is to re-energize the flow, improving performance.

It’s something that takes careful consideration though, and is why we no longer see teams placing sponsorship logos on the wings, unless the vinyl spans the entire surface of the wing. Case in point is Williams, who, as recently as the Mexican GP had initially planned to place stickers promoting the latest Bond film on their rear wing but reconsidered when they realised how much it would disturb the airflow over the wing.

Whilst Mercedes’ ‘S’ duct test in Brazil may have just been a cover for the suspension test, it may have highlighted thoughts from the team on a change of chassis height for 2016. Red Bull conducted a test in a similar vein in Abu Dhabi, placing a sight panel on Daniel Ricciardo’s RB11 with two distinctive shoulders. Such a test could be an indication that the RB12 will feature raised chassis sides in 2016.

The financial struggle of Lotus has impacted the team’s development throughout 2015, with very few large scale updates being bought to the car. Rumours that the team were working on another nose design came early in the season but it took until the last race to come to fruition. The new nose, likely bought to Abu Dhabi to get a gauge on the teams 2016 design featured a thumb style profusion, much like the Williams, Red Bull, Toro Rosso and McLaren design. With the nose regulations unchanged for 2016 the teams will continue to try and find geometric advantages going forward and so this is just the first phase for Lotus.

McLaren have spent the last few races refining their front wing concept, a carry over from Peter Prodromou’s days at Red Bull, something of particular importance as the team investigate avenues for improving the performance for their 2016 challenger. In Abu Dhabi, the outer section of the front wing was revised once more, increasing the height of the upper section in order to help turn ariflow around the front tyre.

At the rear of the car the team retained their offset suspension layout for 2015 albeit without the suspension blockers that they ran in 2014. The offset arms were changed in Abu Dhabi (highlighted in green) as the team prepare for how they’ll be able to set-up the MP4-31. This will not only have a mechanical impact but change how the aero is affected too, especially as the old configuration sat just above the diffusers transition line.

Pirelli insisted on a close loop scenario for their test that followed the Abu Dhabi GP, with only representative parts allowed on the car during the test. Whilst there was an array of tyre choices on offer, not all of them will make the cut for 2016, however, the teams are keen to understand any and all changes, especially with the introduction of the Ultra-Soft compound for 2016. In any case the cars will have undoubtedly been carrying more load sensors than normal, whilst some of the none official photo’s I saw, captured teams using flo-viz on the cars to establish how the airflow had been changed. Here’s a gallery of images released by Pirelli as the media were not invited to cover the test: http://www.somersf1.co.uk/2015/12/post-abu-dhabi-gp-pirelli-tyre-test.html

With a stable set of regulations heading into 2016 the field should narrow somewhat, as finding larger gains will become more difficult. I look forward to seeing what the teams have on offer come their launches before and unveils at the first test in February.