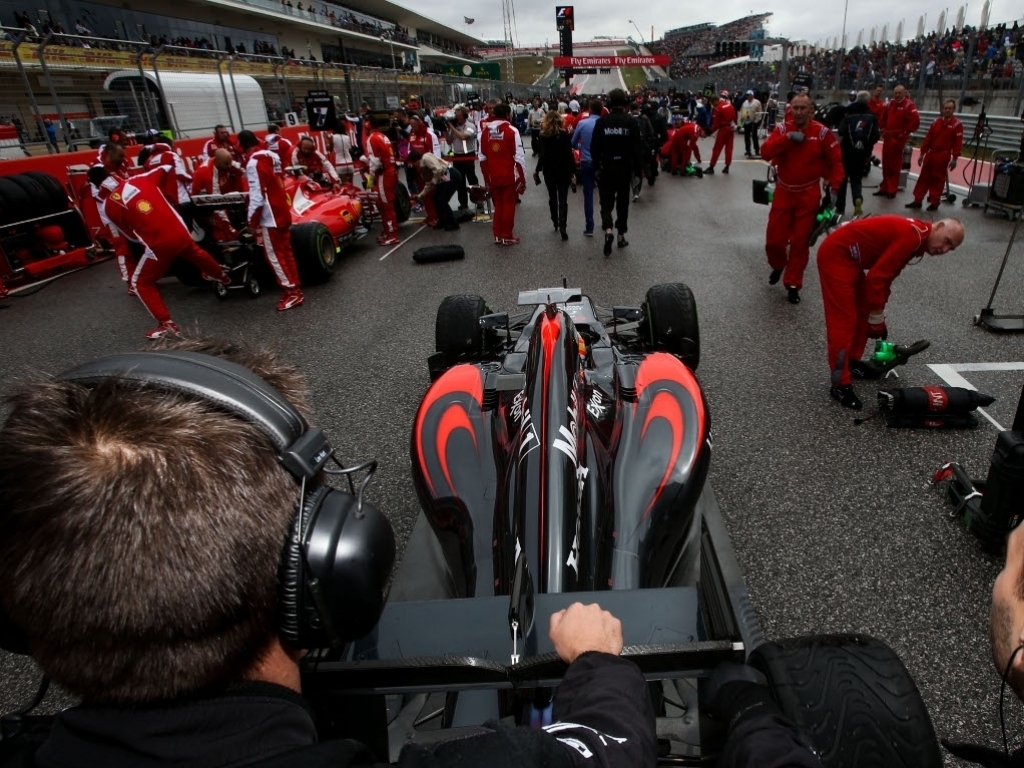 Action aside there was plenty on offer in terms of new parts at the US GP, and Matt Somerfield looks at McLaren and Ferrari’s upgrades.

Ordinarily when F1 ventures to the circuit of the America’s it’s drenched in sunshine, however, with the title almost in Lewis Hamilton’s reach it seemed mother nature wanted to add some extra spice to the occasion. A truncated GP weekend with limited running saw the teams having to think on their feet throughout the race, as the balance of power shifted back and forth dependent on the setup each driver had opted for and suited the prevailing conditions.

Action aside there was plenty on offer in terms of new parts for the US GP, please click on the links below to see the image and illustrations being described.

They may be out of the title fight but Ferrari arrived in Austin with a plethora of new parts for the SF15-T, even though they perhaps had with one eye on validating the parts that will be used on next year’s challenger.

A new front wing marks a bit of a philosophy change for the Scuderia as they take influence from other teams on the grid.

The design of the outboard section of the mainplane and flaps have been tightened, as you’ll note from the shape of the arcs (marked in purple). This’ll create a tighter wound vortex that is assisted by the addition of an inboard endplate canard (marked in yellow), which sits behind the main cascade and helps to turn the airflow up and around the front tyre, in-turn shaping the wake it sheds.

To make room for the endplate canard the team have also reshaped and relocated the infra-red camera which monitors the surface temperature of the front tyre (marked in red).

The mainplane now meets flat at the neutral centre section rather than using an arch (marked in blue). Inline with this change the previously conjoined upper flaps have been separated with their tips helping to change the Y250 vortex forms and moves down the car.

In order to maximise the change to the Y250 vortex the team also made alterations to their Turning Vanes (marked in green), re-purposed the leading edge splitter vanes (purple) and added a ‘Bat Wing‘ (yellow) which sits astride the ride height sensor (blue), much like Mercedes have used over the last two years. The ‘bat wing’ not only repurposes/aligns the airflow but sheds energetic vortices that assist in flow further downstream.

At the rear of the car the team have refined their diffuser gurney and mini winglet arrangement, combining the lower winglet with the gurney.

McLaren’s season has mostly hinged around the poor performance of the Honda powerunit, however, the chassis/aero department can’t rest on their laurels either. The arrival of Peter Prodromou from Red Bull has clearly had an impact on the teams approach. Some would say it’s almost a copy and paste of the Red Bull’s he’s left behind, with key components such as the front wing and slim line coke bottle at the rear of the car following very similar philosophies. However, aerodynamically other areas have to meet this challenge and as such the team have been investigating different setups over the last few races, not only to maximize this car but also build a framework for next year’s car.

The latest of these featured another facet of the Red Bull play book: more extreme rake. Raking the car (nose down attitude) provides the aerodynamicists with the opportunity to create more downforce, however, with the current regulations it can come at the expense of balance. To combat this the team made two major changes in Austin as they look to further pursue a steeper rake angle.

Front Wing
A revised front wing was at the teams disposal in Austin saw the shaping of the outboard section of the mainplane and flaps altered. As you can see in my comparison illustrations the inner arc has been enlarged, allowing what would seem like more airflow to turn outward around the front tyre and shape its wake. With the wings angle now more steeply pitched, owing to the rake angle, its operating window should be increased whilst being able to produce more peak performance too.

Furthermore, as the arc has been moved inboard the footplate section features several slots, which help energize the flow and direct it.

You’ll note that in making these changes the control strakes have also been moved inboard to better align the flow under the wing (most inboard strake marked in green).

A small gurney trim was also added to the upper flap (marked in yellow) just to help bridge the gap between the change in flow structures.

Rear End
At the rear of the car the rake angle also has a dramatic effect, enabling the designers to extract more performance from a taller diffuser. However, one of the problems associated with poor rear stability with increased rake is ‘Tyre Squirt’.

What is tyre squirt?
Tyre squirt is caused by the spillage of airflow off the rear tyre, which is then squirted laterally into the diffusers path, causing inconsistency and limiting performance. This phenomenon is increased by the deformation of the rear tyre making for a tough tyre pressure choice as you have to have a balance between aerodynamic consistency and mechanical grip.

The new specification Honda powerunit, previously mounted in Fernando Alonso’s car in Russia’s Free Practice sessions and subsequently removed for qualifying and the race, was used throughout the Austin GP weekend.

Honda spent the last of their four in-season development tokens on the I.C.E, three of which were focused on combustion elements and one on exhausts, the latter being quite a visceral amendment, with a change from a log style manifold to a branch manifold. The changes were made in preparation for 2016 with some of the core elements that require changing out of reach of this token spend.

The changes appear to be positive, as even though Austin proved to be a race of attrition the McLaren’s held their own throughout.  A feat that Fernando will be proud of considering the amount of damage he sustained in the opening lap.

His race was scuppered late on when it’s thought a fuel system sensor failed and he was left unable to defend the late charging Daniel Ricciardo who took 10th position before the team and Fernando were able to reset the sensor.