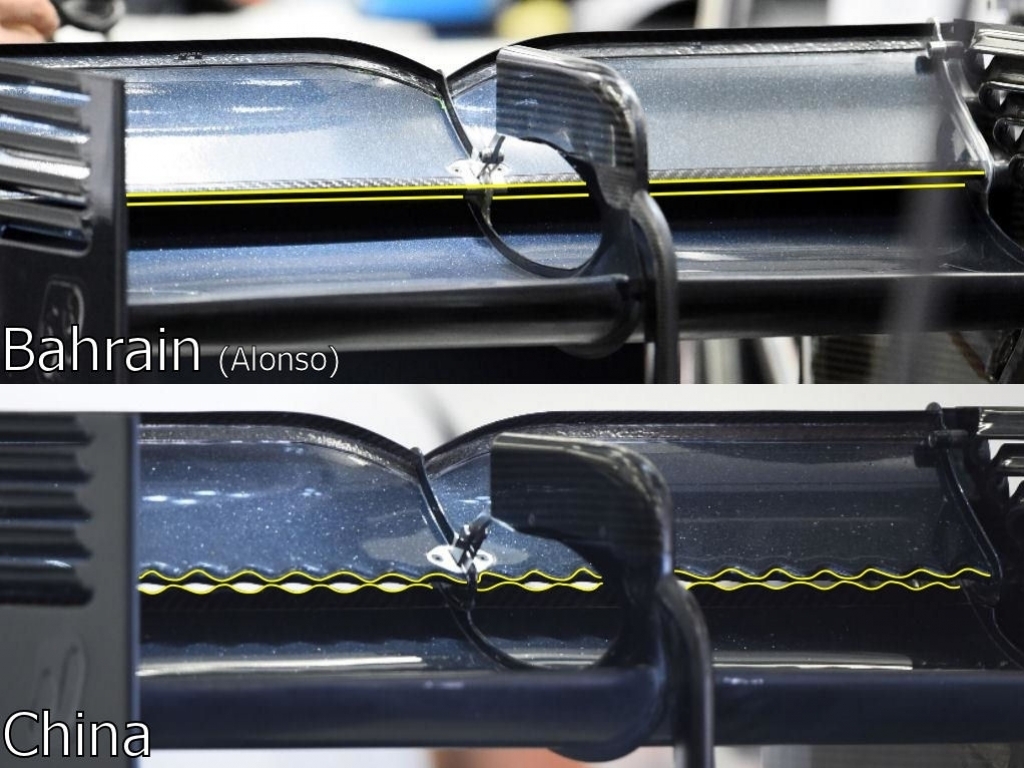 In his latest column, Matt Somerfield looks at the new rear wing top flap and mainplane that was introduced on Fernando Alonso's car in Bahrain.

McLaren have been working with Honda to periodically increase the performance of their powerunit, with hopes the Japanese marquee can unleash the full potential of the RA615H over the coming GP's.

However, standing still in F1 is not an option and so the aero team have had updates at each GP, as bringing them when the powerunit issues are resolved would lead to a protracted development plan.

In Bahrain the team introduced a new rear wing top flap and mainplane on Fernando Alonso's car, returning to a more conventional leading and trailing edge design. The design still used on Jenson Button's MP4-30 has been in use since Germany last year. "Tubercles" as found naturally occurring on humpback whales were used to vorticise the airflow passing over the flaps, increasing their aspect ratio and aid in airflow attachment.

It's widely accepted that the team used the Tubercles to assist attachment when the top flap closed after the use of DRS.  However, their use was also symptomatic of other aerodynamic structures causing issues at the rear of the MP4-29.

Much has been made, especially by the team, of the MP4/30's "size zero" rear end, which when compared to its predecessor is much narrower. The use of the 'suspension blockers' by McLaren in 2014 meant the team had to place the cooling outlets higher than is desirable. The hot, slow moving airflow dispatched by the outlets can be destructive to the rear wing, reducing the effect of the low pressure airflow under the wing, unbalancing the car during braking and cornering.

The Tubercles used on the MP4-29 and up until this point on the MP4-30 therefore marginalized this issue.  Now with a smaller, lower cooling outlet it becomes less of an issue, resulting in the return to conventional straight edge flaps.