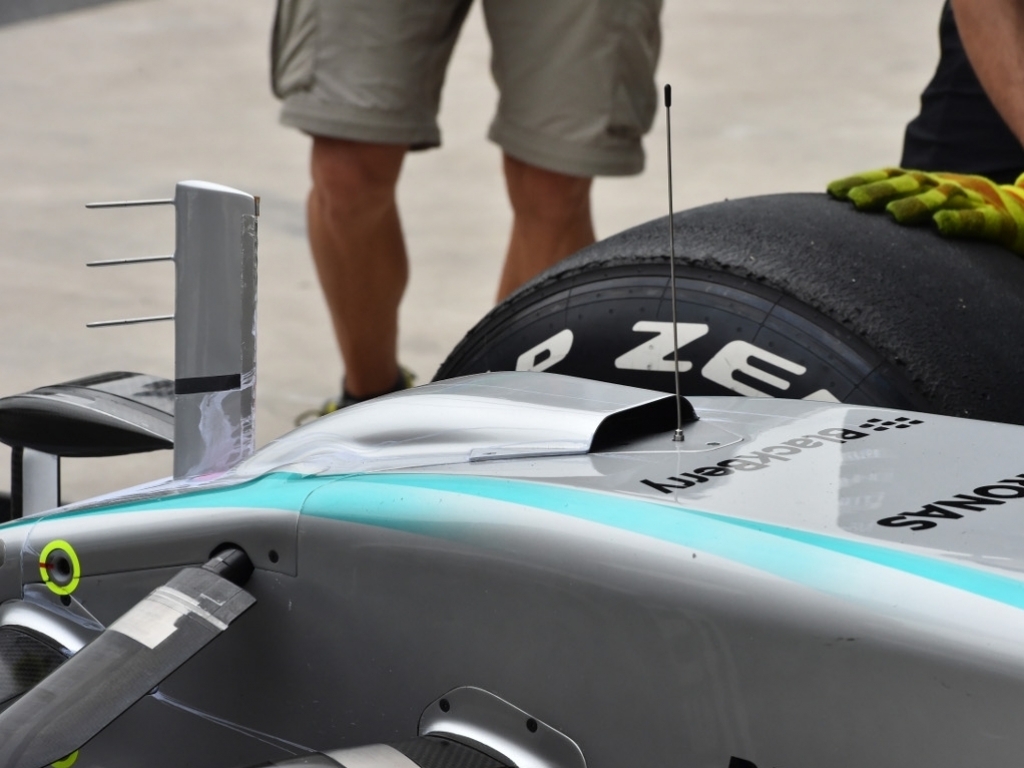 With one eye on the 2016 season, Mercedes applied several changes to the W06 at Interlagos. Matt Somerfield gives us the lowdown.

As the season nears an end and having already secured the Drivers' and Constructors' titles, Mercedes have taken the opportunity to assess changes for 2016. It was during Friday's first free practice session at Interlagos that the team applied several changes to the W06. The most obvious of these changes was the inclusion of a rearward facing duct on the chassis' vanity panel, emulating the 'S' ducts we already see adorn the RB11, MP4-30 and VJM08.

Ordinarily an 'S' duct, named as such because of its shape, is used to move airflow from the underside of the nose and eject it into the path of the airflow moving across the upper surface of the chassis. The ejected airflow draws the surrounding flow to the surface (Coanda effect), which would ordinarily detach, improving efficiency. An 'S' duct is therefore usually required when the angle of where the nose and chassis intersect is abrupt, something that was more apparent when F1 had step noses. There is also a compromise between the advantage it can give and the effect it's protrusion creates. As such, for this test the team applied flo-viz to the leading edge of the ducts wedge and the rear of the pitot tube stack, to detect how much flow separation the appendage created.

As the standard S shaped ducting, ordinarily mounted to the bulkhead, did not appear during the free practice session, it is unclear if the duct was operational. Although, it is possible for such a duct to run through the chassis, with airflow usually sent through the lower driver cooling slot (created by the mounting of the turning vane panel to the underside of the chassis) fed up through the chassis, through the heave damper aperture and out through the upper rear facing chassis duct.

However, just like a magician that uses sleight of hand to deceive during a magic trick, there was more going on than initially appeared to be the case. Mercedes were also investigating the viability of changing their suspension geometry for their 2017 challenger. Repositioning of the suspension and/or steering arms to improve the mechanical layout, will likely result in a more abrupt nose to chassis interaction. This was evident by the teams switching of mechanical components (suspension, pedals and steering rack components) after the session came to a close, whilst either side of the 'S' duct lay protrusions that aligned with the heave damper, suggesting the team needed additional space for the mechanical components.

No matter the actual reasoning behind the tests, what is clear is that with three months to go until the first pre-season test, the team are still validating the W07's layout. As is the norm, several concepts will have been followed and this was simply a fleshing out exercise, as the team hone in on the final configuration. Mercedes know that they face a much sterner challenge from Ferrari going into 2016, such has been their improvement over the course of the season. As such, the planned rule shake up for 2017 may come too early, as we could see yet another dominant force rise to the top, as Mercedes and Ferrari concentrate on the battle at hand.