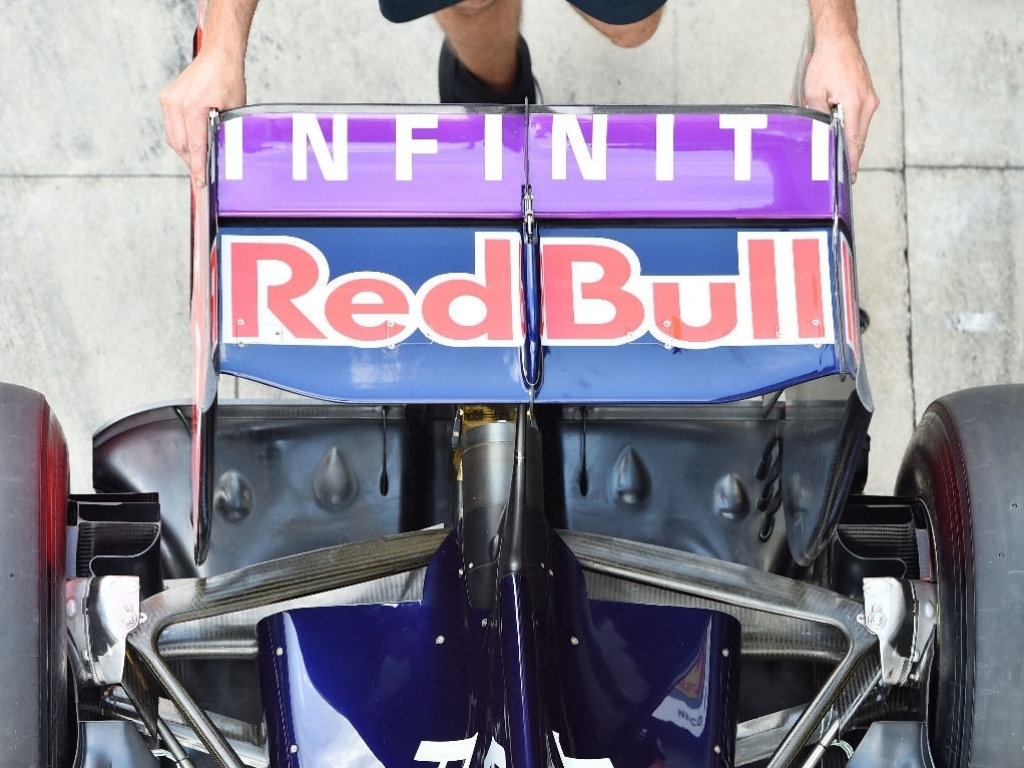 Monza, the temple of speed, a series of high-speed straights punctuated by chicanes and the Parabolica, make for the only true low downforce circuit on the calendar. As such, all of the teams look to trim their downforce levels in the quest for a higher top speed.

Mercedes
Not content with their domination thus far in 2015 arrived in Italy with a rear wing specification, specifically designed for the demands on the Monza circuit. The team ran the wing briefly in Free Practice at the Belgian GP to correlate their findings ahead of time. It's very similar to the 'Spoon' rear wing introduced in Belgium, but features a much shallower central dip to the mainplane, reducing the amount of downforce generated by the wingspan. Furthermore, the Y100 winglet used with the previous rear wing structure was absent, with the central portion not requiring the same level of assistance.

The team also made changes at the front of the car with a set of short chord upper flaps being used on the front wing, changing the Y250 vortex strength and orientation whilst also balancing the level of downforce being generated.

They heaped further misery on their rivals when they announced they'd be running a new specification power unit in Monza, spending the remainder of the seven tokens they had available for the season. The upgrade was only available to the 'Works' Mercedes powered drivers, with the upgrades to be run by the other Mercedes powered teams according to their usage schedule.

Whilst Lewis Hamilton used the new specification for qualifying and the race, Nico returned to another from his allocation as a precaution, following a cooling leak during Free Practice. He was eager to point out this was the cause of his qualifying deficit, with the power unit nearing the end of its lifespan, undertaking its sixth race.

It's unclear which elements of the power unit were changed, as both drivers took a fresh allocation of all six components, however, seven tokens goes a long way to improving various aspects of the power unit. Furthermore, it's intriguing that they mention they already have an eye on 2016 with this power unit specification, laying the groundwork for a fuel being worked on with Petronas for 2016.

Ferrari
The surprise package during qualifying, the team retained their low downforce front wing first used in Belgium. The triangular flaps change how both downforce and the Y250 vortex are generated. At the rear of the SF15-T the team utilised a mainplane and top flap on their rear wing that featured a lower angle of attack, whilst the DRS pod was reduced in height to suit and the number of endplate louvres reduced from five to three (Spa specification rear wing for comparison).

The Scuderia had some power unit upgrades of their own for Monza, using three of their remaining seven tokens. Unlike Mercedes we can narrow down their spend, as the drivers only took new ICE, Turbochargers and MGU-H's, suggesting changes were made to the way the air is charged and/or combusted.

Williams
The super efficient design strategy that the team opted for in 2014 has gradually given way to more downforce over the course of the 2015 season, as the team look to stay with the leading pack. For Monza the team retained most of this package, in order to give the drivers a good balance. However, the rear wings upper flap height was trimmed significantly to shed downforce and drag, whilst the mainplane and upper flaps angle of incidence were also reduced (See the specifcation used in Belgium for comparison)

Red Bull
Still suffering from a lack of power, owing to the Renault power unit, the team went in search of significant downforce and drag reduction. The rear wing featured a redesigned mainplane with swept back outer leading edges, whilst the upper flap also curved inwardly at the edges, these changes were made to change the way tip vortices are formed, reducing drag.  Meanwhile, the low angle of attack meant the team didn't bother with louvres in the endplates, marginalizing the downforce loss.

Force India
Another team to adopt a Monza specifcation rear wing, however, theirs was much less aggressive than some of their counterparts. A reduction in flap angles and chord lengths were married to a reduction in the quantity of endplate louvres (Five down to three) as the team took a measured approach to drag reduction.

Sauber
The Hinwil-based team have been a little light on development during 2015, consolidating performance and playing the long game. The rear wing used by Sauber is a copy and paste of a 'Bow' design they've used before, with a raised central section reducing surface area with which to produce downforce, with an eye to also reduce drag.

McLaren
Still struggling at the behest of their Honda woes the Woking-based squad applied some changes at both the front and rear of the car in order to reduce drag. The older specifcation nose that was jilted by the team in Austria made a return, highlighting how important the shorter nose is, in their eyes at least, in creating downforce downstream, which in-turn can increase drag, dependant on the surfaces involved.  Just like the rest of the field, McLaren made changes to the rear wing of the MP4-30 in order to reduce both the downforce and drag being generated. Gone were the endplate triangular strikes, used to encourage an upwash connection between the diffuser and rear wing flaps, whilst the flaps themselves were reduced in height and their angle of attack reduced significantly.