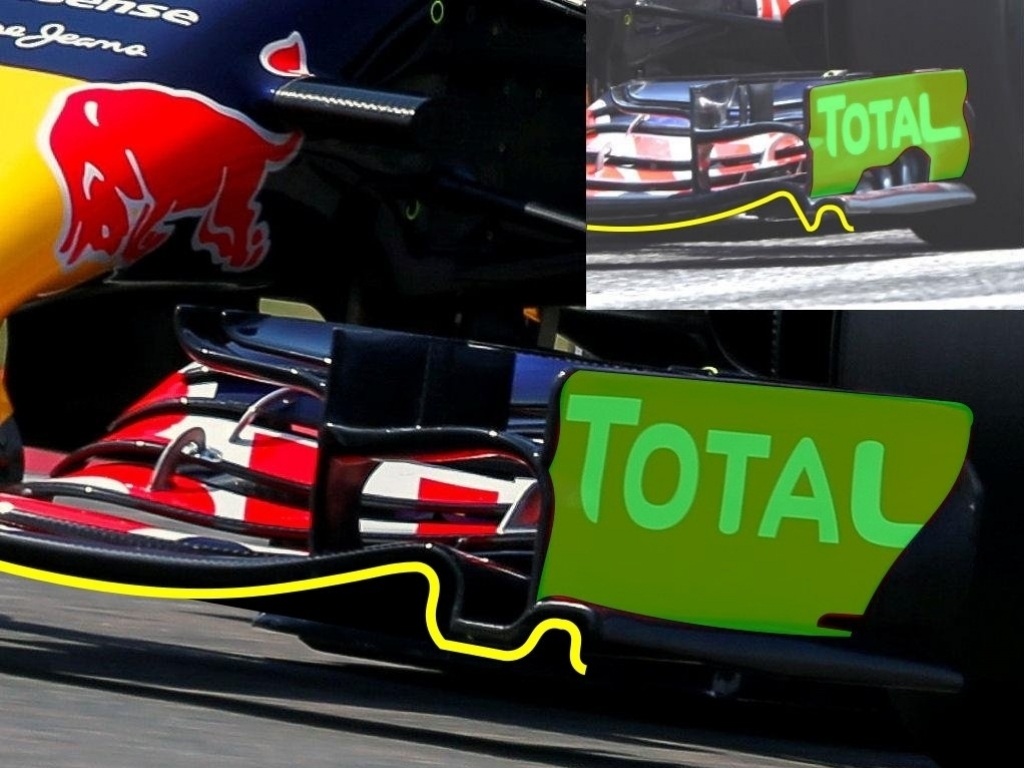 Red Bull frustrated by both the performance and fragility of the Renault powerunit continue to develop the RB11, arriving in China with a new front wing.

The changes made by Red Bull are considerable in terms of how the wing operates at the outermost extremities, although not as aggressive as the new Mercedes front wing I've already looked at: http://planetf1.com/driver/3260/42568/Merc-Debut-New-Front-Wing. Red Bull's new wing also looks to compartmentalise the outer section of the front wing in order to control how it influences the front tyres wake, whilst maintaining the level of downforce the flaps generate.

Previously (see inset) the team unified the outer flap profiles with the footplate (note the mainplanes shaping marked in yellow on both images), which allowed the outer more concentrated vortex formed by the footplate to pull the inner vortex around the tyre, whilst having a minimal effect on flap performance.

The new design moves the inner mainplane arc away from the endplate, increasing the size of the vortex it's able to produce, whilst directing its flow further outbound.

The new design also features a new endplate that forms a continuous surface where previously a hole allowed airflow to pass between (marked in green).The endplates leading edge no longer curves as it meets the footplate, whilst its trailing edge now has an outwardly curved triangular section rather than creating a juncture with the rearward flap.

Just like Mercedes they intend to better control how the tyres front wake moves back inboard toward the car, potentially hindering rear downforce and increasing drag.