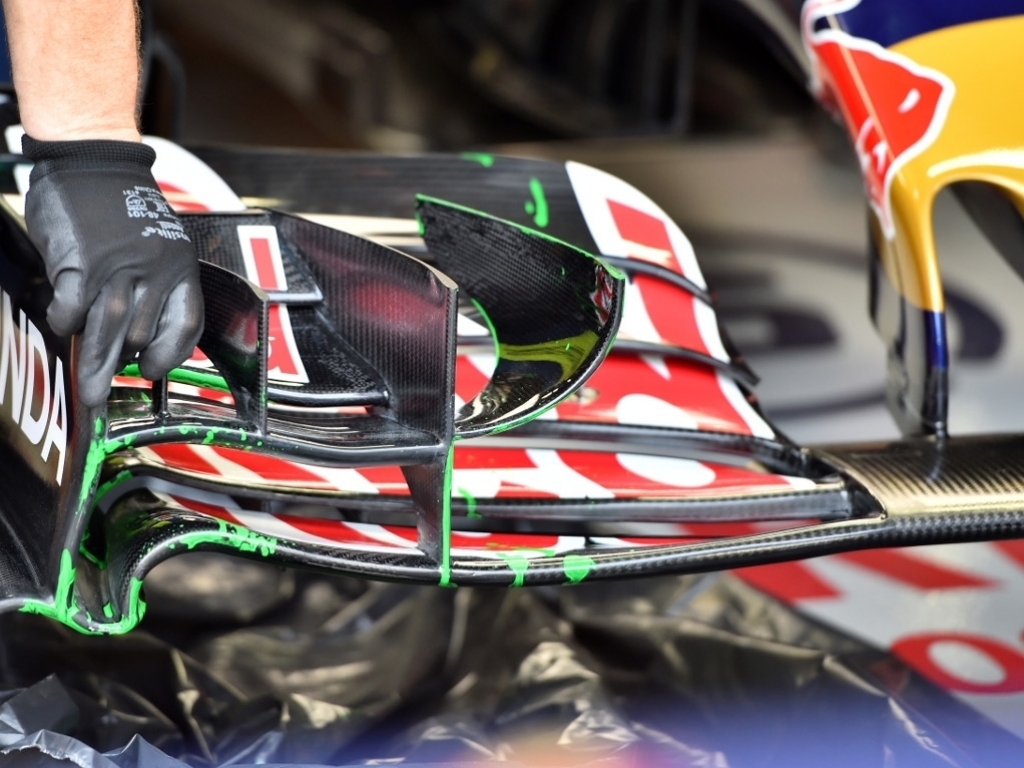 The first of the flyaways following the ‘European leg’ of the season and the teams return to a high downforce street circuit, as such there were plenty of new parts available to the teams.

Ferrari have taken a leaf from Mercedes book with the Scuderia mounting winglets either side of the crash structure, as they looked to further tease the exhaust plume upward. Working in unison with the Y100 winglet (Monkey Seat) they help to provide a better balance for the drivers.  It’s interesting that they have also temporarily increased the height of their crash structure, which will also change the trajectory of the exhaust plume above.

The team have also revised the tyre squirt slots in the floor ahead of the rear tyres, increasing the number of slots from 3 to 9. Diffuser performance can be compromised by airflow being squirted laterally into its path and so the teams are always looking at ways to condition this. Furthermore, changes made by Pirelli and FIA to the mandate on tyre pressures results in the tyre deforming differently too, this could be an instance where Ferrari have reacted rapidly to such changes or could just have been part of their initial plan for Singapore.

Williams arrived in Singapore with a new set of turning vanes, looking to change how the flow under the nose affects flow structures downstream.  Having previously utilised a 2 slot arrangement (last amended in Austria) the 3 slot ones used in Singapore are used to match the demands of the low speed yet high downforce circuit.  The additional slot allows airflow to move between the surfaces, energising the slower moving airflow, reducing the risk of separation.  The upshot is better performance at lower speeds, improving performance to other key areas like the splitter, bargeboards and sidepod undercut.

Red Bull arrived at perhaps one of the teams favourite circuits with only small changes planned. Like Williams the team also revised their Turning Vanes creating a wider bellmouth toward the underside of the nose, a small geometry change but one that could have a decent effect on the airflow it comes into contact with, changing the airflow downstream.

McLaren arrived in Singapore with numerous new parts for the MP4-30.  The front wing was revised with an outboard canard (highlighted in green) utilised for the first time this season (used throughout 2014) and the first time since Peter Prodromou arrived from Red Bull. The canard creates a pressure gradient and thus a vortex is shed, this will help to draw airflow around the outside of the front tyre and reshape the wake it generates. The demands of the high downforce street circuit mean that although this will undoubtedly add drag it will also improve flow structures downstream, improving overall downforce.

The team also revised the front wings connecting pillars (highlighted in green), extending and reshaping them in such a way that they’ll better shape the airflow moving under and around the nose. In order to maximize these changes the team have also revised their Turning Vanes, reshaping them and reducing the length of the slots placed in them.

They redesigned the camera mounts too, reducing their connection to the nose and improving airflow around them.  This should have a marked effect on the airflows interaction with the suspension elements aft of them.

At the rear of the car the team trialled a revised exhaust position and new Y100 winglet (Monkey Seat) during Free Practice. The exhaust height is something that can be modified by the teams in order to get the desired effect, be it in terms of engine performance or aero effect, in this experiment McLaren had raised the exhausts position.  The team were trying to leverage an aerodynamic effect with a change in the exhaust plumes trajectory matched by the introduction of the Y100 winglet.  The idea is to assist both the diffuser and rear wing, utilizing the exhaust plume to both energize and connect both airflow structures, increasing downforce, the problem is that this also increases drag, something that McLaren have to measure carefully against their power deficit.  Neither driver used the Y100 winglet during qualifying and the race.

Toro Rosso introduced a new front wing for Singapore, featuring a new cascade arrangement.  In keeping with the desire to change the front tyre wake at a lower speed circuit both cascades are turned outward more aggressively.  The outer cascade has been increased in width and its shape slightly altered (as can be seen by the green arrows) whilst its connection to the mainplane has also been increased (highlighted in yellow) in order to sustain the extra width and load.  The inner cascade (highlighted in blue) is reminiscent of a an ‘r’ cascade but of course is hung from the outboard cascade rather than being mounted to the mainplane.