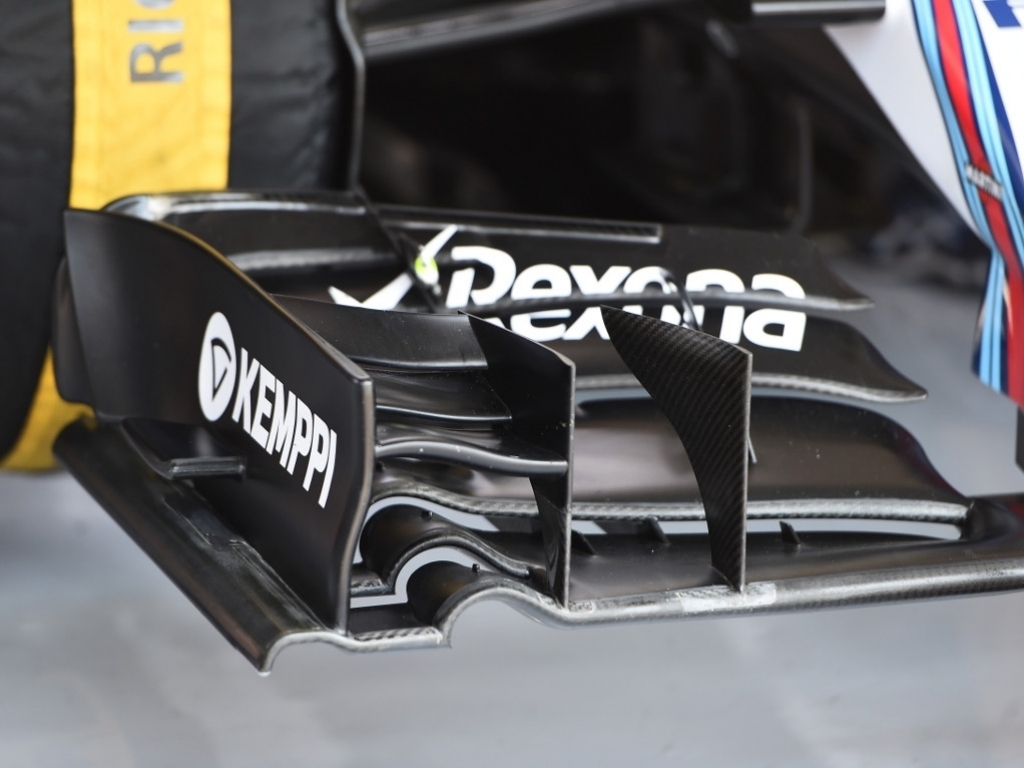 Matt Somerfield looks at Williams' front wing, which has received positive feedback from the drivers after being introduced at Silverstone practice.

The boys and girls in Grove have been busy of late with a plethora of changes to the FW37 in recent races. They briefly ran a new front wing design in Free Practice at Silverstone but shelved it to concentrate on setup. However, the initial feedback from the drivers was extremely positive, with the change in ethos getting a big thumbs up.

The new wing is a sea change in their approach with the outer mainplane & flap design echoing the Championship leading Mercedes design introduced earlier in the season. The idea of which is to compartmentalize the wings functions with the outboard section used to control the front tyres wake.

It's really only the cascades that have been retained with the new wing, which as you can see I have illustrated with them removed allowing you to see the detail in behind them.

The endplate (purple) has been elongated, in order to bend around over the footplate at the trailing edge. Meanwhile a canard (light blue) has been added to the outboard edge of the endplate which will create a pressure gradient, which will shed a vortex and help to pull the airflow outward around the front tyre.

The inner arc has been moved further inboard, creating an expanding tunnel that deals almost exclusively with shaping the front tyres wake (marked in green), whilst the movement of the arc means the space leftover is populated by several slots that help to shape the airflow and keep it attached to the inner surface of this tunnel (marked in yellow).

The problem with an aerodynamic c-change of this size means that this is just the first phase of a development curve, that'll take several GP's and several new parts to fully extract the benefits.