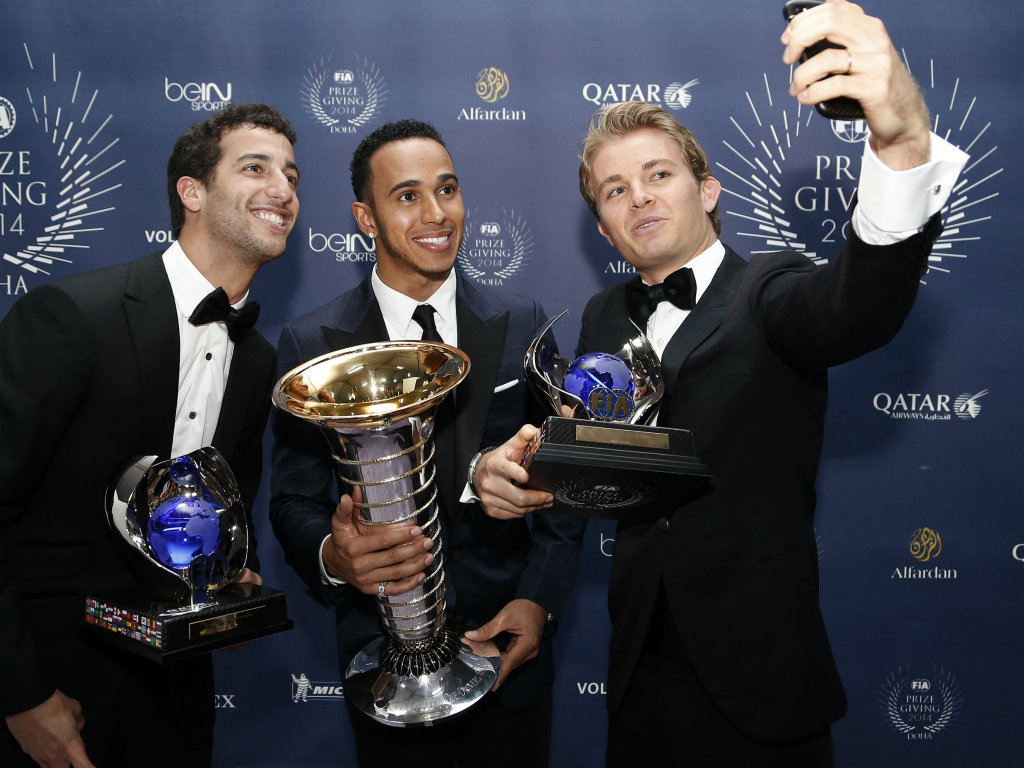 We’ve selected some of the key quotes from 2014 – see if you can remember who said them.

Quote 1: “In my opinion it’s the best decision ever. I saw the car first in the wind tunnel and it was fantastic. It’s completely a different car, the most interesting car in the paddock, the most beautiful car, aggressive. I think they’ve done a really good job in terms of design.”
Quote 2: “I don’t like this sort of taxi-cab driving.”
Quote 3: “They informed us [to turn the flow down], and we informed them that we had serious concerns over their sensors. We believed in our reading, otherwise there was a situation where you are reducing significant amounts of power in the engine at a time when we believe we fully comply within the regulations.”
Quote 4: ” I don’t think the way things are at the moment are acceptable to the public. People buying tickets expect to see what Formula 1 used to be. The engines are without doubt incredible, the amount of power they produce for the small amount of fuel. But I don’t think it is F1 business. They should do it in touring cars or something – not in F1.”
Quote 5: “We have to lose so much weight and there is not so much we can lose anyway.. You have to be careful. I lost 3-4kg compared to last year and I tried to be very light last year already.”
Quote 6: “If you have shi*** engines like last year, and nine races in a row like Vettel, to finish all of them, this is easy.”
Quote 7: “______ is working extremely well with the team, collaborating with his engineers, with the other car across the garage, helping us to drive this car forwards. He has class written all over him and we know that within in a very short space of time, we will also be seeing the results on the track.”
Quote 8: “We have spent four good years together already, we are in our fifth year together and we both want to work together in the future, but it is just not the right time [for talks]. We have a lot of other issues to solve first before we start to think about the future too much.”
Quote 9: “When you lose ERS it doesn’t harvest anymore, then any braking is done by rear braking, so that is why the rear brakes overheated. That made it massively difficult: I needed to cool the brakes and lost speed on the straights. I was able to hold off the pack behind me until two laps until the end so it’s still a really good result.”
Quote 10: “What I find amazing about him is how calm he is in the car. When he’s on the radio it’s like he’s sitting down with a cup of tea and driving one-handed. It’s quite remarkable. He’s very calm, collected, takes everything in his stride, and he’s really enjoying his job.”
Quote 11: “We got the belief it would rain, the radar clearly indicated it would. As long as we had this belief we saw the opportunity by doing what we did to get some key positions. It’s true that with everybody on slicks we understood something was wrong and clearly we understand our call was wrong.”.
Quote 12: “We are not burning money and offering ridiculous money, that was always not the case. He’s on a similar contract to all the other drivers, but it was just the chance to get an extraordinary, outstanding talent, which doesn’t come every day.”
Quote 13: ” Every time I want to push or make something happen, it just doesn’t. I think it is a characteristic of this year’s car in combination with the downforce we have, with the tyres. It just maybe doesn’t give me yet what I want in a certain area of the corner. That is not an excuse, because in the end I have to get the best out of the car. We’ve done a lot of progress but there is a lot we can do better.”
Quote 14: “I was not so sure about keeping the tyres until the end – for me it did not seem possible, but I changed completely my driving style. “I was driving like a grandmother! Completely like that.”
Quote 15: “Me? I just keep it to myself and do my talking on the track.”
Quote 16: “I remember at the beginning of the [2014] season I said we were here to win races. So you could argue that as we didn’t win a race and we’re using words such as ‘domination’ then we’re setting ourselves up for an almighty fall. But domination doesn’t come in a short period of time, it takes time.”
Quote 17: “Yeah, I’m like a honey badger.”

Answers
1. Pastor Maldonado – talking about his switch from Williams to Lotus
2. Luca Montezemolo talking about the new hybrid engines
3. Christian Horner, talking about the RB10’s exclusion from the Aussie GP after Red Bull refused to turn their fuel-flow down.
4. Bernie Ecclestone bemoaning the lack of noise from the 1.6 turbos.
5. Adran Sutil talking about the diet regime that the new formula has imposed on bigger drivers.
6. Niki Lauda celebrating four Mercedes victories in a row.
7. Ferrari technical chief James Allison.
8. Jenson Button talking about his future at McLaren in June.
9. NicoRosberg detailing his ERS problem in Canada.
10. Adrian Newey on Daniel Ricciardo.
11. Eric Boullier on Mclaren’s switch to wet weather tyres in Hungary when no more rain came.
12. Helmut Marko on Red Bull’s signature of Max Verstappen.
13. Sebastian Vettel on his unhappy relationship with the RB10.
14. Felipe Massa on tyre preservation in Singapore.
15. Lewis Hamilton
16. Ron Dennis on his plan to wrest Mercedes’ laurels with his new McLaren-Honda partnership.
17. Daniel – the honey badger – Ricciardo