Home Uncategorized The Rise Of The Sleeping Giant?…4 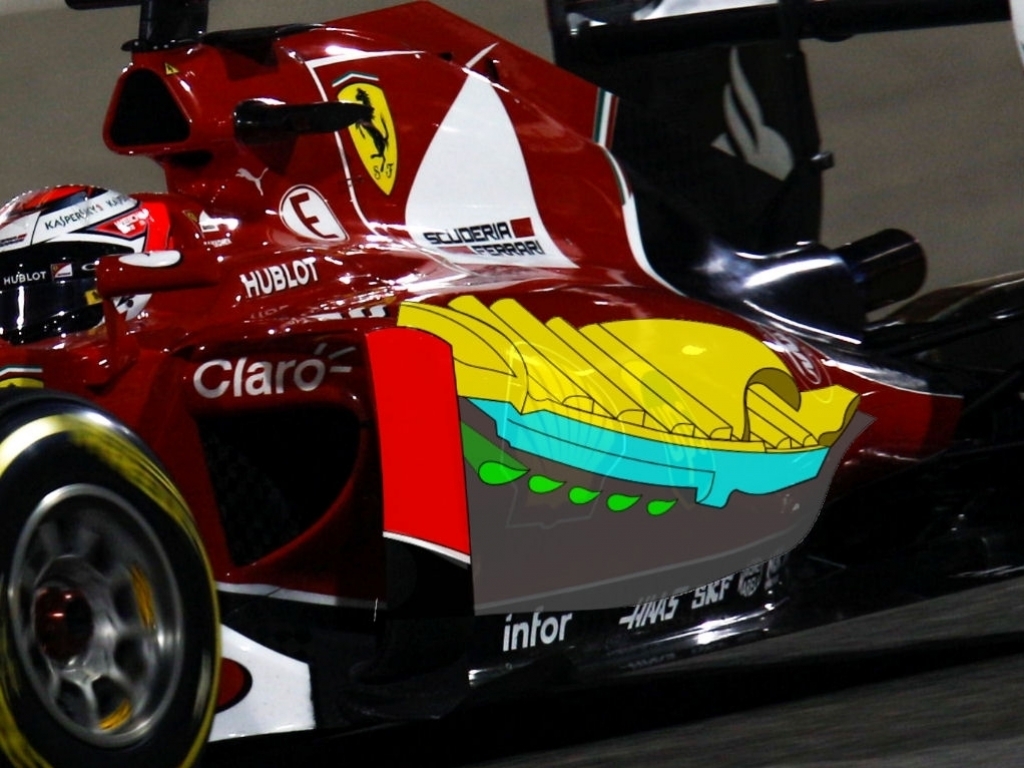 At the core of the SF15-T lies Ferrari's V6 hybrid powerunit, an area where they've made strides in 2015. Having found the loophole in the regulations that meant the engine manufacturers weren't held to a homologation deadline in 2015, the Scuderia spent 22 of their development tokens ahead of the season, leaving 10 to be spent during the season.

The actual design philosophy employed by Ferrari on their powerunit components was sound, it was predominantly the packaging and implementation of the turbo, wastegate and exhausts that compromised performance during 2014. The Scuderia spent upwards of 4 of their tokens re-designing this area of the powerunit for 2015, replacing the overtly complex wastegate solution, repositioning the turbine inlet(s) and providing a more compact exhaust. Having gathered ground throughout 2014 the team continue to work closely with Shell to further extract power gains through fuel design, with both perhaps a little naïve to the gains that could be had, changing from naturally aspirated V8 engines to the turbocharged V6 powerunits.

Perhaps one of the key areas that Ferrari have made strides is with the SF15-T's cooling package, which not only assists the progression made with the powerunit but comes with some aerodynamic advantages too. Ferrari have retained the air-liquid-air cooler which is sandwiched between the powerunits V whilst radiators are placed in the each sidepod. The innovative radiator layout not only sees the team orienting the radiators differently but using flow conditioning components to increase efficiency.  I've illustrated the radiator layout on the image above with the radiator in blue and conditioning devices in green and yellow.

Rather than just being rotated around one axis the Scuderia have done so around two, with the radiator shaped to follow the curvature of the sidepods outer wall and elongated to maximise its aspect ratio. The elements placed in the sidepods inlet (green) are shaped like airfoils and further increase efficiency, as they condition the airflow to the full surface area of the radiator.  Meanwhile, the tray mounted above the radiator (yellow) captures the airflow passing through the radiator and reworks it along its upper surface, further maximising radiator performance.  Several ducts reside along the trays length and release airflow in a more controlled manner into the sidepods internal airflow volume.  Internal airflow can have a dramatic effect on the performance of the car, treating the airflow in the way Ferrari is allows the team to reduce the cars thermal footprint.  This means that the team have thus far only had to make very minor bodywork amendments to the cooling outlets, even at some of the hotter races so far this season.  The net result is an increase in aerodynamic performance, as opening up the rear of the car for cooling creates unwanted drag and disturbs the performance of key downforce generating devices.

As we have seen over these last few articles there is no silver bullet to the new found performance of Ferrari, rather it's several measured steps in the right direction.  However, the battle isn't won just yet, they still need to find more performance to take the fight directly to Mercedes.  Whilst continuing the progression we have already seen, to keep the likes of Williams and Red Bull at bay.