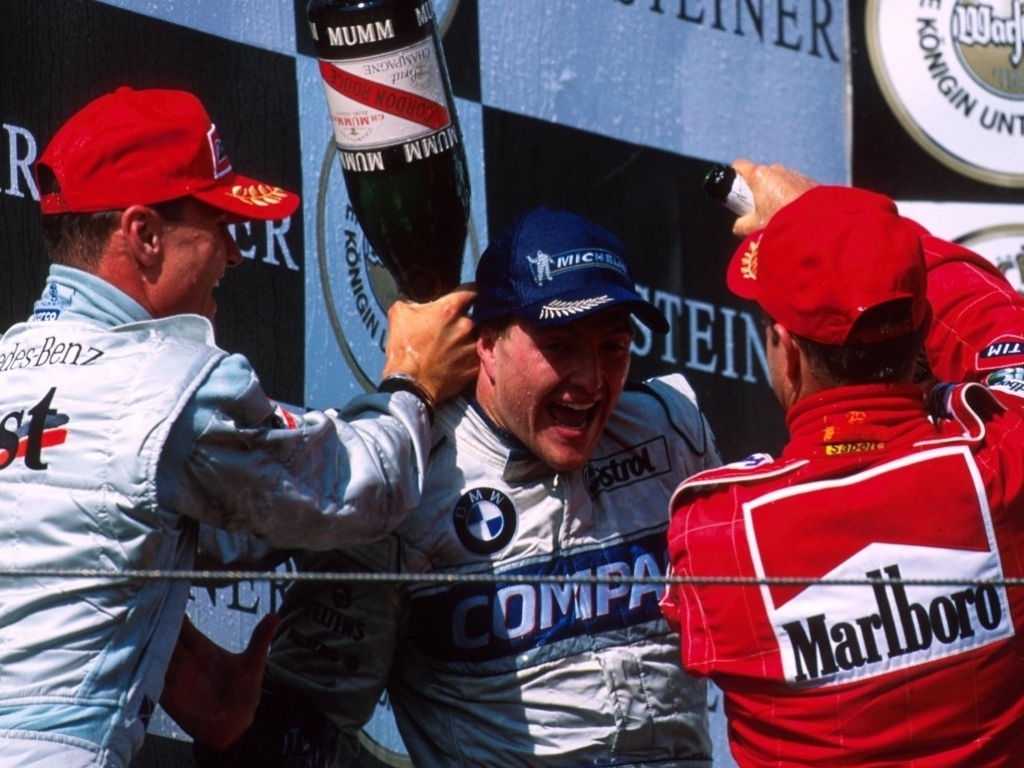 9 April
1995
Argentina returns to the F1 calendar for the first time since 1981 with the Autodromo Oscar Alfredo Galvez staging the race. David Coulthard, in the Williams-Renault, clinched his first pole position in Friday qualifying, but team-mate Damon Hill won the race with Jean Alesi second in the Ferrari and Benetton's Michael Schumacher third.

1971
Jacques Villeneuve is born in Quebec, Canada. He would go on to emulate his father and compete in Formula 1, but he goes one better than Giles as he wins the 1997 Drivers' Championship. Giles' best finish in F1 was second in the 1979 season.

2000
Michael Schumacher's brilliant start to the season continues as he makes it three wins a row with victory at the San Marino Grand Prix despite starting behind McLaren's Mika Hakkinen on the grid.

10 April
2011
Red Bull driver and defending World Champion Sebastian Vettel claims another dominant victory in Malaysia as he takes the chequered flag ahead of McLaren's Jenson Button with Nick Heidfeld third for Renault.

11 April
1955
Mario Alborghetti becomes the fifth recorded Formula 1 fatality as he is killed on his F1 debut at the Pau Grand Prix. Alborghetti seemed to hit the wrong pedal as he came to the bend and crashed into the straw bales. His helmet was torn off on impact and he suffered fatal head and chest injuries.

1993
Donington Park hosts its first and only Formula 1 race as it stages the European Grand Prix. After dropping to fifth at the start, Ayrton Senna overtook four cars in quick succession in wet conditions to take the lead. He went on to win the race ahead of Williams pair Damon Hill and Alain Prost, lapping all cars except Hill. Senna stopped four times as conditions changed continuously while Prost stopped a record seven times. Senna also recorded the fastest lap, which was the 19th and final one of his career.

1999
McLaren's Mika Hakkinen takes his first win of the season as he bounces back from his Australian GP retirement to win the Brazilian GP ahead of his Ferrari nemesis Michael Schumacher with Heinz-Harald Frentzen third for Jordan. Only nine drivers of the 22 drivers see the chequered flag.

2012
Susie Wolff is named development and test driver for the Williams team, but she has to wait two years before she finally gets a taste of official action as she only made her FP1 debut at the 2014 British Grand Prix.

1987
The season gets underway with the Brazilian GP at the Jacarepagua Circuit in Rio de Janeiro. Nelson Piquet got local hopes up when he qualified in pole position for Williams, but he has to settle for second behind McLaren's Alain Prost on race day.

2013
Ma Qing Hua makes history at Shanghai as he replaces Charles Pic in the Caterham to become the first Chinese driver to participate in his home race weekend. His previous FP1 outings were with HRT in 2012.

13 April
1986
The European leg of the 1986 season kicks off with the Spanish Grand Prix, the first Spanish GP since 1981, at Jerez. Ayrton Senna (Lotus) gets the better of Nigel Mansell (Williams) and World Champion Alain Prost (McLaren) for the win. Senna finished just 0.014s ahead of Mansell in one of the closest finishes in F1. Only eight cars made it to the end of the race.

1997
Williams' Villeneuve claims his sixth career win as he takes the chequered flag at the Argentine Grand Prix, the 600th GP in F1 history. Ferrari's Eddie Irvine was second, which was the best finish of his career, with Ralf Schumacher in third, his first podium, for Jordan. Ralf was also the youngest ever driver on the podium at the time.

2013
Mark Webber qualifies 14th fastest for the Chinese GP, but the Red Bull driver is sent to the back of the grid after running out of fuel in qualifying, meaning he was unable to give a mandatory petrol sample to stewards.

14 April
2002
Ferrari claim their first 1-2 finish at the San Marino Grand Prix as Michael Schumacher beats Rubens Barrichello by 17s with Ralf Schumacher third for Williams-BMW. It was Michael's third win in four races in 2002 with Ralf winning the other race.

2012
Nico Rosberg claims the first pole position of his 111-race career as he comfortably beats McLaren's Lewis Hamilton to P1 in qualifying for the Chinese Grand Prix. It was also Mercedes' first pole since they returned to the sport as a constructor in 2010.

2013
Fernando Alonso wins the Chinese Grand Prix ahead of Kimi Raikkonen in the Lotus and Merc's Lewis Hamilton. The Spaniard finished more than 10s ahead of Raikkonen to secure his 31st grand prix victory on his 200th grand prix start. It was also Alonso's first win since the German GP in 2012.

15 April
2001
Ralf Schumacher comes from third on the grid at the San Marino Grand Prix to claim his maiden victory ahead of pole-sitter David Coulthard from McLaren and Ferrari's Rubens Barrichello. With brother Michael Schumacher already a multiple winner, it was the first time that two brothers had tasted success in F1. It was also Williams' first win since Jacques Villeneuve won the 1997 Luxembourg Grand Prix.

2007
Ferrari driver Felipe Massa wins from lights to flag at the Bahrain Grand Prix, taking the coveted hat-trick in the process, with rookie Lewis Hamilton second for McLaren and Kimi Raikkonen third in the other Ferrari. Hamilton became the first driver in F1 history to finish on the podium in each of his first three races. His run would continue until the British GP in July.

2009
The FIA International Court of Appeal declares the double-decker diffusers used by Brawn GP, Toyota and Williams legal, dealing a big blow to their rivals. The three teams stole a march on everyone else early in the season due to the invention. Brawn GP won seven of the first eight races.

2012
Nico Rosberg becomes the 103rd person to win a grand prix as he breaks his duck at the 2012 Chinese Grand Prix. The win was also Mercedes' first as a constructor since Juan Manuel Fangio won the 1955 Italian Grand Prix. The McLaren duo of Jenson Button and Lewis Hamilton completed the podium.