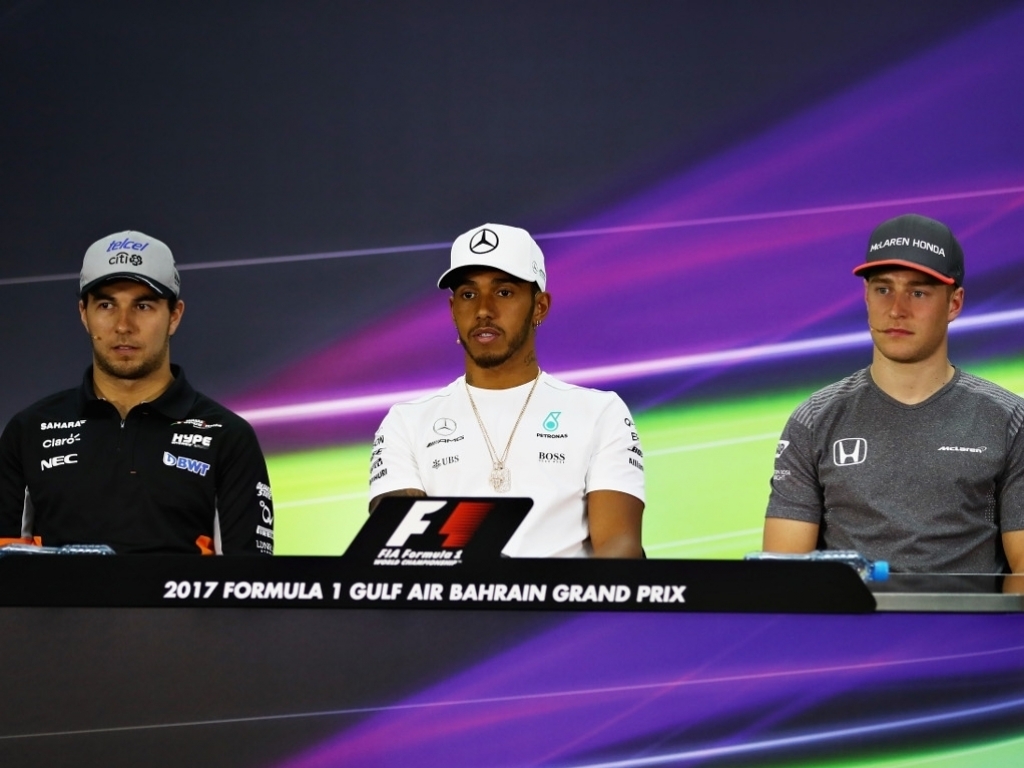 Q: Lewis, great win last time out in China, current joint leader of the FIA Formula One World Championship – so far so good?

Lewis HAMILTON: So far, so good, yeah. Happy to be back in Bahrain; always amazing weather. Yeah, it’s been an awesome season so far. We’re working very hard collectively as a team to try and continue at that level.

Q: Just following up on some comments after the last race, obviously you are a two-time winner here in Bahrain but given the circuit layout here, and particularly the higher temperatures, which could possible play to Ferrari’s strengths are your expecting an even tougher battle to keep them behind you this weekend?

LH: I definitely do. I think Ferrari have shown tremendous pace and I think obviously in the first race, particularly in race trim, they’re very, very quick, particularly on the hotter circuit. So, being that it is a hotter race here I think the gap is going to be even closer, if not different that to perhaps it was before, but we shall see.

Q: Obviously, yesterday Fernando Alonso announced he’s going to race at Indy next month, in the Indianapolis 500. As a motor sport fan yourself, as well as an old rival of Fernando’s, what do you think of him skipping Monaco for Indy?

LH: I think, firstly, it’s great that a driver is able to do that. I think us drivers should be able to do more than one series. Obviously there was a period of time in the past when there were drivers doing multiples series, so I think it’s pretty cool that he’s doing it. And I hope that Jenson comes back, I think it would be great for the sport to have Jenson back in.

Q: Thanks for that. Stoffel, coming to you, you obviously made your Formula One race debut here 12 months ago with a points-scoring finish. It’s been a pretty tough first couple of races for you, but what have you taken from them to make you stronger going forward?

Stoffel VANDOORNE: Yeah, it’s great to be back in Bahrain. I obviously had a good race here last year, which was nice to get that opportunity. A year on, I think it’s a lot different; I’ve now got two races under my belt and a bit more experience. It’s not been an easy situation for us at the moment but I feel in a good position and hopefully this weekend we can prove again that we made a step forward.

Q: Clearly very tough for you to have that lack of performance from the McLaren-Honda package at the moment. When do you expect a step change and how have you revised your expectations for the season?

SV: It’s difficult really to put any timeframe on it, when it will get better. Obviously we are all hoping it’s gets better sooner rather than later, I don’t know exactly when we will see a step in performance.

Q: Thanks for that. Sergio, you finished on the podium here in 2014 and you have a 100 per cent finishing record at this track, so is it one of your favourites?

Sergio PÉREZ: Yeah, I think it’s one of my favourites. I’ve had good races here in the past, certainly the podium the year before. This track suits my style quite well, so hopefully we can have a good finish, close the gap to the cars ahead, especially now that the midfield is so packed and we are probably a little bit behind in that group but hopefully we can keep scoring good points on Sundays.

Q: Let’s drill down into that a little bit, about the midfield. The team has bagged two double points finishes in a row, but give us an insight into just how tight that midfield battle is and what kind of things make a difference to getting a good result in that battle?

Q: (Frédéric Ferret – L’Equipe) A question for Lewis. You said you love the weather. How have you been working to deal with the heat for Sunday’s race?

Q: (Graham Harris – Motorsport Monday/Motorsportweek.com) A question for all three drivers: with Fernando announcing that he is doing the Indy 500, would any of you like to do the Indy 500 or possibly another iconic race like Le Mans if you were offered?

SV: Yeah, I think I’ve decided to do the Spa 24 Hours instead of Hungary this year!

LH: I wouldn’t miss out any of the races in Formula One. I’d definitely continue to do all the races, but I’d like to do MotoGP. I’d like to ride a MotoGP. Is there another race? Probably a NASCAR race, like the Daytona 500 maybe.

Q: (Simon Lazenby – Sky Sports) A question for Lewis. I know it’s early days but how does it compare, fighting a four-time world champion at another team as opposed to fighting your own team-mate in the same car? Does it excite you more this year if you were to take it a relative stage as last year say?

LH: I’ve commented on that same question a couple of times in the last two races but yeah, it is more exciting racing another team, very much like I experience in 2007 and 2008. Also, growing up seeing races with McLaren and Ferrari, the great teams that were at the top competing with each other was always exciting. So to be in amongst the fight with the Silver Arrows and Ferrari, which is also a very historic, great team, I think it’s more exciting than just silver at the front.

Q: (Louis Dekker – NOS.nl) A question for all three drivers. This is a back-to-back race. Can you explain a little bit not how heavy it is for you as drivers but for the team, logistically, physically, mentally?

SP: Yeah, it’s very hard for our guys. They have such a hard time, the mechanics, they come here very early in the morning and they leave very late at night, pretty much every day, they are coming here since Tuesday, so it’s very hard for the mechanics. I think for us as drivers, it’s not that hard. It’s another race and we have plenty of time to rest. But especially everyone who is involved in the team they have a very hard time. Having two races back-to-back is pretty much the limit, if week have a third one it would be very hard for all the boys in the team.

LH: Yeah, I think for the drivers it’s easier doing back-to-backs. Could be back, weekend on, weekend off. Just keeping weekend in, weekend in, I think would be easier for us because staying in the zone between races, it’s just easier that way. When you have the gap you have to switch back into it, so it’s a little bit trickier. But for the team it definitely is very, very tough. It’s time away from the family; they’re on their feet for long, long hours during the day. But in all honesty, a lot of the guys, particularly my guys, they love it. There’s nowhere in the world they’d rather be. So whilst it is very tough for them, for sure, and they definitely feel it, it’s great to see that enthusiasm, and that sheer drive to just keep doing something you love. So, I never, ever see them complain, ever.

SV: I think they pretty much covered everything.

Q: (Dieter Rencken – Racing Lines) Lewis, when you are racing your team-mate, regardless of who it is, you both have very similar characteristics, similar strengths, weaknesses, you have data. When you are racing someone in a different car, the Ferrari for example, that car has different characteristics, you don’t have data. Which is more difficult to do?

LH: Ah, I think it’s more difficult for sure racing up against… I wouldn’t say there’s one more difficult than the other, they’re just different. When you’re racing up against another team there are strengths and weaknesses. You know last week when we were qualifying against the Ferrari they looked like they were going to get pole but we were finding a bit more time on the track, in the blind really, because at the time I was the quickest of the two guys in our garage, so I was having to base myself on myself, I couldn’t base myself on Sebastian. Definitely having to push the boundaries on your own is more of a challenge, which I love. When you are comparing data and you are constantly pushing each other, it’s OK, but it’s not as much fun as competing against an unknown.

Q: (Livio Oricchio – Globosport.com) I’m sorry to come back to the same subject. If you were going to race in the Indy 500, what would be the biggest challenge, considering the average speed you have, the cars are most of the time very close, you have a wall at your side? What would be the main lesson should be important to race there?

LH: It’s a completely different category; it’s a lot, lot different. I’ve never driven one of those tracks, but it would so much different for us to go and do that – how a car’s set up, because it’s asymmetric I think, I believe the set-ups are asymmetric. The banking, how much you lift, how you use the tyres. It takes us guys forever through these test days to learn how to operate these tyres in the right window, so I would imaging it’s not an easy thing to do in one go, so it’s definitely a tall order in a short space of time, but Jeez, you’ve got one of the best drivers in the world going there, For sure, he will be the best driver in the paddock, but he won’t have the experience any of them have. So I think it will be a very exciting challenge for him, to see how strong he can fare against those who have all that experience.

Q: What do you think Stoffel? You’ve obviously watched a few of these races. What’s the biggest thing you would be wanting to understand straight away?

SV: I think it’s a very strategic race. We’ve seen last year Alex Rossi winning the race and doing huge amounts of fuel saving. I think anything is possible. Fernando is a clever guy. He knows what he is doing. Hopefully he comes back with a trophy. I’ll give him a bottle of milk as well.

Q: Have you spoken to him about it?

SV: Only a little bit at the moment, but I’m sure I’ll catch up with him over the weekend.

Q: And what about you Sergio? What would you be thinking about on your first runs around the Speedway?

SP: Yes, as these guys say, there’s so much to learn from a completely new series. I mean we have been doing this for many years and through the lower series as well, which is something more similar to what we do now, so going to a completely new tyre, new characteristics, new ways of setting up the car, circuits, driving in the traffic. But I think with Fernando that’s probably one of his strengths, how he can manage the race situations, so he’ll be really good on that. Indy really depends on the last 10 laps, so I think he wqill be really good at it.

Q: (Phil Duncan – PA) Lewis, you said you’d like to see JB back in the car for Monaco. Can you just elaborate on why you’d want to see him there? And Stoffel, is JB the man you’d like to see back at McLaren replacing Fernando in Monte Carlo?

LH: Because I like Jenson and I think he’s still one of the best drivers and his calibre is still higher than any other driver that’s going to be able to take that spot for sure.

Q: And experience is important in Monaco?

LH: Yeah, his calibre and his experience for sure.