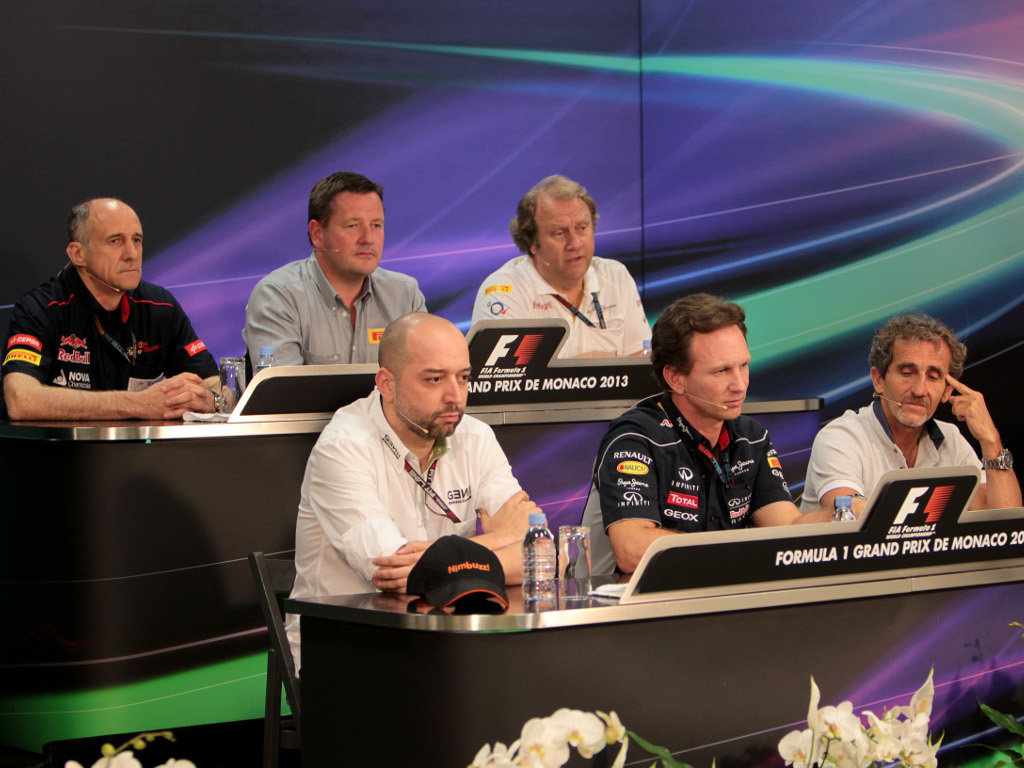 Q.Alain, it’s been a while since we last saw you in an FIA press conference, welcome. Explain a little bit about your role with Renault Sport?

Alain PROST: Well, my role is mainly is an ambassador for Renault, the brand Renault, since last year. Even if I have done many things with Renault in the last few years, for different things. Also this year I’m advisor for the strategy, being part of the executive committee.

Q.In terms of 2014, how far advanced is Renault’s programme?

AP: Everything goes well. The engine should run in June on the dyno, the final version. But everything is belonging to the programme.

Q.And when do you think that Renault Sport will be finalising its teams for 2014?

AP: I’m not myself negotiating with the teams but we all know that it’s going to be accelerating during this weekend. I don’t know. I cannot say all the dates for all the teams but I hope very quickly.

Q.Paul, if I could turn to you next. An awful lot of debate and opinion in Formula One at the moment regarding the Pirelli tyres this year, some pro, some anti. What is your opinion on the way that the Pirelli tyres are influencing the racing, and also what changes will we see to the tyres from Canada onwards?

Paul HEMBERY: Well, obviously there’s a lot of different opinion, quite divided, among fans, commentators, teams and you’re never going to please everyone. That’s one of the challenges you have but from our point of view it’s the same for everybody, they have exactly the same tyres to work with and somebody’s going to end up winning on a Sunday. From Canada? Well, we’re still finalising the ultimate details for Canada. We’re trying to minimise the changes, for sporting equity reasons of course. We want to resolve the delaminations that we’ve seen, that have occurred when we’ve picked up debris. That, from a tyre maker of course is something that we’ve wanted to solve. It doesn’t look good. The tyres have stayed inflated but it still doesn’t look good from an image point of view. So that’s where we’re at. We’re trying to finalise that, working with the teams. We’ve had good collaboration. Of course, some people might want something different and again you’re not going to please everybody but we have to do what’s correct for the sport and what’s correct for Pirelli.

Q.While we’re talking tyres I think it would be nice to get the reaction of the team principals and chairmen here on the panel. Christian, can I start with you. What’s your opinion on the Pirelli tyres and the racing this year?

Christian HORNER: I think we’ve been pretty consistent throughout the year really. The tyres, on occasion, have been a bit too marginal. That includes races we’ve won at in Malaysia and Bahrain. I think it’s good that Pirelli are looking at it. I think the most important and most fundamental thing is from a safety perspective, if you do have a delamination, if you have a big chunk of rubber, you don’t want that to hit a car component or worst case a driver. So, there are safety issues that I know some of the drivers are concerned about. Hopefully, Pirelli are a very capable company. I think they know what they need to do and hopefully that can be resolved very quickly.

Q.Gerard, is that an opinion your share – that the tyres have been too marginal this year?

Gerard LOPEZ: Yeah, we’ve echoed the safety issues and said that whatever needs to be done on safety grounds is obviously fine with us, we’re not going to go against that. As far as the tyres being marginal goes, we’ve found them to be quite consistent. But then again – different cars, different drivers, different styles… they work for us. So we’re actually quite happy with the way they are.

Q.Franz, what about you and Toro Rosso?

Franz TOST: I think the problems started in testing, because in February it was very cold when we were out the first time this year and if I remember only Jerez was an acceptable test but otherwise in Barcelona it was quite cold. There we couldn’t do a proper test for the tyres. I think if we had tested in a warmer country some of the problems we observe now could have been sorted out. Therefore, I hope that in future we will do these tests under other conditions, under conditions under which we are racing and then I think Pirelli immediately will react and will come up with a proper solution. So far we at Toro Rosso haven’t faced bigger problems.

Q.Finally to you Bob. From a deputy team principal’s perspective: safety, racing, what’s your opinion:

Bob FEARNLEY: I think Pirelli have done a good job. Fundamentally we’re looking to try to average out at two to three stops per race and I think if you take the extremes in any 20-race series you’re going to have some that might do four and some that might do one. But overall were going to achieve the objective. I agree with Paul, it’s the same for everybody. I think some of the teams will have put in resource perhaps this time year to start looking at how they’re going to develop their car, what suspension programme they’re going to put in to optimise the tyres, other teams will continued to work on aero. That’s the choice of the teams at the end of the day and you’ve got to deliver what you think is the most competitive package. But there are four points of contact on a track, it doesn’t matter how much else you do, you’ve got to make the tyres work.

Q.Alain, I’m sure you’ve been watching the racing quite intently. Has the sport got the right balance at the moment between exciting racing or tyres dominating too much?

AP: I think in the past and very recently it’s been very [much] criticised for not having a show or indecision. We should [feel] very lucky that we have these kind of races. In the last few years, we have the decision only in the last grand prix. Obviously, also think about next year when we have the new engine coming we will talk maybe a little bit more about the engine, the technology, about being much closer to the product of the automotive industry. But we still need to keep the show also. We need to keep the indecision so it’s going to be even better balanced but at the moment I wouldn’t criticize what we have today.

Q.If I could move on and turn to you, Franz. Both of your drivers in their second year with Toro Rosso this season. What improvements are you seeing from Jean-Eric Vergne and Daniel Ricciardo and as drivers who have been part of the Red Bull driver programme, do you see something in either of them that suggests that they could move up to the senior team?