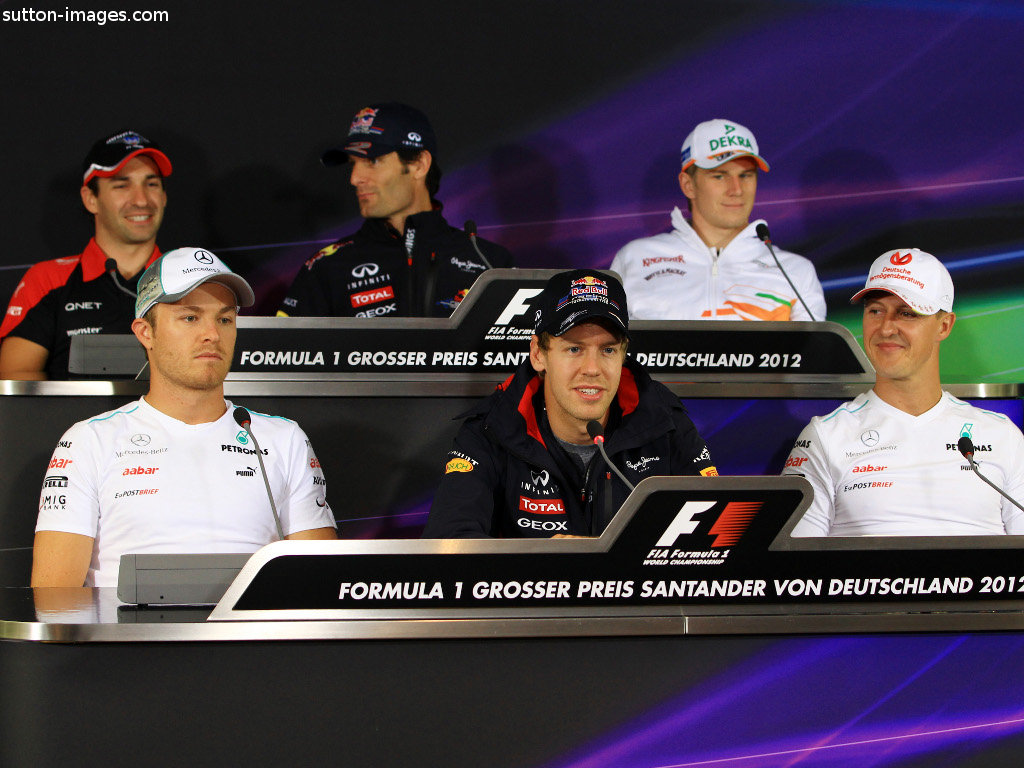 Q: Nico Hulkenberg, starting with you, but it’s a question for all the German drivers – you best memories of Hockenheim. Doesn’t matter whether it’s a Formula One memory or any other series or even just spectating.
Nico HULKENBERG: Well, actually my first ever formula car race was here, in 2005, with Formula BMW, the opener here at Hockenheim and luckily I won the first race right away, so great memories for me here. I race in Formula BMW quite a lot, in Formula 3, 2010 and Formula One. It’s a placing I’ve been racing at a lot and I really enjoy being here.

Q: Timo, your best memory here.
Timo GLOCK: Definitely in 2006 when I won the GP2 race. On the last lap I think I overtook the leader and won the race, so I think that was the best one. Not the best memory was 2008 when I finished the race in the wall in the last corner and had to go to hospital, so up and down.

Q: Nico?
Nico ROSBERG: Yeah, it’s very special to come here. As Nico said also I’ve been here so many times, testing in the winter and in the summer, testing all the time and driving in so many races. And now coming here as a Silver Arrows driver, which wasn’t really the case two years ago, it’s great. A lot of friends and family coming and I really enjoy the track and I have high hopes of doing a top result here.

NR: For example, winning the, no… I think was already BMW champion at the time but winning the last two races was a great memory for example.

Q: Sebastian, major memories? Were you a spectator here?
Sebastian VETTEL: Yeah, I remember the first time I came here was with my father in I think 1992. I was five years old and we came on a Friday, it was raining like crazy, on the old track. We were for the cars to come, for Michael to come, but they only did the installation lap but that was already enough because just to hear the cars, the sound, see them, see the spray was unique. So that’s a nice memory. A couple of years later I watched again a Formula One Grand Prix, from the main grandstand and it was very hot. I remember they sold water for 10 Deutsche Marks, which was really expensive at the time and later on when we left we found out that they had just refilled the water bottles from the tap, so that was quite a good business. After that, through Formula BMW and Formula 3, similar to the two Nicos, a lot of racing here. It’s not far away from where I was born, where I grew up, therefore it’s obviously special to come here.

Q: Michael, three wins here, what are your greatest memories?
Michael SCHUMACHER: I guess it’s the first one, in 1995, when I stopped at some part of track, because I think I stalled the engine and I got towed back to the pits, which was, in a way, nice because you have lots of time to enjoy the atmosphere, all the fans, the appreciation… I mean they had to wait for such a long time, although in 1994 we already had a race-winning car, but then retired. So yeah, in ’95 a German finally won a German race.

Q: Nico, back to you. Vijay Mallya says the team needs more luck. What do you feel is required within the team now – you’re scoring points on a regular basis now?

NH: You always need luck, of course. You also need pace and speed and you know you need to be competitive, especially in a midfield that is very tight and very difficult. We see each Saturday and Sunday that one or two tenths can make a big difference and our main rivals have scored some big results, a lot of points. So now we really have to dig deep, keep our heads down to be within reach and keep the momentum up.

Q: Mark, after 99 grands prix with Red Bull Racing, you’ve re-signed with the team. What does that mean to you to re-sign for them next year.
Mark WEBBER: Yeah, it’s been a long relationship and yeah we’re going to be working together again next year, which is very exciting, to continue the challenge to stay at the front. This year’s obviously going pretty well and there’s a big reason to keep the focus on for that as well but the continuation of that moving on to next year is also helpful.

Q: Looking at the last couple of grands prix, Red Bull Racing have been very competitive, you obviously won the last one. How important do you think the Valencia update was and to have it in Valencia rather than introduce it as Silverstone?

MW Well, it’s two different venue and two different temperatures, so it was important for us to get those parts to the track in Valencia to validate a few things and give us a direction. Yeah, it’s always nice when you get them a race earlier rather than later as you just learn so much earlier. I think ultimately it was a good decision. Very difficult to get the equipment to the track but the boys did a great job and Valencia was the first step to understanding some new stuff with the RB8. But, as we’ve seen, it’s very, very tight, you need to pull everything together to win and yeah, we want to be at the front again this weekend.

Q: Timo, obviously Marussia’s development has been very difficult over the last few weeks – but how much optimism did you get from the update at Silverstone and how is that going to play out in these next two grands prix?

TG: I hope we just have more stable conditions here to learn more about it. It was quite difficult for us to see really what the update gave us – but it definitely felt better in the race, the pace was quite good, so I’m looking forward to a good weekend here, we have some little parts again which should give us a little gain but it’s difficult if everyone else makes at the same time, at the same race, an update, or brings an update, then sometimes it’s a bit difficult to see the step. But the car did improve and in the next couple of races we should have a couple more bits and pieces coming.

Q: Nico Rosberg, after a very good start to the season things seem to have gone off the boil a little bit, how can you turn that around?

NR: I don’t think that’s quite right – it’s just that we haven’t maximised what we had in the last few races and that then eventually finished with the race in Silverstone where yes, the track didn’t really suit our car. So, it’s maybe not quite the right picture: I still think we have a good car and I still think if conditions suit us and we get a grip on the tyres – like at the track for example, here in Hockenheim , which should suit our car a lot better, I think we should be able to do a much better result.

Q: So you’ll be turning it around here?

Q: Sebastian, a very strange statistic that someone’s come up with: you’ve never won in July – and yet you really want