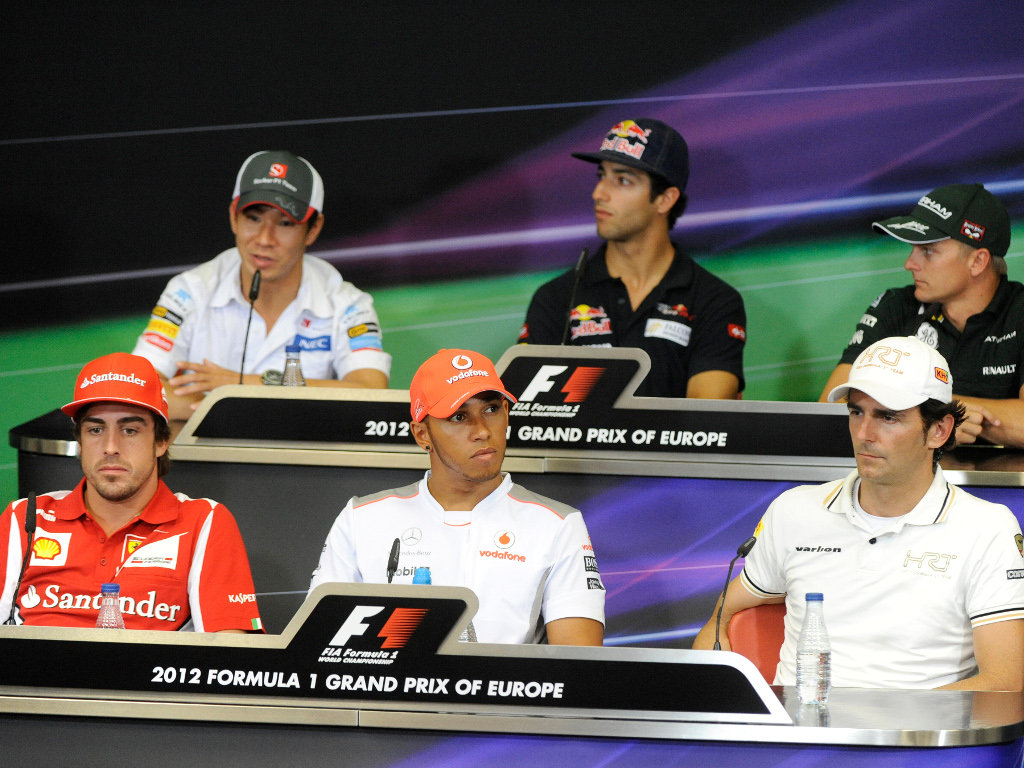 Q: Heikki, you made some comments in your preview that this isn’t your favourite circuit: brake cooling so important here and the track evolves more than others. Perhaps you’d like to expand on those comments?
Heikki KOVALAINEN: Good afternoon everyone. Yes, I read that preview and I think our press officer Tom Webb had something to do with that. It doesn’t mean I hate the place. I mean look at the weather, look at the circuit. Everything here is actually very, very good here. I’ve had pretty good races in the past here. I was on the front row with McLaren in 2009, so there’s nothing negative for me to day about that. That’s all I can say really. I look forward to a good race. It is a street circuit but not as hardcore as Monaco or Montreal. It’s easier, the kerbs are easier. It’s slightly smoother, we can run the car very low. It’s very, very smooth. I think if you just find a good set-up on Friday and Saturday morning I think it’s really good fun to drive. In terms of competitiveness, whether we’ll be closer to the cars ahead of us or not, it’s hard to say yet. We need to wait and see where we are. But I’ll definitely look forward to a good weekend. I think everyone here will have a good weekend, the weather looks fantastic.

Q: Just looking overall at the performance so far, over the seven races we’ve had so far, how do you feel the team is progressing: definitely getting closer to the teams in front?

HK: I think it’s fair to say that we were hoping to start the season closer to the cars in front of us. Obviously at the winter testing, we thought we were closer but then we arrived at the first few races we were not as close as we thought. But since then the team has made a lot of effort and in my opinion in all the right areas. I’m very happy to see that. I think we are making good progress. Obviously John Iley from McLaren has joined us very recently and I think in the next few races we’ll see updates coming every race. For us they feel like quite significant updates but I think we need to wait and see how they translate onto circuits, actually on to the racetracks before really making too many predictions. The main point being that the team had grown a lot since last year and since the beginning of the year I think we have focused absolutely on the right areas to make that relative gain to the teams ahead of us. Whether we can do it or not, really on track, I think we need to wait and see. I think we can do it and I’m looking forward towards the end of the season more regularly beating the cars ahead of us.

Q: Dan, it’s virtually a full year for you in Formula One now, are you pretty much where you want to be?
Daniel RICCIARDO: Good day everyone. It’s gone very quick. Someone, probably my dad, told me very recently that it’s nearly been a year that I’ve been here. I remember Silverstone like it was a week ago. Time goes very fast. You have to try and take advantage of every opportunity and make the most of everything so… I’ve had some good times in the first year and some times I wish were better but generally I’m enjoying it. It’s a huge experience and a great learning curve for me but after a year it’s time to kick on and get some solid results. As for this season we’ve been a bit up and down. We kicked it off pretty well in Melbourne and we probably would have liked that to continue, which it hasn’t done as smoothly, but yeah, we still have a long season ahead of us. The experience is growing now and I think it’s time now to try to get a few more points on the board and to turn a few heads would be nice.

Q: Of course you’ll know all the circuits from now on – apart from American, which no one will know – so how important is that? You haven’t raced here but you were here as a Friday driver last year.

DR: Yeah, I think it helps a bit. Once you get to this level you can pick up a new circuit fairly quickly but I guess if it’s one you’ve driven on over and over you tend to know a few more secrets about it. But, having FP1 here last year will get me into the groove of things a bit quicker but you know come Saturday and qualifying I think everyone’s pretty much into it whether it’s a new circuit or one we’ve been to before. There are some special circuits on the calendar, maybe Monaco for example, where the more experience you have there the quicker you’ll eventually be able to go, knowing a few more little secrets; knowing which lines to take. But generally I don’t think it changes much now. Looking forward to a stronger second half of the season and hopefully that can start here. It’s nice and warm, a bit like home – though I haven’t really been living at home much in the past six years or something, so maybe it will take me a little bit of time to get used to the heat again, but yeah, looking forward to it.

Q: Kamui, first of all, the Sauber seems to be suited in certain areas and not in others, but what about this circuit?
Kamui KOBAYASHI: Here I think pretty OK. Only we have to focus on working the tyre with this track temperature because this is quite… extremely high. I think the car itself is OK for this track but difficult to say how it will perform on the track in this temperature.

Is it still about tyre management. Your team-mate for example is always cited as someone who will make a one-stop, just as he did here last year. How does that affect you?

KK: I think in the last race Sergio did a really great job with the tyre management. But I think this season so far, it’s very important to be [in] clear air. If we are in traffic we damage the tyre of course. It’s not only the tyre management, we have to be clear. It’s not only the driving, it’s the situation as well. It’s difficult to say that it’s coming only from the tyre and the driving, it’s all a mixture. Let’s say Sergio last race had great driving but he also had quite a lot of time with not so much traffic and that’s the key to managing the tyre. Also last race I think everybody expected in the race to do two-stop but actually one-stop is quicker. But at the same time it seems to be difficult to overtake again because everybody is like a train. So that was mis-predicted for the last race. For my situation I had to change strategy during the race, which is quite difficult. But I think the team did a great job for the performance and they gave us really great advice and we see a good step from the car and we try to understand more the tyre because with this track temperature it’s difficult to see but with there experience I think we can sort it out.

Q: Fernando, we read that you team-mate, part of his resurgence is because of a different set-up and he’s gone his own way on set-up. How does that affect you? Is it an advantage for you?