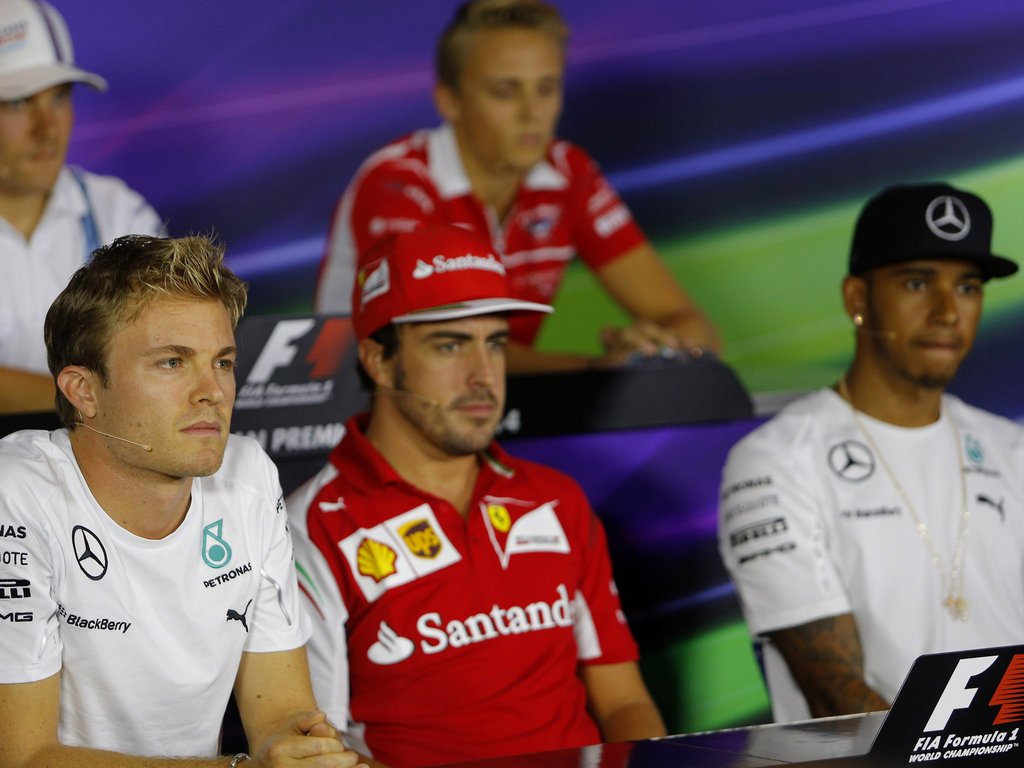 Q: Fernando, can we start with you? Twice a winner here obviously, on the podium here in Monza for the past four years, but the podium count is down a little bit this year, just the two so far. Do you see signs, though, of encouragement from the performance in Spa?

Fernando ALONSO: Well, definitely I think it’s one of the most important races for us in the year, here in front of our tifosi, and we would like to give them some good results on Sunday. I’ve been extremely lucky to have been on the podium in the last four years and hopefully I can repeat that good feeling. It’s going to be difficult. On paper it should be one of the toughest for us. But as you said, I think we saw some signs of being a little bit more competitive in Hungary and we were nearly on the podium in Spa as well with Kimi, so hopefully we can have that opportunity and as I said, being on this podium is something special.

Q: You had quite a battle with Kevin (at Spa) and obviously he was penalised afterwards and we’ll hear from him in a moment, but can you describe the battle from your perspective?

FA: Obviously, you know, we try always to fight and overtake. More than 30 laps behind Kevin in Spa and it was not easy to overtake. I had one chance with some cars in front of us and I took that opportunity and at the end I went a little bit on the grass. The race direction decided to penalise him at the end. We gained that position; we lost a couple more because of that fight but when you are fighting for sixth or seventh at the end of the race it’s not a big deal.

Q: Kevin, obviously you were hit with a penalty after that. Give us your perspective in the battle with Fernando.

Kevin MAGNUSSEN: Well, obviously I did my best to fight for sixth position. For us that was a really good result or would have been – sixth. In the end I went over the line and got a penalty. I guess that’s just something you learn from as well, it’s all good experience and I can always say I did my best. I enjoyed it as well. Hopefully, we can have another good strong race here.

Q: Without that penalty you would have had a sixth points finish in seven races. Are you getting any signs of encouragement from the team that this is the kind of form that will keep you in this seat next year?

Q: Well, obviously another duel that had everyone talking in Spa was the Mercedes battle at the start of the race. Nico, we’ve all seen the statement from the team and other things you’ve said since, but what persuaded you that you had something to apologise for because when we spoke after the race in Spa you weren’t sure?

Nico ROSBERG: Just with time. I took the week to think about it and had a look at it and discussed with the team on Friday and I just in the end decided that it was me who should take responsibility for it.

Q: So, Lewis, in your mind, is it a racing incident? Is that how would put it in your mind now?

Lewis HAMILTON: There was nothing in my mind. I think this is the first time that we’ve been in the room for a long time that there have been so many people here. For me, I’m really excited about moving forward, I feel energetic, I had a good couple of days break last week, so excited to be here, this is one of my favourite circuits so I hope that we can have a good weekend.

Q: And how do you move forward? Have you found a baseline, if you like, of trust and understanding to encourage you to believe that you guys can work together from here?

LH: I knew you were going to say that! I think I already said everything in the press release. Trust is a big word and it’s not something I would particularly apply to racing on the track. Naturally, me and Nico have been racing for a long time and I think we have set a good foundation a long, long time ago so that’s what we work from.

Q: Nico, coming back to you, this duel is often compared to great duels from the past history of our sport. Are you becoming aware that the two of you are making history this year and do you feel the responsibility of that?

NR: Yes, definitely, yes. And in Spa, definitely I was not proud of the way it went because in general I really want to contribute to ‘my sport’ in inverted commas, you know, because I want it to be the most entertaining sport in the world and if I’m able to contribute to that in many ways throughout the season then I’m very happy about that and I’m sure in many we have and that’s great.

Q: And Lewis, just a word from you on that: do you feel the hand of history on your shoulder? Are you aware of the responsibility?

LH: I don’t think I have a responsibility towards history. I mean, history is created every day. I just love racing and I’m proud to be amongst all the drivers here and I’m just trying to enjoy every single day as it comes, you know. Everything becomes history eventually and I personally don’t put us in the same ranking as the greats back in the day.

Q: Thanks for that. Valtteri, coming to you. Another podium in Spa, the fourth for you now this year. You’ve generally been the fastest man throughout this season through the speed traps at a lot of places we’ve visited, so is Monza a potential fifth podium for you?

Valtteri BOTTAS: Well that should be the target. We don’t see any reason why it would be not possible, so we’re aiming for that. We know it’s a good place for us, one of the good ones. We do have good straight-line speed and a special package for here, as I’m sure everyone does. I’m really looking forward to this one and I really think Sunday will be good fun.

Q: Williams wasn’t too far off a win in Austria or Canada. What will it take to get that final push to get you over the line?

VB: I think by pure pace, it is going to be really, really difficult. Mercedes is… any track they are going to be the strongest at the moment. Even Red Bull was surprisingly quick in Spa, so it’s never going to be easy but we are aiming for that and we still need to work on all areas of the car. We already have a good straight-line speed but all areas including, especially the corners, getting more grip into the car is the main thing really. We’re working on that. It’s still a long season to go, so let’s see.Q: Max, you were obviously on pole here in your GP2 days. Is this one of your favourite tracks?

Max CHILTON: Yeah, I think it’s everyone’s favourite or one the favourites of the year. I was on pole here in Formula 3 and GP2. I’m not saying I’m going to be doing that this weekend but I will give it my best shot and will try to extract the most from the car and I just enjoy being here. You only have to do the track walk this morning to see the old banking and it just gives you a good feeling for the weekend.

Q: Can you shed some light on where you and your backers are now with Marussia after what took place in Spa? You said at the time that it was not what everyone thinks it was. So, is it resolved for you now for the rest of this year and what about 2015?

MC: Yeah well there was never really an issue in the first place. It was a busy weekend, I’m not going to lie, but it was a commercial decision that was overturned by senior management over the course of Thursday evening. So, my weekend didn’t really change. I was always out of the car for practice one for Alex, our reserve driver, and so it was nice to be back in the car for free practice two, because Spa is my favourite circuit so we ended up having a good race and a good weekend.

Q: (Ian Parkes – Press Association) To Lewis and Nico. In a TV interview earlier this week that Fernando did, he remarked that both sides of the garage would now be divided – engineers, mechanics, people that know you well would favour one or the other. Do you sense that within the team that you are now a garage divided?

LH: I don’t know if that’s the case. We have a very professional team and yeah I mean they just want to win. So they’ll be working as hard as they can. Also the guys working in the garage work collectively for the pit stops. That thought doesn’t even cross my mind. I think the guys will be working flat out this weekend. They know we have the chance to have one-twos and to win the championship for both the Drivers and the Constructors and I think they will giving it their all.

NR: I general, there has been throughout the whole season a healthy rivalry, within the team also. That is why we are where we are, you know. We have the best car out there, we have the best team at the moment. That’s because we work well together as a team and if you don’t work well together as a team you can’t dominate the sport as we are at the moment so I think that’s the best proof of that.

Q: Fernando you were mentioned there as being quoted. Do you want to qualify your comments or add anything?

FA: No, whatever I say I will always be misinterpreted and always any comment you say after two or three days will be a big thing. I didn’t say exactly that but I cannot change the world.

Q: You don’t want to clarify what you meant.

Q: (Frederic Ferret – L’Equipe) Question to Fernando, could you speak about your early days with Minardi and how difficult was it to begin your Formula One career at the back of the grid and not scoring points and not being visible.

FA: It was tough but it was worse at the end of the year, first year in Renault as test driver. As far as… you are driving, you are on the grid. OK, you are not able to deliver the result that you would like and to fight for the top positions but at least you are racing – which is what you have done for many years in go-karts and different categories. And then, OK, this is Formula One – but you are racing. When you are watching races on the television in the garage, that was very tough.