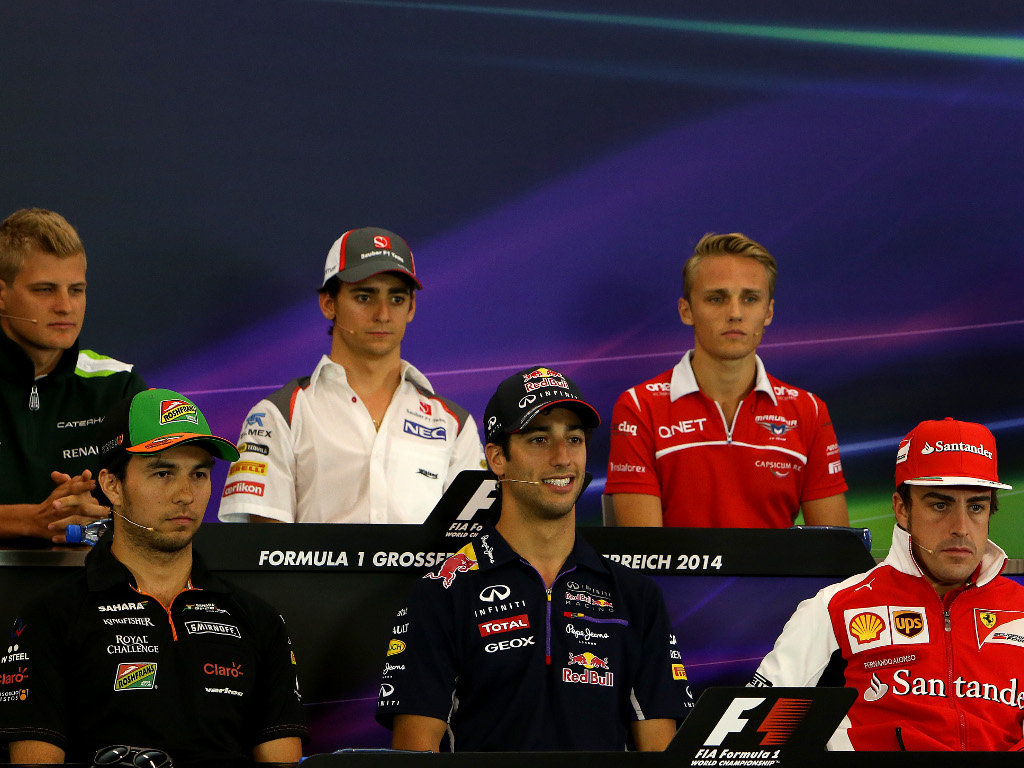 Q: Daniel, can we can start with you? Obviously a winner last time out in Montreal. Has it sunk in yet? How did you celebrate and what kind of messages did you receive?

Daniel RICCIARDO: Yeah it has, it’s sunk in now. It took a few days but yeah it was awesome. We had obviously a great day and a good night with the team; we celebrated and enjoyed the moment. It was nice. I got lots of messages from lots of people, fellow drivers and other sportsmen and people around the world, which is pretty cool. I didn’t see all of them but the amount I saw were really nice.

Q: Obviously this is a big weekend for your team on essentially its home track. What are your thoughts on that and how everyone is prepared?

DR: It’s obviously exciting for us now. We’ve got a bit of steam as well from the last race. I think we’re all really excited – the home one for Red Bull. We’ll see what happens on track. Hopefully we can be strong again but I think as the weekend goes it’s going to be a lot of fun. Not only for us drivers but for the spectators as well. I think they’re going to put on a good show. There’s a few planes flying around today and I think that will continue throughout the weekend with a good show.

Q: Marcus, coming to you. Obviously we’re just over a third of the way through your debut season in Formula One. How do you evaluate your progress?

Marcus ERICSSON: I think it’s going better and better. I think my improvement is good but obviously as a team we want to be performing a bit better. I think I had a really good race in Monaco equalling Caterham’s best ever result, which was really great for me. I think compared to Kamui I’m improving all the time and can compete with him. It’s getting there but of course we need to keep pushing and keep improving all the time.

Q: And how is the morale in the Caterham team at the moment?

ME: I think it’s good. We know that we need to improve of course but everyone in the team is working really hard. Straight away after Montreal I went to the factory in Leafield and everyone there is pushing 100 per cent. We’re going to keep pushing and hopefully turn things around here in Spielberg.

Max, coming to you. Your unbroken run of finishes was ended in Canada with that first-lap accident. How do you feel about that now?

Max CHILTON: Obviously I was hugely disappointed when it happened. It was a typical first-lap accident; two drivers in pretty close proximity. I was pretty upset after the race, losing that, and for the team because there was a lot of damage. But we’ve got to draw a line in the sand and move on from that and I think we’re on a good roll at the moment as a team, we’re definitely pulling away from certain teams and catching others up, so we’ve just got to keep focusing on that now and focus on the future.

Q: As you say the team is in pretty good shape – ninth in the championship with the two points that were scored in Monaco. So where do you go from here?

MC: We’ve just got to keep moving forward. We’re not a top team that can bring huge updates to every race. We just need little and often. We’ve been doing that I think fairly well this year, better than previous years. Just getting a few more points of downforce at each event just makes the car more driveable for me and Jules and that means we can then extract more from the car. It’s amazing what that little difference to the cars around you. I think we’ve been racing cars that we’ve never raced before.

Q: OK, thank you for that? Esteban coming to you. Obviously still no top 10 in qualifying or the race yet this year for your team. However, last year developed pretty well in the second half of the season and picked up results. Do you feel it’s possible to repeat that this year?

Esteban GUTIERREZ: It’s going to be a little bit more challenging. At the moment there is not any quick fix to our situation. It’s not easy to accept and to realise the position we are in but all the team, every mechanic, every engineer, is doing his best to recover. At the moment we are in a position where we are fighting for ourselves. I mean I’m fighting basically with my team-mate and that’s the only reference I can have and that’s the only thing I can show from the driver’s point of view.

Q: I think I’m right in saying that you’ve never raced any kind of car around this circuit. What are your thoughts on the track and how you’ve prepared for this weekend?

EG: I heard very good comments from various drivers that it’s a fun track even though it’s quite simple, so I’m really looking forward to it. At the team we don’t have a simulator, so there’s no real preparation for it, but I’ve seen a lot of footage, some data as well, which I’m able to look at and that’s basically it; not much to do. I’ll do the track walk later on, pretty slow, to really see every detail on track and enjoy the weekend.

Q: Sergio, first of all, how are you feeling after your accident at the end of the Canadian Grand Prix? Any after-effects and have you had any conversations with Felipe Massa since then?

Sergio PEREZ: Yeah, luckily nothing happened. We went straight to hospital; it was a pretty big shunt. I had a little bit of back pain, which went away during the days. I couldn’t do normal training for a couple of days and no, I haven’t had the chance to speak with Felipe.

Q: You were running competitive at the time [of your accident], so what about this track? Is it going to be another weekend that will suit Force India do you think? I understand you’ve got some upgrades coming this weekend as well?

SP: Yeah we have a couple of upgrades, so we are really enthusiastic. I think this can be a good track as well for us. Yeah, we were doing so well in the last race; the strategy was going really well, we managed to do one stop and keep a very competitive pace, so I think we are really enthusiastic. It’s the first really big upgrade we bring to the car since the beginning of the year, so hopefully that will put us in better shape and a better position.

Q: Fernando, you are the only driver on this panel who has raced a Formula One around this circuit before. What do you think about the circuit, what are your memories of your races here from the early 2000s?

Fernando ALONSO: I think the circuit, as Esteban said before, is a very short circuit, so there are only five or six corners around here where you can make the time, so I expect all the cars to be very close. One or two tenths you can make a lot of places, so you just need to make a perfect lap on Saturday. If not it’s a big penalty in terms of positions on the grid here. And to be honest I don’t remember anything. We raced in 2001 and 2003 and I have no memories. Too long!

Q: We spoke in Montreal, obviously Ferrari brought quite a lot of upgrades to the car, which worked quite well in practice, but you weren’t able to use all of them for the whole weekend. What’s the plan for this weekend and what sort of shape do you think you’re going to be in?

FA: We have some new parts also coming here, as every race, and we will try to evaluate them tomorrow in the practice, trying to understand which ones we can put on the car on Saturday and which ones will require more time to bring to the cars. So tomorrow will be as usual a test Friday and hopefully we’ll pick out the good ones for the rest of the weekend.