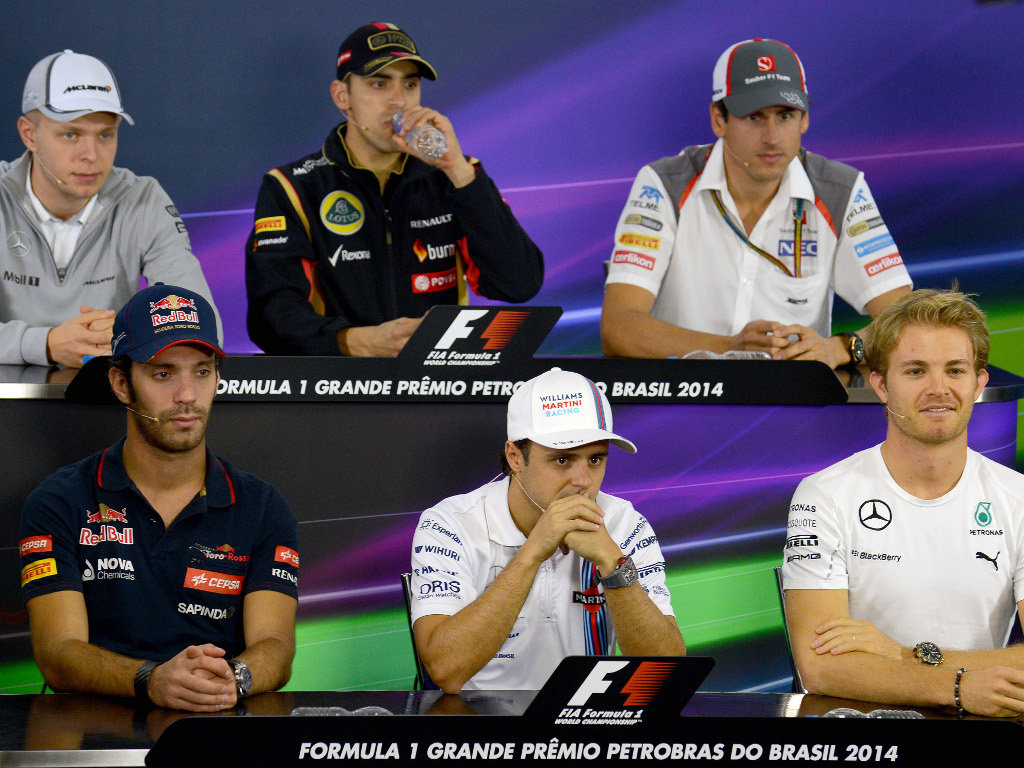 Q: Nico, if we could start with you? It’s the first time this year, in this championship, that the championship itself is out of your hands, in the sense that two wins, here and in Abu Dhabi, won’t be enough. Do you feel you need to rely on a little bit of luck then and this venue might provide it?

Nico ROSBERG: Yeah, it’s clear that I need to rely on something happening. Yeah, for sure there’s not enough for me to win, unfortunately, but that’s the way it is. Anyways, in sport so much can happen, so I’m still very optimistic.

Q: You had a rich run of form from Monaco through to Hockenheim. How would characterise the period since then?

NR: A less rich run of form! What is it? Lewis has done a little bit of a better job since then. That’s it, pretty simple, but as I say, still two races.

Q: OK, thank you. Felipe, coming to you: obviously, you’re a two-time winner of the Brazilian Grand Prix. Do you feel that with this car this year is your best shot of getting back on the podium, since that great win in ’08.

Felipe MASSA: Yeah, I think so. Anyway, I was on the podium in 2012. It’s a fantastic track for me. A track that I had great results. As you said, two victories, almost three I would say. Three pole positions. I always love this track. I won many races [here] even before Formula One. So I started my career here, on the other side of the wall, which is a go-kart track, at the top. I love this place. I love the energy that I feel here and I’m really looking forward to having a fantastic weekend. I hope our car can be as competitive as shown in the other tracks here as well. We’ll see how far we can be, or maybe even in the middle of these guys here on the left [Mercedes]. Trying to get all the opportunities to have a great race here.

Q: You’ve obviously been a key part of Williams’ renaissance this year. With all the experience you have, tell us how you feel this team can become more competitive in 2015?

FM: Well, first of all you cannot forget how much we grow from the first race until now. I think maybe… I would say it was the team that grows more during the championship. It was a team that gets better, that improved the car in the top level, from the first race to the last race, looking at where we started and where we are now. So, I think definitely the team… when we started at the first test and where we are now, the team changed completely the organisation, the mentality. We are still changing, there are still some improvements we are working to be there before the first race of next year. But I really believe in this team. I think this team has everything to be even more competitive, it has everything to be fighting for victories and I really, really hope for championships as well.

Q: Kevin, coming to you, obviously clear progress for McLaren on the car side in the last few grands prix, that’s clear to see. But the car still seem to have a narrow sweet spot in terms of getting the most out of it during a race weekend. What’s going on there?

Q: Since the summer break you’ve had pretty strong form yourself personally, especially in qualifying. Do you think you’ve done enough to book your seat for 2015?

KM: I can only say I hope so. I think I’ve learned a lot. I’ve improved a lot in many areas and yeah, I’m sure I have a lot more potential even from where I am now. So, I hope so.

Q: Thank you very much. Pastor, coming to you, first points in Austin, a very strong performance. Tell us about your and Lotus’ fight back?

Pastor MALDONADO: It was a very tough season, especially at the beginning, even not able to run the car as we wanted. It was not maybe the best way to start to work with a team. But we did a great job to try to put everything together, to get better and better and at some point we decided to be focused on next year’s car. But the team seems to be quite good, very competitive in terms of spirit. They are used to being in the front. They know how to do a good car, so let’s hope the best for next year.

Q: How do you feel about opportunities for this weekend? This track is always very unpredictable and the weather forecast looks like it’s going to be pretty wet throughout the weekend. A lot of variables there. Opportunities?

PM: Yeah, the main objective is to maintain the performance we had last week in Austin, so we think, as a team, we can continue to fight for the points. That is the main focus at the moment.

Q: Adrian, coming to you, obviously Sauber have announced both their 2015 drivers, so in what direction does your future lie, do you feel?

Adrian SUTIL: I don’t know, so I will see what is possible, what I want and also… yeah, it’s quite a few things to think about and I can’t really say more at the moment.

Q: Are you optimistic that you’ll be in Formula One next year?

AS: At the moment, I don’t know. Maybe. F1 is unpredictable – but as I said, there are a few things to think about first and then the team has to comment the rest.

Q: Obviously great performance in qualifying in Austin, you must have been so disappointed the way that first lap turned out. Have you spoken to Sergio [P