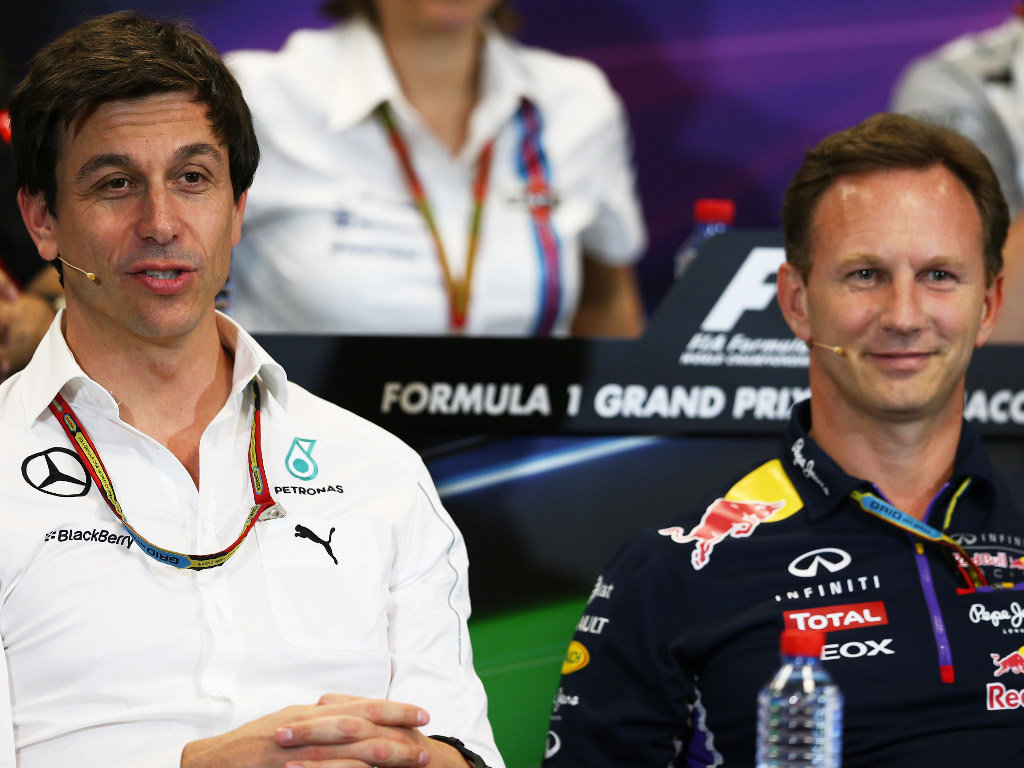 Q: Let’s start with Claire Williams. Claire a strong performance for the team in Barcelona but in some of the earlier races you maybe let a few points fall by the wayside. Where do you feel you are at and are you on the right track?

Claire WILLIAMS: I think we are in a really good position now. I think we all have to remember where we were last year and to make the performance improvement that we have over finishing P9 in 2013, I think the team have done a fantastic job to turn things around in the way that they have. We entered this season always wanting to get both cars in the top 10 in qualifying and then to score points in the race and we’ve pretty much achieved that, so I think everyone at Williams should be really proud of what they’ve achieved. I think you can always look back and go ‘I wish we could have done a bit better’ and we potentially could have scored a few more points but I think we should all be pretty pleased with P5 in the championship at this time.

Q: Thank you for that. Moving on to Federico. Quite a progression for you from Melbourne to Barcelona, in just two months, and a promising test after the grand prix, where do you feel your team is at in the development cycle and which teams are you targeting to challenge at this point?

Federico GASTALDI: Well, we have done, obviously, a progress from the start of the season but we’re still working on it; we’re not where we want to be. We want to be in front of our friends with the red jacket, as we were last year, fighting in that position. So that’s our target pretty much – to go back to where we were last year.

Q: Thank you for that. Moving to Eric. Obviously you’ve had a few months now at McLaren; what have you discovered, what changes would you like to make and how will you manage the split development programme as the year goes on between the 2014 car and the 2015 Honda car?

Eric BOULLIER: Yeah, it’s been a few months. Obviously it’s a great team. It’s an institution I should say. I did settle in very well. Obviously we are not performing at all where we should be or where we want to be, so there is obviously a lot of time to spend to go through as a company and find out to what needs to be fine-tuned or changed to make the team better. It’s true that actually it was a last week debate about the transition between 2014 and 2015. It’s a decision we have to do shortly shall we say because obviously as you know most of the teams switch their resources during summer and like usual I should say. This is where we will be but we have started already to work on next year’s car.

Q: Christian, tell us about the opportunity that this race here in Monaco presents to Red Bull at this stage of the season and also the progress going on behind the scenes to catch Mercedes on a regular basis.

Christian HORNER: Obviously Monte Carlo is a unique track and it’s layout, the nature of the circuit, doesn’t put such a premium on straight-line performance, which has been our weakness this year. So we’re hoping to give these guys [Mercedes] a run for their money this weekend. For sure they’re going to be strong again here. They’ve always been strong in Monaco. But we’ve had a solid day today, the drivers have been feeling their way into the circuit and working on the set-up and it’s been an encouraging start to the weekend. Obviously when you consider where we were pre-season to where we’ve come to at this stage, we’ve come a pretty long way in a couple of months and hopefully if we can keep that rate of progress up then we will be able to challenge the two Mercedes drivers before hopefully too long in the future.

Q: Coming to you Toto, it looks like it’s going to be another close one between your two drivers, Lewis Hamilton and Nico Rosberg, this weekend. What does that battle look like from inside the team and how is it to manage?

Toto WOLFF: It is of course a nice problem to have, to have two cars up in the front battling with each other. They do it fair and square. We haven’t seen any incidents up until now and I hope we can sustain that. Having said that we musn’t be complacent, because Red Bull… Ricciardo was very close today and obviously Monaco is a track where horsepower doesn’t matter so much and straight line speed doesn’t matter so much, you can see that the gaps have narrowed a bit today, at least from what you have seen in free practice one, so interesting times.

Q: Coming to you Marco. Welcome to your first FIA press conference. A rapid learning curve for you. Do you already have a vision of the kind of Ferrari team you want to lead.

Marco MATTIACCI: I would be extremely arrogant in saying that we already have a vision. Definitely we are having a picture, a quite accurate picture of the problems we have experience so far. It is clear the gap toward the leader of the championship. So we are clear what are going to be the next steps. I wouldn’t say vision, we know that we need to have a continuous improvement every race and that’s the way we are working. We have a lot of assets, as I have said, very positive people, drivers but definitely there is the need to improve dramatically.

Q: Okay, a second question to all of you. The current situation is that the teams have agreed to pursue cost control through technical and sporting regulations. How is this process developing? Claire, would you kick us off with that one?

CW: I think the most important thing with this consideration is that everybody is committed to ensuring that we can drive down costs in Formula One. So there is a lot of work going on behind the scenes with the full group of team principals and then within the Strategy Group as well and as long as we keep working hard then I believe we can drive costs down for the benefit for everybody in our sport.

FG: Same thing here. We are all working very hard together. It’s good that all the teams are in the same boat. We are all trying to reduce the cost. It would be good for all of us to go into a different direction at this stage and try to make things easier for most of us.

EB: I think Claire said everything. It’s true that as long as everybody has the same aim to go for cost reduction then we should achieve something which is reasonable.

CH: I think the key place to reduce the costs is in the Sporting Regs. That’s where the biggest cost drivers are, so there is a lot of focus on that in the different groups. I think there is some constructive discussion. I would think so far we’ve probably saved about €10,000 but we’re going in the right direction and hopefully through the process of the next month, before regulations are fixed for next year, we can come up with some significant savings.

Q: Toto, anything to add?

TW: Yeah, I think it’s a very productive process. Obviously getting everybody under the same roof or agreeing to the same principal is very difficult because the teams have very different agendas from the very small privately owned team to teams representing multinational, global companies or a branding exercise. This is quite a difficult, painful process, but I think we are at the stage where we have recognised that we have to do something. And although we are only at €10,000 I’m hopeful that it’s going to be more in the next couple of weeks.

Q: Marco, your thoughts on this process.

MM: I have had also so far two meetings and I think that definitely there is a very string intention to reduce costs. Probably we need to be all aligned to make a productive and tangible step. Having said that I think we can do more, having always in mind that Formula One has to provide the best possible technology and entertainment and that’s clear to all the stakeholders here at the table. But definitely we are doing some productive steps in that direction.
QUESTIONS FROM THE FLOOR

Q: (Livio Oricchio – Universo On Line) It’s a question for all you? What’s your view about the fact that Barcelona the pole position this year was 4.5 seconds slower than last year and the fact that pole position in GP2 would permit the driver to start in 14th position on the grid. And specifically to you, Mr Marco, did you invite Adrian Newey to work at Ferrari?

MM: First of all I think they are doing an excellent job. We need to recognise that Mercedes has the leadership because they have been working in an excellent way. Having said that is it good for the audience? Is it good to entertain the public? I have some doubts about that. But there are different avenues that we are discussing about that issue, as I said, you know to reduce costs and in order to deliver a better product in Formula One.

Q: And do you have a specific response to the Newey question?

MM: If I invite Adrian Newey to work at Ferrari? No.

Q: Let’s get some other responses to the question about the four-and-a-half seconds in Barcelona. Eric, let’s start with you?

EB: I think if the cars are slower obviously there is some technical reason for that and there is some aim with the technical regulations to make the cars slower. All the cars are shall we say aerodynamically less performing. We lost obviously the blowing at the back of the car. Tyres are more conservative than last year and obviously the new engine, power unit let’s say, is different to manage, so I don’t see any downside to be slower, because historically every time there was a big change of regulation the cars were slower and obviously this is to keep the excitement let’s say within the engineering group to make sure you know that we can recover the speed over the next months years. I don’t know how long it will take but I’m pretty sure we will recover some speed. Then the second question about the GP2 pace. GP2 should maybe go as well for a cost reduction programme, which will maybe make the cars slower as well.

Q: Claire, anything to add?

CW: I think everyone’s really answered it, what I would like say. We’re here to put on some great racing and this season has delivered some fantastic races so far, from the front of the grid to the back of the grid.

FG: Same thing; I agree. It’s new regulations, we all agree to go through this and now we are working to try to give the best show. That’s what we are here for.

TW: It’s an interesting question and if you look at the timing screens you get a completely false picture. If you cut back the aerodynamics by 25 per cent, if you cut back the blowing, you have different tyres, you can’ expect the cars to go quicker. On the straight in Barcelona, the fastest car was doing 347kph compared to 318 last year. So in Monza I don’t know what we will be seeing, but 380 maybe? So the point is we have lost downforce and this is the main reason the cars are slower.

Q: Anything to add Christian, finally?