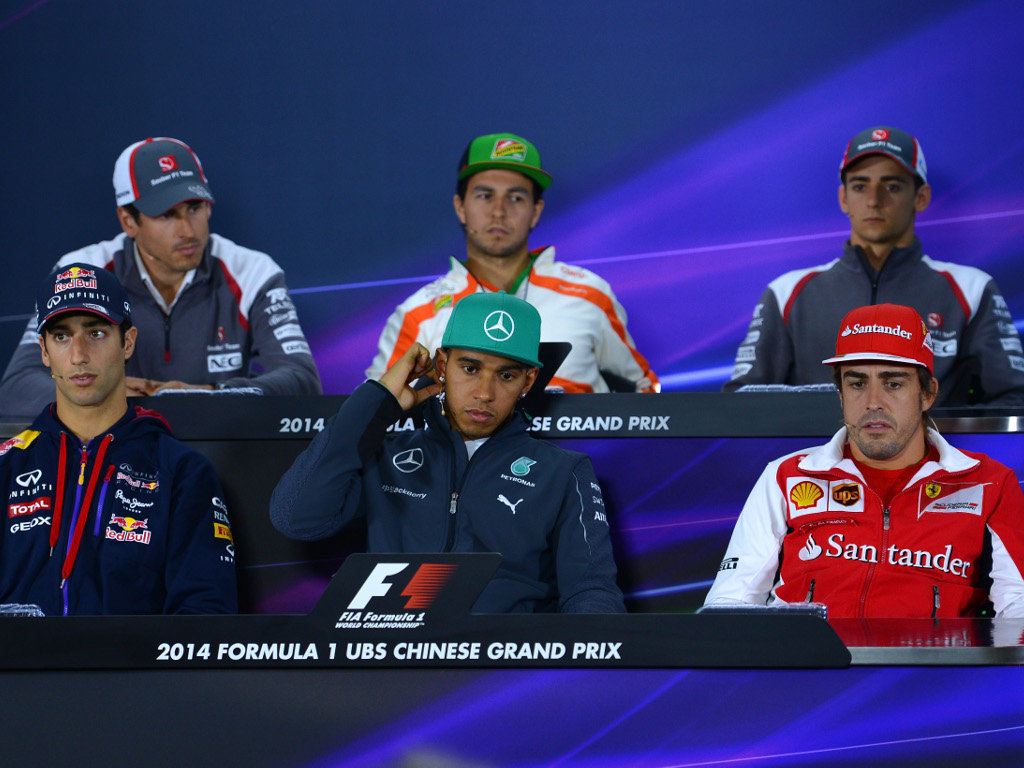 Q: Daniel, some bad news earlier on at the start of this week for you, what was your reaction to that?

Daniel RICCIARDO: Obviously a little bit disappointed but at the same time I had moved on already. I think Sunday night in Melbourne the damage was already done and I went from a big high to a pretty big low, so I’d sort of already moved on. I hoped but didn’t really expect too much to come from it. So that’s it. I’m here now in Shanghai and that’s it. There’s no more ifs or buts, it’s here, I have 12 points and i just have to play catch-up.

Q: Fernando, it’s also been an interesting week for you with some interesting news from the team.

Fernando ALONSO: Yeah, there has been some news from the team and we’re here to try to improve the situation a little bit, be a little bit more competitive, more than we have shown in the first three races. We’re here to fight back.

Q: Is that slightly unsettling for you?

FA: I think we need to be honest with our situation. It’s not where we wanted to be. I think there is a lot of room to improve. We need to become better in all the areas from the car. There is a long way to go, the championship is very long and we know that probably in the first (part) of the championship we will not be as competitive as Mercedes or some of the teams that now they are on top but as I said we need to maximise what we have in our hands now, try to score as many points as possible and hopefully we can be very competitive later in the season.

Q: Lewis, a fantastic race for you in Bahrain and an interesting quote from you saying it was a “real racer’s race”, using the skills that you had acquired as a karter. Are we going to see lots more of that and have you had a look at the race and seen what was happening all the way down the field?

Lewis HAMILTON: Yeah, it was quite an exciting race, I got to spend some time at home with the family at the weekend and we watched the highlights. Yeah, it was quite interesting to see the duel between each team and between team-mates. As I said it was a bit more like a go-kart race. Whether or not it will always be like that… that was a great race, I hope there are more races like that through the year.

Q: It was always interests me, as a karting dad, as I have been, when you guys start talking about karting and how it is the purest form of racing. It’s extraordinary that you can race like that, almost like a karter, in a Formula One car.

LH: Yeah, it is. You don’t see it too often. Obviously in karting you don’t have downforce, you just have mechanical grip, so it is more exciting in general. But to have the staggered tyres, difference between different cars enabling that racing in the last race was quite unique.

Q: Well any time you like; we’d like some more of it. Esteban can I come to you now? First of all, you said this was one of your best races last year. Obviously we saw you end the last race in not the best way and hopefully there is no lasting damage but tell us about this race from your point of view.

Esteban GUTIERREZ: Well, yes it was very challenging, especially as the performance at the moment is not where we want to be and this puts everything in a very difficult position. The whole team is really pushing very hard, we are trying to recover our pace and to really be where we belong and where we are aiming to. We have a great team behind and everyone is pushing very hard to achieve that very soon, hopefully very soon.

Q: And you were perfectly alright the next day after the crash?

EG: Yeah definitely. Nothing happened. This was the most important thing on the weekend and on the incident as well, apart from really actually what happened. Afterwards it was just necessary to do all the check up and be sure that everything was fine.

Q: Sergio, obviously an excellent race for you in Bahrain as well. What is it that’s making Force India so competitive at the moment?