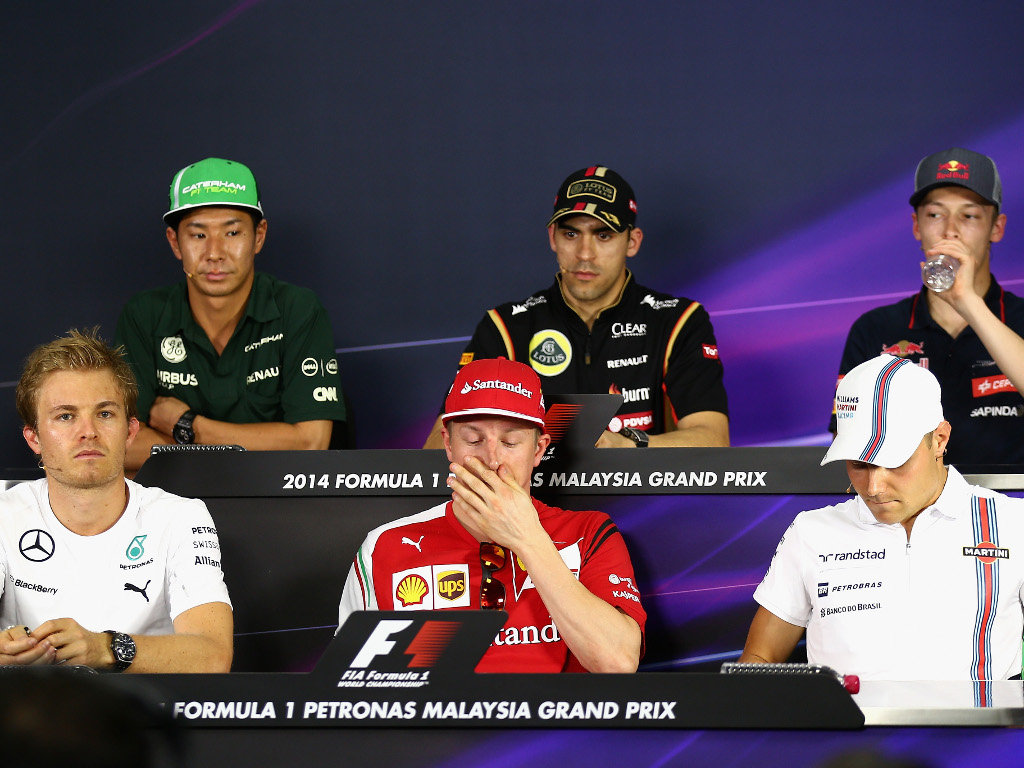 Q: Valtteri, we’ll start with you. Quite a race in Australia, 15th to sixth, hit the wall, back down to 15th, back up to sixth again, very eventful. But what do you think was possible that day?

Valtteri BOTTAS: Yeah, really eventful. If we look at it as a whole race we need to be happy. With the result we have more points, double the points than last year. So it’s a good beginning for us but it could have been better. We could have definitely, without my mistake, been fighting for the podium.

Q: Tell us a little bit about what these cars are like to drive. Obviously less rear end stability, more of a handful into and out of the corners. How are you finding it so far?

VB: Yeah, the cars have quite a bit less downforce than last year so you’re sliding a bit more, with more engine power also it makes it a bit more tricky, but I like it. I really think the cars are good fun to drive. I hope it looked good from outside I think we made an exciting race with the new cars, new engines, so I think it’s good.

Q: Coming to you Daniil. Obviously the youngest ever points scorer with that result in Australia at the age of 19. How do you feel about that and the start you’ve made?
Daniil KVYAT: It was a good race, also eventful for us. It was everything new for me, so obviously many things to learn during the qualifying, the race, so it was good. P10 is an OK result but we always want some more. In the end, we would always like to get some more points in the future and the more we get the better it is.

Q: I wonder if you could talk about the step up [to Formula One]. Prior to this the longest race you’ve ever done is 35 or 40 minutes, before you raced in Australia and then of course, the challenge of this weekend in particular so soon [into your F1 career]?

DK: Yeah, you’re right, it was a very long race but I found a good rhythm and it wasn’t looking so long anymore. Here it’s going to be a bit different because it’s much, much warmer. Let’s see how this challenge will be done. It’s hard for me to say now but for the moment it’s looking pretty hot but it shouldn’t be a big problem in the end.

Q: Coming to Kamui. Welcome back to Formula One. How does it feel to be back?

Kamui KOBAYASHI: Hi, first of all I think I have to say it’s great to be back in Formula One. I think after one break doing like GT… I think definitely I enjoyed GT but Formula One is one of the top categories and I also think I was missing the development and of course racing with the top drivers, which I think is one of the most exciting times, so I’m very happy to be back.

Q: Obviously, quite a tough opening weekend for you in Australia. What has the team learned, first of all about what happened at the start and also about the general problems you suffered at the weekend, and how much have you been able to put right?

KK: Well, first of all, unfortunately I think that in 2014 the first crash is myself is not really good! But it’s not really fault, it’s coming from the system. I do anything without the rear brake and that was the first proper braking. I mean, at this point I felt straight away, I felt panic, I was a little bit crazy because my car doesn’t stop and I can’t avoid… I feel very sorry for Felipe, just… I don’t want to crash of course like that and I don’t want to end up like that. That’s what happened, a racing accident, so I think we have to find what is really the problem, but we have to find out that it never happens the next time. I think through the week, I’d say it was a very difficult week for us because we missed the complete Friday and we went to FP3. Unfortunately we had not much time to change any settings between practice and qualifying. So, I think we went to Q2, which is very happy but I think we have to look at more potential from what we have. Still we didn’t bring any potential from the car. S I’m quite excited, looking forwards to this weekend. This week is our home race, so it’s very important to having a great result and of course I think a lot of Malaysian fans are excited about Formula One, so hopefully we can achieve something.

Q: Pastor, obviously, like Kamui, it was a tough weekend for you in Australia. Not too many laps on the board. How much has the team been able to do in the time since then?

Pastor MALDONADO: The pre-season, it was quite tough for us. We’ve been working very hard and trying to push to solve all of the problems. These kind of problems, when you get at the bottom of the problem, you see that they are not huge problems: easy to fix but it took so much time from the test. In the first race again. So I think we miss free practice, even on Saturday, quali, so we’ve not been able to do proper long runs and to see our real potential of the car because of this kind of issues we’ve had. And now I hope to have a better weekend. We’ve been working hard again to try to improve. We improve quite a lot for the race. We had never been able to run for more than 10 laps together and during the race we did more than 30 laps with both cars – which is a step forward. Now we are fully focussed on finishing the race and I think if we finish the race we will be in a good position to fight for good places.

Q: From the running that you have done, what’s the car telling you? What does it feel like? Are you optimistic about the potential of this car?

PM: It is very difficult to say, just because everything is new for us. We will need some more time in the car, especially to explore the potential of the car. It’s very difficult to say. The feeling is not bad but against the other teams we need some more time in the track and try to do our best to catch them. I think it’s going to be a very tough beginning of the season but again things are changing quickly in Formula One. We’ve been working very hard, the team is quite good on reacting and hopefully this race will be much better for us.

Q: Kimi, seventh in Australia and a bulletin from the Ferrari team since then with some quotes from you saying that one of the problems was the brake-by-wire system in particular. Would you give us a bit more detail on that?