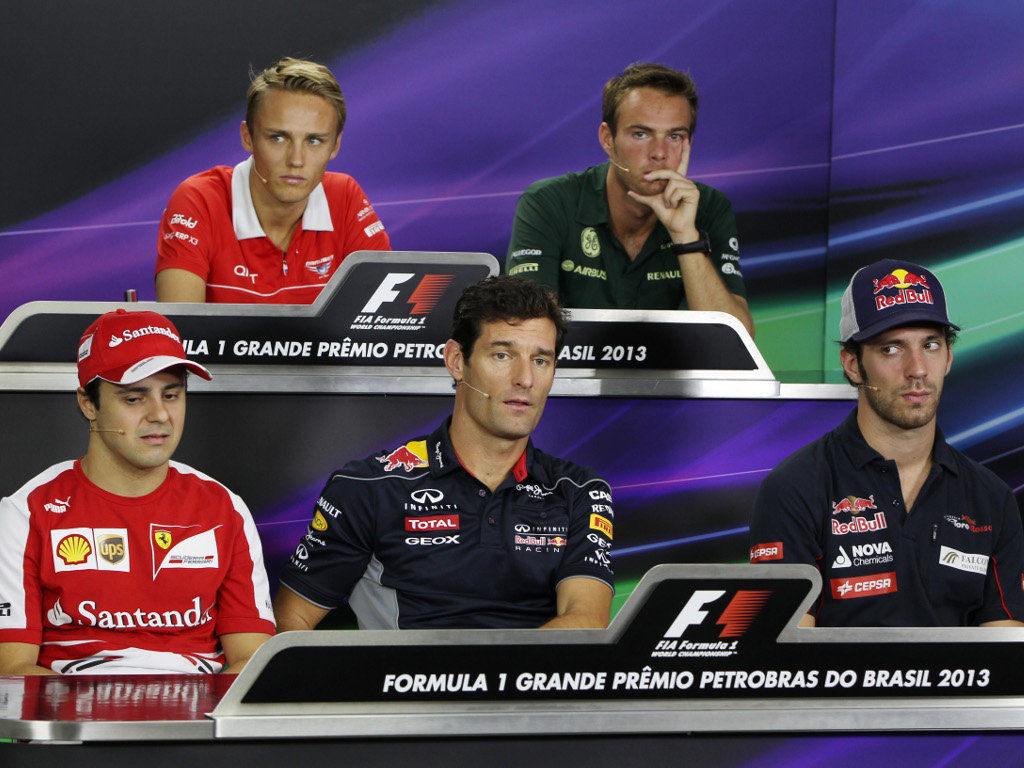 Q: I’ll start with you Mark: 215th and final grand prix start this weekend. I know you’ve had time to come to terms with your retirement from Formula One but when you climb into that Red Bull for one last time, it’s going to emotional isn’t it?

Q: What do you think you might miss most of all?

MW: There are certain situations in Formula One that are super rewarding. Obviously driving the car on the limit at certain venues is still very satisfying, no question about it. You’ve got Suzuka, Spa, Monte Carlo, come qualifying day and even racing, at certain circuits it’s very challenging and rewarding. So I’ll miss some of that. But I’m on a little bit of a slippery slope now, in terms of… you’ve got to be careful not to test it too much in terms of performance and what you used to be able to do. I still think I’m driving well but I don’t want to be around not driving well. So it’s inevitable that you’re going to miss certain parts, for sure the adrenaline and working with people like Adrian Newey. Stuff like that you don’t get to do that often obviously. That’ll be something I’ll miss a bit. But there comes a time when you’ve got to let go and I’ll still have good adrenaline next year obviously with Porsche and that’ll be a good balance.

MW: I think the hardest and most difficult cars to driver were in the mid-2000s, when we had all the refueling and the tyre war. Those cars were tricky and you had to push every time you went out. There was no such thing as pacing at any point really, in qualifying, practice or Sunday afternoon. So it really was a tight envelope for a grand prix driver in those eras to operate but that’s what we trained [for] and we aspire to do. They were good times. Obviously a lot of power too, the V10s had plenty of horsepower. So the lap times floating around then were pretty impressive, and in the early 2000s as well to a degree. We’ve had a lot of changes in the last three or four years. The racing has gone through some boring phases, so we’ve introduced some DRS, things like that, things that have been of benefit to the sport. It’s taken a little bit of the tradition out of it I suppose, some of the passing moves and things like that, which probably which are not as difficult to achieve as in years gone by. They are achievable now. That’s a little bit fabricated but good for the neutral at home. Tyres – we’ve had some challenging times on those as drivers, and as teams, trying to understand particularly the new brand of heavily modified pace during races is probably not as rewarding as it was. But you can’t always have it. I’ve driven in so many different regulations… one championship but with so many different scenarios but generally you just have to enjoy it, it’s your job.

Q: I’m sure you’ll be greatly missed by everyone here in the paddock. Good luck for the future. For you, Felipe, it’s the end of an era too. Your association with Ferrari, which begun in 2006, comes to an end and what a place for it to come to an end – your home race, at Interlagos.

Felipe MASSA: Yeah, definitely. It’s a fantastic place to race and to finish an incredible time with Ferrari. It’s a very long time. It’s our eighth championship but I’ve been inside Ferrari even before Formula One, so it’s a long time and I need to say thank you to all of them – everyone who worked together in Ferrari. Stefano as well. You know that he is a big friend and he did a lot for me as well, Domenicali. Everybody, everybody I worked with together. I hope we can enjoy the last race here in Ferrari and having a lot of fun and having a good result as well to have even more emotion at the end.

Q: Do you pinch yourself when you think back that you spent eight years with Ferrari, the team that every boy racer dreams of racing for?

FM: Yeah, I mean I think Ferrari is a dream for all the drivers. I remember, one of the first go-karts I had was red. My first overall was red, so I was always supporting Ferrari as a kid. So racing eight years for Ferrari is definitely a dream come true. So, getting old as well! But also it’s another re-start for my career. I’m really happy and looking forward to my future in Williams, a different team. So really, a lot to do still in Formula One.

Q: How important for your morale was it that Williams had the faith in you to extend your Formula One career, to take you on and try and restart a period of success that they’ll be hoping for from next season? And also, how important is it for the sport that a Brazilian driver still stays in Formula One.

FM: First of all, I really believe I can do a lot with Williams. Everything is changing, brand new rules for the championship so I think it’s also a good time that we start something new, different. You never know, you’re doing a good job in a team that has also all the infrastructure to do – like Williams has – everything inside the company to do a good car. So everything is possible. They believe in me so I’m really happy and motivated to drive for them, to work and to do everything I can to help the team to be competitive again, which I’m sure everything is possible.

And how important for a Brazilian to stay in Formula One?

FM: It’s very important. We know how important is Brazil in Formula One: the history for so many drivers, so many championships, so many victories. For Brazil, Formula One is very important. We have motor racing in the blood. So, it’s very, very important to keep Brazilian drivers in Formula One, and also, we’re not having a great time in Brazil for the small categories, so I think it’s important to give a push and help for our future – because for the moment it doesn’t look very nice. I’m trying to help and give some good ideas for the Federation to help and pushing for our future.

Q: Jean-Eric, your second full season in Formula One. How difficult has this year been for you? Off the track when Mark announced he was retiring there was the hope of a Red Bull seat, tantalisingly close but it never ultimately came your way.