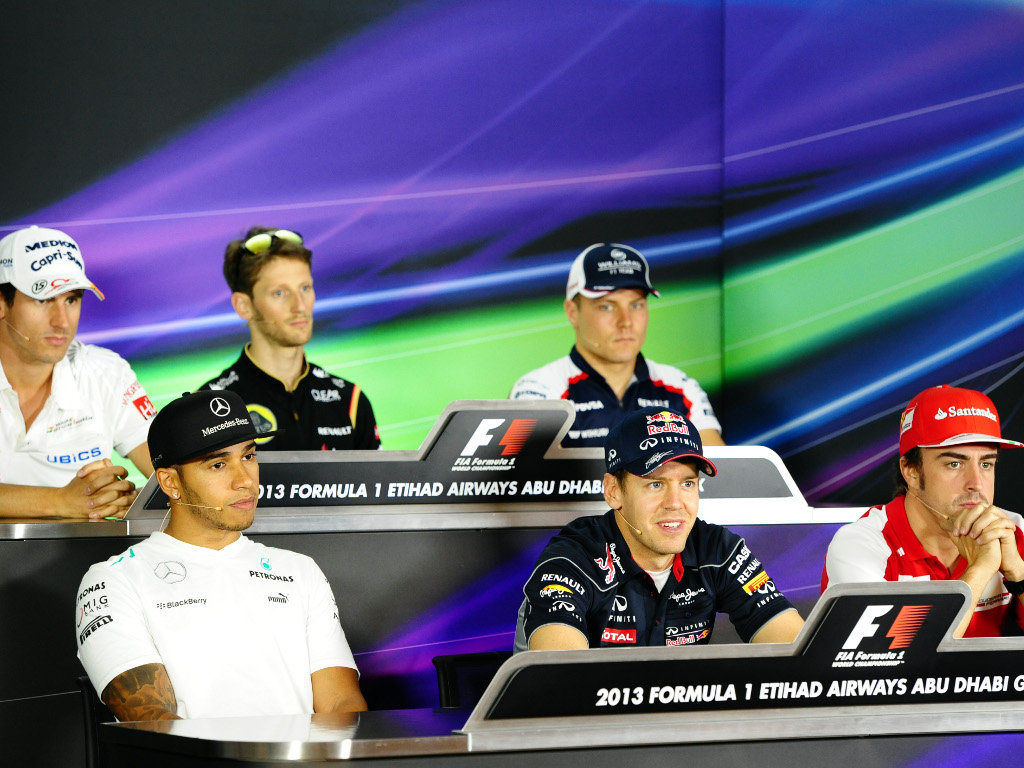 Q: Sebastian, your fourth world title of course. Tell us about the last four days. What have you been doing, how have you celebrated and what has the reaction been like?

Sebastian VETTEL: Well, the reaction has been very positive. Obviously great relief when I crossed the line on Sunday, a great feeling. Sunday night, obviously the whole team still had to do the pack-up, but we had a little bit of fun in the hotel bar – quite spontaneous. Obviously, there’s not a lot of time between the race in India and the race here, so the team is very busy. So we couldn’t go completely made, but I had a time on Sunday night and then I had two days at home before coming here, again fairly quiet, not very spectacular. I just enjoyed the peace at home. I had some time for myself, back with my girlfriend as well. So, fairly quiet.

Q: Probably history will remember this achievement as you in a strong team with a strong beating a very strong field of drivers – looking at the gentlemen sitting around you here. Is that how you see it?

SV: I think that’s the way it always has been. When Lewis won his title in 2008 he was with a strong team facing strong drivers, same for Fernando in 2005 and 2006, so yeah, even 20 or 30 years ago it has always been the name of the game. That’s how people remember the past and one day will remember what we are doing now.

Q: Fernando, runner-up again. So hard to hit the sweet spot in Formula One isn’t it? How far off championship level do you feel your group is?

Fernando ALONSO: I think we need to be realistic, knowing that we didn’t have the chance this year to fight for the championship. In the beginning of the year we were a little bit closer but then we were not quick enough and we are fighting now for other targets, which is the Constructors’ Championship and second place in the Drivers’ [Championship] as well, which was not the main priority when we started the season but still a good target to achieve and a good thing for the team, to help them. We’ll see, I think we need to keep very focused in the remaining races and try to do our best and obviously with half of our mind thinking of 2014 because we are competitive people, we want to win. This year it was not possible but next year we start from zero.

Q: How has your relationship with the team evolved over the course of the year, particularly in terms of steering a course for the future?

FA: It’s fantastic. Obviously, every weekend I repeat the same thing. So I guess in Austin on Thursday the first question in the press conference will be how is my relationship with the team…

Q: The question was how has it evolved?

FA: It was perfect, it’s perfect and it will be perfect.

Q: Lewis, coming to you. You didn’t perhaps expect to challenge for the title this year but can you talk about the level of the challenge coming from Sebastian and Red Bull and how you take the fight to them from here?

Lewis HAMILTON: They’ve done an incredible job for some time now, so you know, they’ve raised the bar and everyone just needs to work harder. Us, as a team, we’re working as hard as we can to really put the energy into next year and hope that we can compete with them. That’s ultimately what I’d love to do and ultimately what the team desires too. That’s what the dream is. There’s a long steep curve for us to climb or hill for us to climb for next year but it’s more of a level starting ground for everyone and you can either get it right or wrong. Hopefully we’re on the right side.

Q: Racing drivers always move on very quickly and I wonder if mentally you’re already in 2014.

LH: No, no. I’m still trying to… this year hasn’t been perfect for me and I’m always trying to learn and improve. There are lots of areas that can always be improved on, from myself and from the team, and we’re just working on those because we don’t want to carry the negatives of anything we have into next year.

Q: Romain, really strong run of form at the moment. Was India your best performance yet in Formula One, do you think? How much more is there to come from you?

Romain GROSJEAN: Hopefully two more places! It was certainly one of our best races. We misjudged our level of performance on the Saturday and we took the right decision about the strategy, how to go for the race. It was clearly not an easy one as I really had to first make the option tyre last and then try to make the prime tyre last for 47 laps. There were some quick cars around me, especially behind me, and yeah, just try to take care as much as we can of our tyres and do good driving. But I think Japan was a pretty good race. We had certainly a fantastic start and led the race from there, which was somehow easy to control in the first part. I think Red Bull was just a little bit too quick behind but when you watch the gap with Fernando who was P4, it was quite big, so I think those last four races have been pretty good: trying to improve myself every time, car is getting there and clearly the blue cars are still a little bit quicker than we are – but we try to push them as much as we can.

Q: Let’s cut to the chase: you’re a completely different racing driver from 12 months ago. What’s the key to the turnaround do you think?

RG: I don’t think there is any particular key to be honest. We like to put some things are changes but to me the work started a year ago and I’m improving myself day after day – or I’m trying to. The start of the season was poor. It’s a bit of a shame when we look at what we are capable to do right now but then since we put back the car in place it has been getting better and better. I was a bit unlucky before Germany and then Germany things turn out to be well together and from there we had very, very good races and the car is doing well. Hopefully it’s going to be the case until the end of the season.

Q: Adrian, strong drive in India, bold strategy. How important was it to stem the recent tide of Sauber getting closer and closer to you? And how much confidence has that given the team going forward now for the rest of the year?

Adrian SUTIL: Well it was an important race for us, of course. It was our home grand prix and we wanted to show that we’re still able to be in the top ten. The last couple of races were a bit more difficult to score the points but we recovered and we did what we could to make a good result. We risked a little bit with the strategy – where we had both cars on a different strategy. I was on a one-stop – more risky – but almost the same outcome. Eighth and ninth position was almost the maximum we could achieve. Six points as a team, now 23 points ahead of Sauber, which is quite a good gap. It’s not