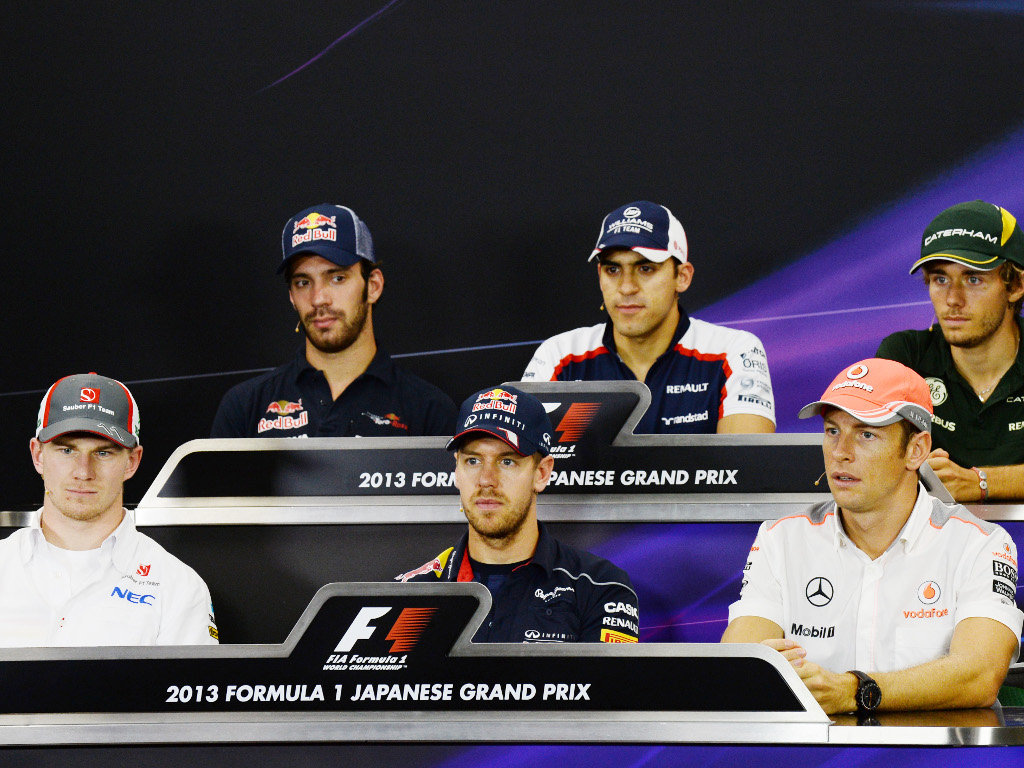 Sebastian VETTEL: I think generally we race on the best tracks in the world and, as I said, I think Suzuka is one of the best, if not the best, in my point of view. As a driver, just going through the first sector is fantastic, with the high-speed corners. It’s a track where we really get to challenge ourselves, get to push the cars to their limits and obviously it’s much more intense feeling the car at the limit in a high-speed corner rather than in medium or low-speed (corners). There are quite many around here. It’s a very tricky track, very challenging. Another great corner, I think, is Spoon, which is off-camber on the way out and therefore it’s quite tricky to keep the car on the right line. So, all in all, it’s a place where we love to race. On top of that there is a fantastic atmosphere, crazy Japanese fans. They are very passionate about us coming here and I think all the drivers we do get a lot of respect when we come here but equally a lot of support.

Q: Jenson, an extraordinary record here – you’ve finished all 11 of your races here, plus the two in Fuji as well. Your thoughts on Suzuka?

Jenson BUTTON: Yeah, I’m not sure that’s really the best record to have around Suzuka but, yeah, it’s great to be back. I love this circuit. I think most of us do. It’s a very unforgiving circuit. Very fast and flowing, especially from one up until, well, actually, after the second Degner. It’s a really good section up there. So, very enjoyable. It’s a tricky circuit to overtake on, but I think the DRS zone is hopefully going to help a little bit with that. But it’s always a flat-out race, with hardly any rest. We’ve got the hard and the medium tyres here, so it’s going to be pushing all the way, which is what we love as racing drivers, especially around a circuit like Suzuka. So, hoping for a good weekend.

Charles PIC: Yeah, last year. It was my first time last year and it’s not the easiest track to learn, especially the first sector because it’s very fast. But definitely it’s one of my favourites. I think it’s one of the tracks, with Spa, where you get the most sensation out of the car. I like it very much.

Pastor MALDONADO: Yeah, this is my third time here. Very nice track. I agree with all of them – it’s one of the best of the season. I think all the drivers are very happy to be here. The fans’ community is very big. It’s a special weekend. I hope to do my best to be in the points again this year.

Q: Jean-Eric, 13th last year, what are your thoughts on the circuit?

Jean-Eric VERGNE: It’s a track that I love. Obviously all the drivers love it. It’s a great atmosphere. You can really feel the whole history here. Obviously, as Spa, it’s a track where you can, in a way, stretch the legs of the car, which is a really nice feeling.

Nico HULKENBERG: Last year was a good race for us. Also one of my favourite circuits. I think everything else has been mentioned by these guys.

Q: An individual question for you all. Sebastian, also you mentioned last weekend that the car was very much on the edge. We see these extraordinary performances from you, almost weekend after weekend. How easy or how difficult is it to drive?

SV: I think it’s never easy. Obviously I think the car, don’t get me wrong, it’s on another level when you compare for example with Charles’ car, there is a difference for sure. But no matter how quick the car, in the end, makes it around the track, you will always push the car to its edge and try to get the best out of the car. We obviously have been to Korea to a couple of times and we know the trend of the track, especially throughout the race – the front right is on the limit. So, therefore, you obviously try to set up your car to fight that sort of problem and, yeah, I think overall it’s never easy. We had to push a lot in the race. We were under pressure from behind with Lotus. Obviously we were strong enough to always have a little bit of a gap but yeah, you could not, unless maybe in the last two laps, I could not lean back and rest too much.

Q: Jenson, somebody very close to you a few years ago said you were becoming a Honda man through-and-through. That possibility emerges again in 2015 if you’re still with McLaren. What are the chances?

JB: There’s a chance, yes. There’s definitely a chance. I think first of all it’s great that Formula One has another engine manufacturer that’s interested in coming back in. I think that’s very good for the sport and hopefully it will bring others back into the sport. Japan… it feels that Japan needs either a driver or a manufacturer in the sport. Obviously it’s been a little while since they’ve had a manufacturer and with no Japanese drivers on the grid now. It’s a country that really does love it’s motorsport, has true racing fans. The guys said there were hundreds of people out on Wednesday, on set-up day – yesterday – when it was chucking it down with rain and they were watching them set-up. That’s a true racing fan – none of this Monaco stuff! So, it shows it’s in their culture and in their blood. I think it’s very special for Japan to have a manufacturer in the sport – but obviously that’s not for another year and a half. We’ve got a long time before that and hopefully a very good year next year with Mercedes-Benz.

Q: Charles, you so nearly led the team to regain tenth place in the Constructors’ Championship last weekend in Korea. Do you think that can happen before the end of the year?

CP: We hope so. It was very close in Korea. We need 13th place and finish 14th. So… yeah… we will keep pushing very hard to get this 13th place. It’s very important for us and also to prepare well next year. So we will do everything we can.

Q: Pastor, it hasn’t been a good season so far this year. What are your thoughts on staying with Williams? Your future with Williams?

PM: For sure it was a hard beginning of the season and quite hard times for us as a team. We’ve been working very, very hard, 24 hours per day, trying to improve our performance and trying to do something different to improve the car performance and at the moment, we find some way but maybe it’s not enough to catch the teams who are quite close to us. For sure, it’s nothing to do. We need to keep trying, we need to keep doing until the last race I think. There are still five races to go. We’ve