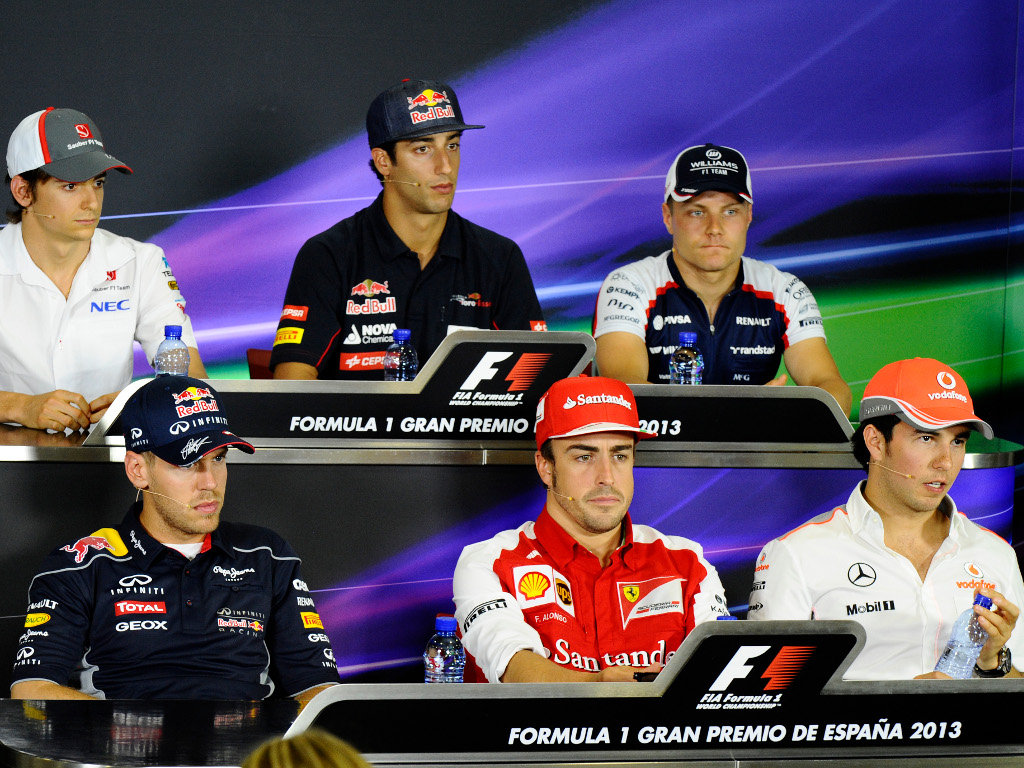 Q.Sergio, sixth in Bahrain, was that a breakthrough result for you with McLaren?

Sergio PEREZ: Considering where we started from, I think it was pretty much the maximum we could get. We came very close at the end, [fighting] with Lewis [Hamilton] for fifth place. We did a good strategy, good race pace – better than expected – so it was definitely a very positive race, especially after all the tough start to the season we had.

Q.And what’s happened in terms of discussions between you and Jenson [Button] after the disagreements over your battle in Bahrain. Where do you stand going into this race?

SP: It’s very clear between us, between the team. We had a very good chat, Jenson and myself, but also with Martin [Whitmarsh] and Sam [Michael]. We sat down after the race and, yeah, I think we were a bit too aggressive, both of us, between us, and we risked quite a lot to the team… to damage to the result of the weekend. Especially, we needed so much those points. We both apologized to the team and it was cleared. It was a nice chat to have.

Q.Thanks very much. Esteban, Monisha Kaltenborn said after Bahrain ‘he’s struggling at the moment’. Can you put your finger on why and what positives have you drawn from your experiences so far?

Esteban GUTIERREZ: Well, generally it has not been the ideal start to the season. Especially for myself, I would have liked to have a more consistent four races. When you’re competing you’re taking risks. Especially at the beginning it’s important to find the right equilibrium between being conservative and taking risks. I have made some mistakes and definitely it has not been very positive but I’m determined and focused to work, myself and also as a team. It [Bahrain] was not a great track for us and hopefully it will be better for Barcelona.

Q.Obviously qualifying seems to be the particular problem, you’re a few slots behind your team-mate on average this season. What are you experiencing now on Saturday afternoons?

EG: Of course on Saturday morning, in Bahrain for example, we decided to do a race simulation and this is not an ideal preparation for qualifying. We thought we could get some information for race performance. And of course also my driving, there are some little bits I need to improve, be more confident in the corners with the car that I have and get the most of the car.

Q.Fernando, you challenged for the win here last year and you’ve won twice on home soil. After all these years of racing in Spain, does the emotion that you feel help you, or is it something that you have to master first and keep under control in order to do well?

Fernando ALONSO: I think it motivates you to race at home and you give an extra 10 per cent on what you normally do, to take care of every detail of the weekend, starting from tomorrow’s practice, qualifying, race. You try to do everything well because you know that a nice result here, a nice podium finish or whatever will make you happy, will make the team happy, make many people in the grandstand happy. So, it’s a special weekend but after all those years I think you’re OK with that extra motivation and it’s not anymore a pressure or the emotions you maybe felt in the first year, that you really worry to do well here, for everybody that comes to support you. Now you’ve proved for many years that there’s not a pressure or anything that will stop you doing well. After doing very good results at home, so now you want to keep doing like that to really make everyone enjoy Sunday afternoon.

Q.From 22 Grand Prix here only two have been won from outside the front row, the stats say it all. Have Ferrari prioritised that in the approach to this weekend?

But I think we need to have a very, very normal weekend like we did in the first four races and try to find the right balance between qualifying and the race. Maybe the first really important qualifying will arrive in two weeks’ time in Monaco, when we know that qualifying is extremely important. I think here is still more or less a normal circuit and you need to find a compromise.

Q.Sebastian, championship leader with 77 points, three front-row starts, three podiums out of four starts, including obviously two wins, and yet one senses that you and the team have not been completely happy with the level of competitiveness so far?

Sebastian VETTEL: Disagree. I think if you look at the results that we got, we can be extremely happy in terms of how competitive we were. I think we can be equally as happy because we had a car that was good enough to finish on the podium and fight for victory, not in all four races, but yeah we won two out of four so it’s not that bad and even the third place in Australia was very strong and the fourth place in China. Obviously we didn’t have that many races yet but I think from a result point of view we can be happy but surely you’re not looking at the raw result and you’re looking at the way you achieved the result and here and there I think we had some room for improvements and that’s what we are targeting. But I wouldn’t say that we are unhappy with what we got so far.